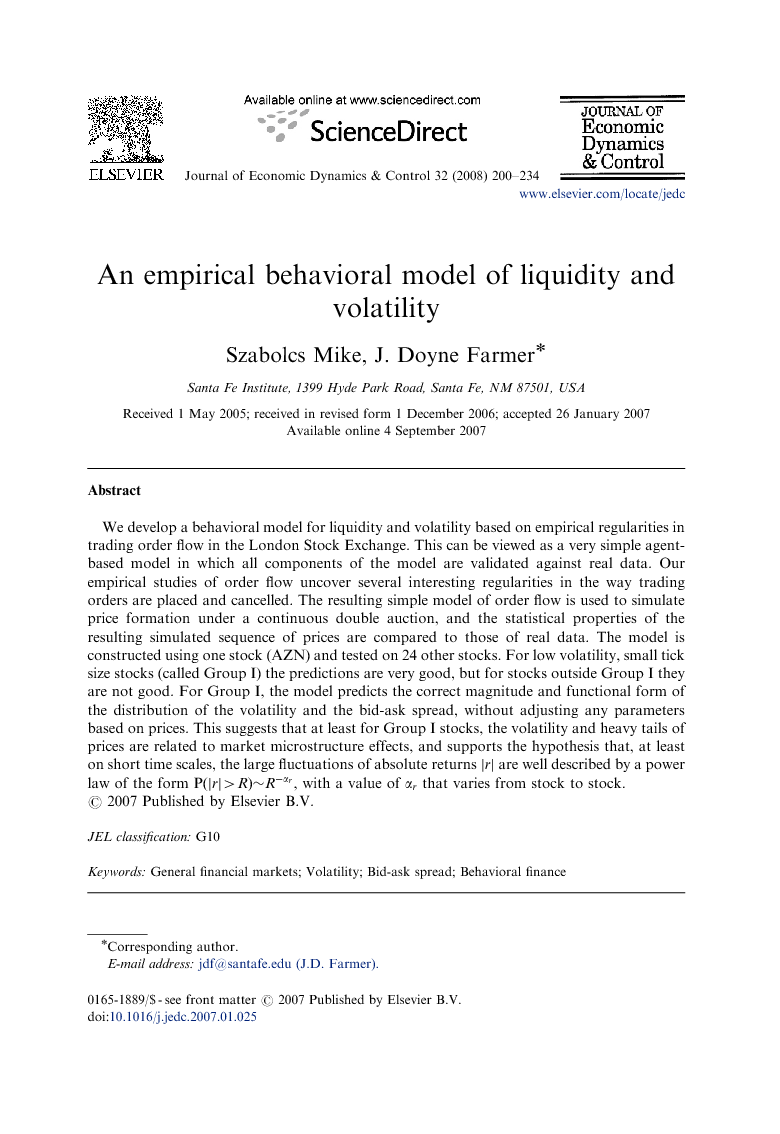 We develop a behavioral model for liquidity and volatility based on empirical regularities in trading order flow in the London Stock Exchange. This can be viewed as a very simple agent-based model in which all components of the model are validated against real data. Our empirical studies of order flow uncover several interesting regularities in the way trading orders are placed and cancelled. The resulting simple model of order flow is used to simulate price formation under a continuous double auction, and the statistical properties of the resulting simulated sequence of prices are compared to those of real data. The model is constructed using one stock (AZN) and tested on 24 other stocks. For low volatility, small tick size stocks (called Group I) the predictions are very good, but for stocks outside Group I they are not good. For Group I, the model predicts the correct magnitude and functional form of the distribution of the volatility and the bid-ask spread, without adjusting any parameters based on prices. This suggests that at least for Group I stocks, the volatility and heavy tails of prices are related to market microstructure effects, and supports the hypothesis that, at least on short time scales, the large fluctuations of absolute returns |r| are well described by a power law of the form P(|r|>R)∼R-αr, with a value of αr that varies from stock to stock.

We have built an empirical behavioral model for order placement that allows us to study the endogenous dynamics of liquidity and price formation in the order book. It can be viewed as an agent based model, but it differs from most agent-based models in that the specification of the agents is quite simple and each component of the model is quantitatively grounded on empirical observations. For the low volatility, small tick size stocks in our sample (which we call Group I), measurements of a small set of parameters of order flow give accurate predictions of the magnitude and functional form of the distribution of volatility and the spread. Our model suggests that there is an equation of state linking the properties of order flow to the properties of prices. By this we mean that there are constraints between the statistical properties of order flow and the statistical properties of prices, so that knowing one set of parameters automatically implies the other. To see why we say this, please refer to Fig. 10, where we plot the volatility predicted by the model against the actual volatility. The prediction of volatility varies because the order flow parameters in Table 3 vary. The fact that there is agreement between the predicted and actual values for Group I shows that for these stocks the order flow parameters are sufficient to describe the volatility. Of course, at this stage the equation of state remains implicit – while the model captures it, we do not know how to explicitly write it down. This model shows how market microstructure effects, such as long-memory in the signs of orders, and heavy tails in the relative prices of orders in an auction, can generate heavy tails in price returns that closely match the data. As discussed in the previous section, this reinforces the hypothesis that large returns asymptotically scale as a power law. It also means that in order for the tail exponents of price returns to have a universal value near three, as previously hypothesized (Liu et al., 1999, Gabaix et al., 2003 and Gabaix et al., 2006), there must be constraints on the microstructure properties that enforce this. The methodological approach that we have taken here can be viewed as a divide and conquer strategy. We have tackled the problem of price formation by starting in the middle. Rather than trying to immediately derive a model based on strategic motivations, we have empirically characterized behavioral regularities in order flow. From here one can work in two directions, either working forward to understand the relation between order flow and price formation, or working backward to understand the strategic motivations that give rise to the regularities in the first place. Here we have addressed the much easier problem of going forward, but our results are also potentially very useful for going backward. It is always easier to solve a problem when it can be decomposed into pieces. Going all the way from strategic motivations to prices is a much bigger step than moving from strategic motivations to regularities in order flow. By empirically observing regularities in order flow we have created intermediate mileposts that any theory of strategic motivations should explain; once these are explained, we have shown that many features of prices follow more or less immediately. At this point it is not obvious whether these regularities can be explained in terms of rational choice, or whether they represent an example of irrational behavior, that can only be explained in terms of human psychology.