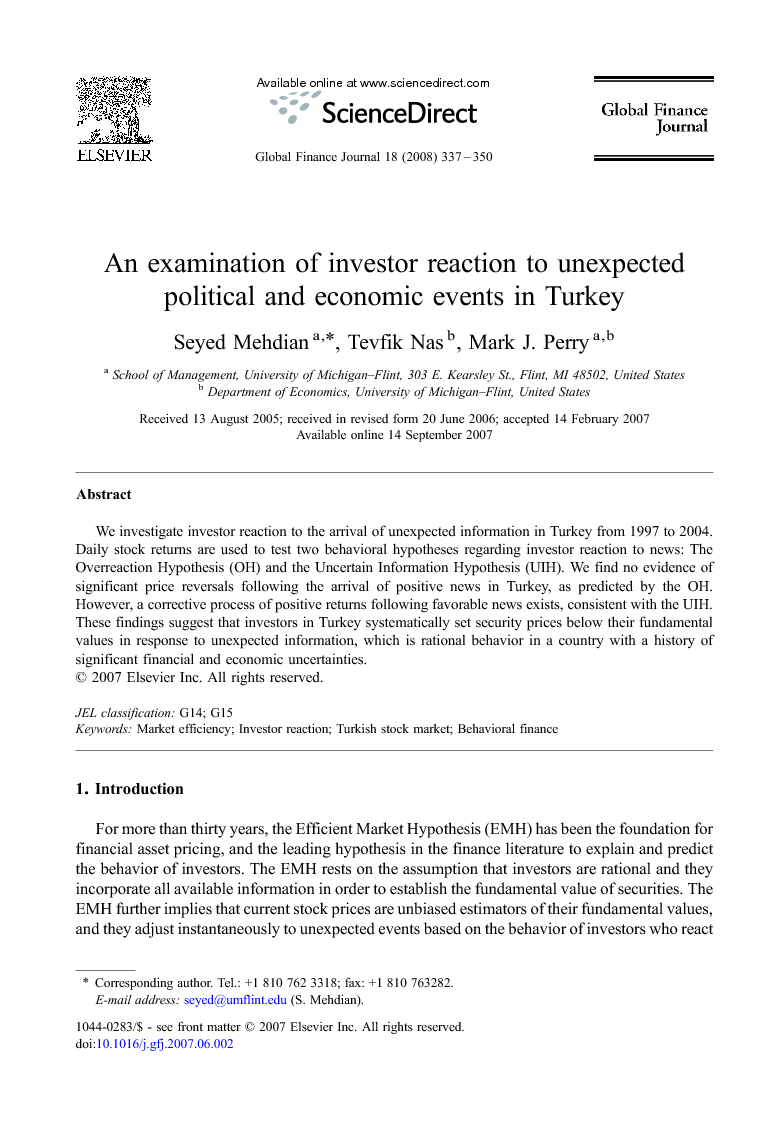 We investigate investor reaction to the arrival of unexpected information in Turkey from 1997 to 2004. Daily stock returns are used to test two behavioral hypotheses regarding investor reaction to news: The Overreaction Hypothesis (OH) and the Uncertain Information Hypothesis (UIH). We find no evidence of significant price reversals following the arrival of positive news in Turkey, as predicted by the OH. However, a corrective process of positive returns following favorable news exists, consistent with the UIH. These findings suggest that investors in Turkey systematically set security prices below their fundamental values in response to unexpected information, which is rational behavior in a country with a history of significant financial and economic uncertainties.

For more than thirty years, the Efficient Market Hypothesis (EMH) has been the foundation for financial asset pricing, and the leading hypothesis in the finance literature to explain and predict the behavior of investors. The EMH rests on the assumption that investors are rational and they incorporate all available information in order to establish the fundamental value of securities. The EMH further implies that current stock prices are unbiased estimators of their fundamental values, and they adjust instantaneously to unexpected events based on the behavior of investors who react rationally to the arrival of new information. There are, however, two extensions to the EMH in the behavioral finance literature that investigate investor reaction when security prices do not adjust instantaneously, the Overreaction Hypothesis (OH) of DeBondt and Thaler (1985) and the Uncertain Information Hypothesis (UIH) of Brown et al., 1988 and Brown et al., 1993. The Overreaction Hypothesis postulates that investors overreact to unexpected events by setting security prices too low (high) in reaction to unfavorable (favorable) news. Over time, security prices will eventually reflect fundamental values as investors process the new information. Corrective and reversal movements in security prices will follow the initial overreaction of investors to the unexpected arrival of new information. Consequently, in contrast to instantaneous price adjustment implied by EMH, security prices will gradually rise after the overreaction to bad news, and gradually fall after the overreaction to good news according to the OH. One implication of the OH is that an investor can construct a contrarian trading rule that involves buying losers and selling winners to generate abnormal returns (DeBondt and Thaler, 1985 and DeBondt and Thaler, 1987). The Uncertain Information Hypothesis suggests that the arrival of unexpected information, whether good or bad, elevates uncertainty and risk in the equity markets. In responding to the increased uncertainty, investors act rationally by initially setting stock prices below their fundamental values. An upward corrective trend in security prices will then follow as the initial uncertainty gradually subsides and prices rise to their fundamental values. This pattern in stock prices predicted by the UIH implies that abnormal returns are in general positive (or at least non-negative) during a corrective period following the arrival of both unfavorable and favorable news. Fig. 1 provides a graphical representation of the corrective movements in stock prices following the arrival of unexpected favorable and unfavorable information as predicted by both the OH and UIH. In Panel A, investors overreact to new information as explained by the OH, and there is therefore a downward corrective price movement following the arrival of favorable information, and an upward corrective price movement following the arrival of unfavorable information. This pattern of security prices implies that the corrective cumulative abnormal returns are generally negative following favorable news, and positive following the arrival of unfavorable news. In Panel B, security prices adjust upward following the arrival of both favorable and unfavorable information, as predicted by the UIH. The post-event corrective cumulative abnormal stock returns are generally positive in response to any unexpected political or economic event. Such a corrective pattern in stock prices implies that investors react rationally to the increased market risk caused by the arrival of unexpected news.From both OH and UIH, it follows that corrective cumulative abnormal stock returns will be positive in response to bad news. The OH predicts that corrective cumulative abnormal returns will be negative following good news, whereas the UIH predicts that corrective cumulative abnormal returns will be positive following favorable news. Thus, the OH and UIH offer competing, alternative predictions about corrective stock returns following favorable political or economic news, and an empirical test of post-event cumulative abnormal stock returns following favorable news can empirically determine which hypothesis is more consistent with investors' reactions to new information. The objective of this paper is to examine investor behavior in the Turkish stock market following major political and economic events from 1997 to 2004 using daily returns from the two major Turkish stock market indexes (ISE-100 Index and ISE-All-Share Index). While previous research has examined investor reaction to unexpected events in advanced stock markets like the U.S. (see Brown et al., 1988, Brown et al., 1993, DeBondt and Thaler, 1985, DeBondt and Thaler, 1987 and Kadiyala and Rau, 2004), no previous attempt has been made to investigate the reaction of investors in an emerging equity market with high volatility such as Turkey. The significant number of unexpected political and economic events from 1997 to 2004 in Turkey makes its equity market an ideal environment to study investor reaction. Additionally, whereas previous research on investor reaction to uncertainty has used a somewhat arbitrary quantitative approach to determine market surprises, without identifying the exact source of the uncertainty (Brown et al., 1988, Brown et al., 1993, DeBondt and Thaler, 1985 and DeBondt and Thaler, 1987), this study introduce a qualitative approach to determining stock market surprises. Market surprises, both positive and negative, are directly linked to specific domestic or international economic, political or financial market news. To study investors' reaction to surprises, we identify 28 political and economic events from 1997 to 2004 that had a significant impact on the Turkish stock market either positively (14 events) or negatively (14 events). We then follow a procedure proposed by Brown et al. (1988) and calculate cumulative abnormal returns (CARs) during a 30-day window after each event to empirically test whether investor reaction in Turkey is consistent with either the OH or UIH. Our empirical results show that: a) volatility of stock returns in Turkey increases following the arrival of unexpected information, b) there is an upward corrective price movement in response to both favorable and unfavorable surprises, and c) the reaction of investors to increased volatility is consistent with the predictions of the UIH. The implication of these findings is that stock prices are not initially biased by either excessive optimism in the case of good news or excessive pessimism in the case of bad news as predicted by the OH. Therefore, trading rules such as a contrarian strategy will not generate abnormal returns in the Turkish equity market.

This study investigates the dynamics of the reaction of investors to the arrival of unexpected economic and political surprises in Turkey from 1997 to 2004. Daily stock returns of the two major Turkish stock market indices, the ISE-100 and the ISE-All Share Index, are used to test two competing hypotheses concerning the reaction of investors to the arrival of unexpected macroeconomic information when security prices do not adjust instantaneously: the Overreaction Hypothesis (OH) and the Uncertain Information Hypothesis (UIH). The empirical results indicate that there is no statistical support of significant price reversals following the arrival of unexpected information in the Turkish equity market, as predicted by the OH. However, there is strong statistical evidence of a corrective process of significantly positive cumulative abnormal returns following the arrival of both favorable and unfavorable information, an outcome consistent with the prediction of the UIH regarding investor behavior. These empirical findings suggest that investors systematically set security prices below their fundamental values in response to unexpected political and economic information. Such behavior is rational according to the UIH, since the arrival of unexpected information (whether favorable or unfavorable) makes the equity market a more risky environment. Clearly, in an equity market like Turkey with a long history of significant monetary, political, currency and economic uncertainties, investors are rationally more cautious and risk-averse, and therefore they incorporate such risk into asset pricing in response to new information. An important implication of this research is that stock prices are set efficiently in Turkey, and trading rules such as short-term contrarian strategies will not generate any abnormal market returns.