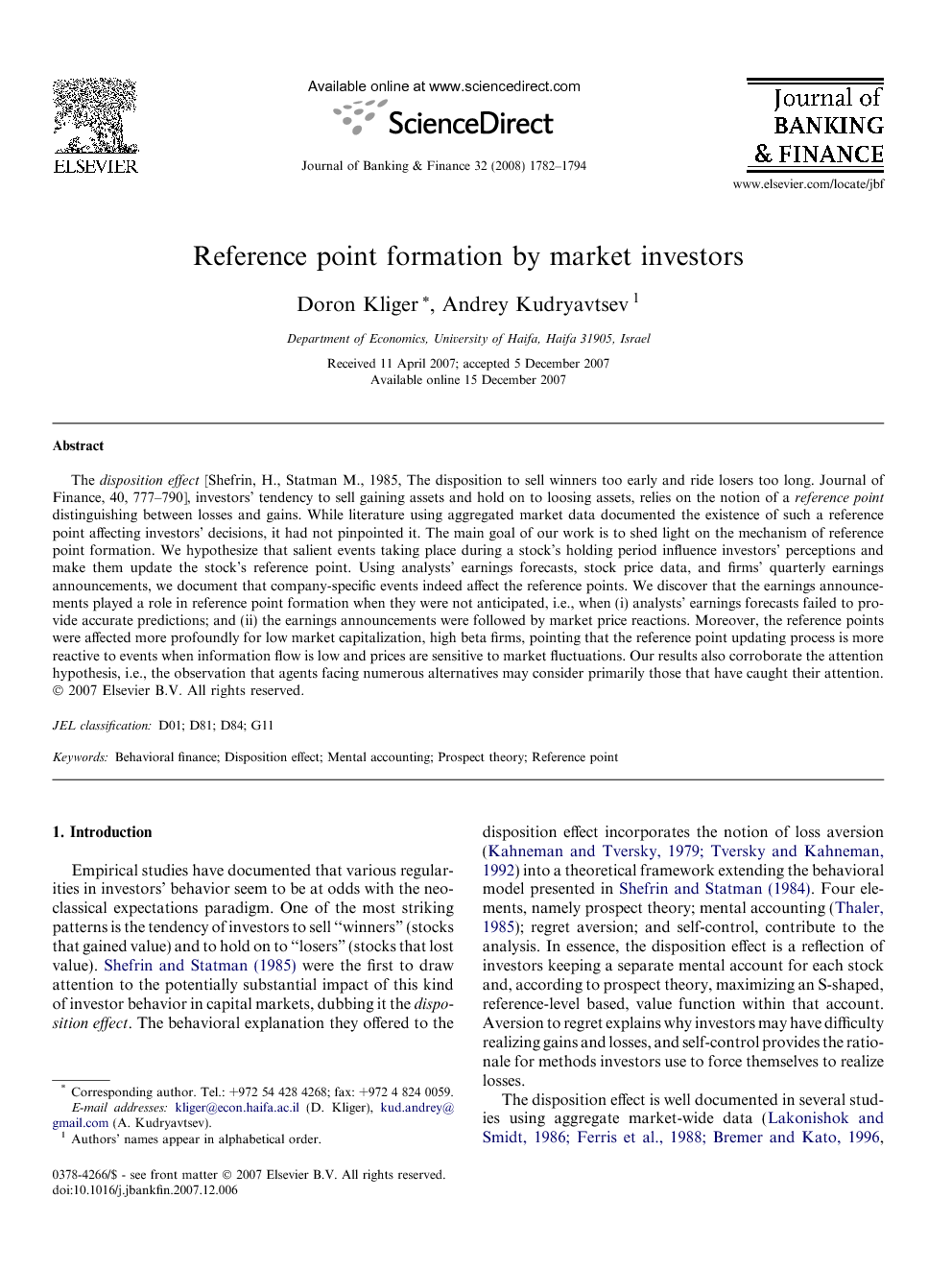 The disposition effect [Shefrin, H., Statman M., 1985, The disposition to sell winners too early and ride losers too long. Journal of Finance, 40, 777–790], investors’ tendency to sell gaining assets and hold on to loosing assets, relies on the notion of a reference point distinguishing between losses and gains. While literature using aggregated market data documented the existence of such a reference point affecting investors’ decisions, it had not pinpointed it. The main goal of our work is to shed light on the mechanism of reference point formation. We hypothesize that salient events taking place during a stock’s holding period influence investors’ perceptions and make them update the stock’s reference point. Using analysts’ earnings forecasts, stock price data, and firms’ quarterly earnings announcements, we document that company-specific events indeed affect the reference points. We discover that the earnings announcements played a role in reference point formation when they were not anticipated, i.e., when (i) analysts’ earnings forecasts failed to provide accurate predictions; and (ii) the earnings announcements were followed by market price reactions. Moreover, the reference points were affected more profoundly for low market capitalization, high beta firms, pointing that the reference point updating process is more reactive to events when information flow is low and prices are sensitive to market fluctuations. Our results also corroborate the attention hypothesis, i.e., the observation that agents facing numerous alternatives may consider primarily those that have caught their attention.

Empirical studies have documented that various regularities in investors’ behavior seem to be at odds with the neoclassical expectations paradigm. One of the most striking patterns is the tendency of investors to sell “winners” (stocks that gained value) and to hold on to “losers” (stocks that lost value). Shefrin and Statman (1985) were the first to draw attention to the potentially substantial impact of this kind of investor behavior in capital markets, dubbing it the disposition effect. The behavioral explanation they offered to the disposition effect incorporates the notion of loss aversion ( Kahneman and Tversky, 1979 and Tversky and Kahneman, 1992) into a theoretical framework extending the behavioral model presented in Shefrin and Statman (1984). Four elements, namely prospect theory; mental accounting (Thaler, 1985); regret aversion; and self-control, contribute to the analysis. In essence, the disposition effect is a reflection of investors keeping a separate mental account for each stock and, according to prospect theory, maximizing an S-shaped, reference-level based, value function within that account. Aversion to regret explains why investors may have difficulty realizing gains and losses, and self-control provides the rationale for methods investors use to force themselves to realize losses. The disposition effect is well documented in several studies using aggregate market-wide data (Lakonishok and Smidt, 1986, Ferris et al., 1988 and Bremer and Kato, 1996, to name but a few), data from individual investors’ accounts (e.g., Odean, 1998, Shapira and Venezia, 2001, Grinblatt and Keloharju, 2001 and Coval and Shumway, 2005), and also in studies using an experimental questionnaire design (Weber and Camerer, 1998 and Oehler et al., 2002). The literature discusses a number of profitable investment strategies, emanating from the disposition effect. For example, Jegadeesh and Titman (1993) find that strategies which involve purchasing stocks that have performed well and selling stocks that have performed poorly generate significant positive returns. Similarly, Odean (1998) argues that the winners that people sell subsequently outperform the losers they hold. The commonly practiced reference point distinguishes between winners and losers relatively to the asset’s original purchase price. In the present work, we argue that investors may modify their view on a financial asset upon the arrival of new information, such as firms’ earnings announcements. An earning announcement may make the investors acknowledge the asset’s return resulting from the arrival of the information embedded in it and, therefore, reset the mental account they allotted to investing in the firm’s stocks. Subsequently, they may evaluate the asset relatively to the market price established after the incorporation of the information update. To elaborate, when a firm reveals new information by announcing an unexpected earnings figure, some market participants may perceive the firm’s stocks as having new, altered, attributes and, therefore, evaluate their holding position in the stocks relatively to the performance from that point on. It is worthwhile to note here that two types of testable hypotheses emanate from the above. First, unexpected earnings announcements should be followed by investors updating the reference points of their investments, and second, such reference point updates should not be detected when the announced earning figures were expected by the investors. We investigate the latter by employing two proxies for investors’ expectations with respect to the firms’ earnings: (i) analysts’ consensus earnings per share (EPS) figures, and (ii) the stock price reactions to the firms’ earnings announcements. The main goal of our work is to contribute to the literature shedding light on the formation of investors’ reference points using aggregate market-wide data. In aggregate data analysis, where purchase prices are neither common, nor easily identified, historical stock prices, somewhat arbitrarily lagged, are often applied. Our hypothesis that salient firm-specific events may influence investors’ attitudes and modify the reference points may be used to sharpen the reference points’ identification. In this context, we empirically test the hypothesis that such events drive the investors to update their view on firms’ stocks. As an example of firm-specific events, we employ firms’ earnings announcements. For a large sample of stocks, we use market prices and trading volumes to check if the disposition effect is exhibited with respect to the stocks’ prices at the firms’ earnings announcements. In other words, we empirically test the hypothesis that investors compare (in their “mental accounts”) contemporaneous stock prices with the prices established at the market as a reaction to the underlying firms’ earnings announcements. Our approach for analyzing the disposition effect employs the trading volume at the crossing of the hypothesized reference level. This approach is fitted for revealing the investors’ attitude to a specific price level. We conjecture that if investors update the stock’s reference point when the issuing firm announces its earnings, then the tendency of selling winning stocks and holding losing stocks should be reflected in a higher trading volume at upward crossings of the newly established price than at downward crossings of this price. Furthermore, we hypothesize that such a trading-volume differential should not be detected in cases where the announced earning figure was expected by the investors. In support of our research hypothesis, we find empirical evidence that unexpected company-specific events influence investors’ perceptions, causing them to record the post-event stock prices in their mental accounts. Our results also corroborate the attention hypothesis (cf. Odean, 1999 and Barber and Odean, 2007), i.e., the observation that agents facing numerous alternatives may consider primarily those that have caught their attention.2 Specifically, we find support to the hypothesis that investors’ attention to the stocks is amplified at the first post-announcement price crossing. Nevertheless, the reference point updating hypothesis is established also after controlling for the sequence of the stock price crossings. Importantly, we discover that firm-specific events play a role in cases where they were not anticipated, i.e., when (i) analysts’ earnings forecasts failed to provide accurate predictions; and (ii) earnings announcements were followed by stock price reactions. These results suggest that investors update the stocks’ reference points after observing events which they perceive to be surprising. The paper is structured as follows. In Section 2, we review the existing literature. Sections 3, 4 and 5 describe the dataset, define the hypotheses, perform the empirical tests, and analyze the results. Section 6 summarizes our findings.

The psychological concept of a reference point is well-known and widely discussed in the economic literature. Yet, the mechanism of reference point formation is not thoroughly explored. Numerous empirical research applications make a simplifying assumption, taking assets’ purchase prices as a reference point. In light of the aforesaid, the main goal of our research is to test the hypothesis that company-specific events drive investors to update their reference level, consequently influencing their behavior. As an example of “company-specific events” we use quarterly earnings announcements, taking the stock price fixed at the day following the “event day” as a benchmark, that is, a potential reference point. Our major finding is that investors update the reference level assigned to stocks subsequently to news regarding their values. Moreover, this evidence is significant after the adjustment of the statistics to an estimated return-related volume relation. These findings suggest that investors indeed update their perceptions following company-specific events, and use the new market price as a reference point. We are able to show that our findings are robust to the specification of the expectations proxy: both the “analysts’ proxy” and the “market proxy” provide similar results. Importantly, only the events that are perceived as surprises lead to the empirical trading volume pattern defined in the hypotheses. Thus, our results do not stem from investors’ tendency to overpredict reversals. Moreover, we detect that the reference points are affected more profoundly for low market capitalization and high beta firms, pointing that the reference point updating process is more reactive to events when information flow is low and prices are sensitive to market fluctuations. Our results also corroborate the attention hypothesis, i.e., the observation that agents facing numerous alternatives may consider primarily those that have caught their attention. Our research yields a series of noteworthy results. First, we obtain additional evidence for the existence of the disposition effect as a psychological bias characterizing investors’ behavior. This is a valuable result, as we manage to detect the disposition effect, employing new empirical tests. Second, we document the influence of the surprise component of company-specific events, as defined by the analysts’ and the market proxy, on the salience of these events from the investors’ viewpoint. Finally and mostly important, our research provides valuable information concerning the process of reference point formation. The significant evidence we get for the disposition effect allows us to conclude that investors indeed compare in their “mental accounts” the current stock price with the price level fixed at the day following the firm’s earnings announcement. It means that the latter becomes a relevant reference point for the investors. Investors are not static in their perceptions and update their reference levels following different company-specific events. While firms’ earnings announcements represent an obvious and generally used example of such events, our results suggest that other company-specific events may also drive the investors to change their reference point. A possible direction for further research may include testing and comparing the degree of influence of different company-specific events on the reference point formation.