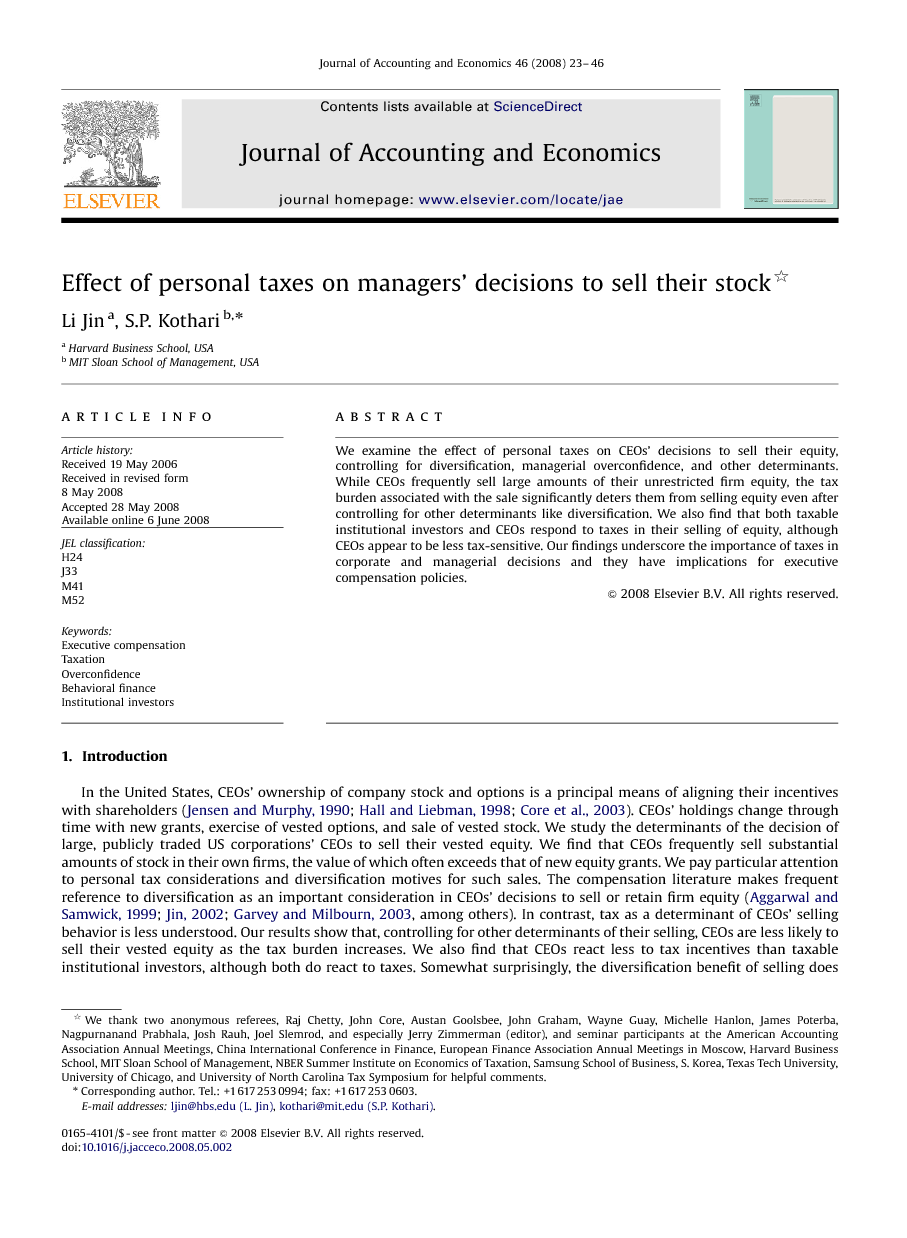 We examine the effect of personal taxes on CEOs’ decisions to sell their equity, controlling for diversification, managerial overconfidence, and other determinants. While CEOs frequently sell large amounts of their unrestricted firm equity, the tax burden associated with the sale significantly deters them from selling equity even after controlling for other determinants like diversification. We also find that both taxable institutional investors and CEOs respond to taxes in their selling of equity, although CEOs appear to be less tax-sensitive. Our findings underscore the importance of taxes in corporate and managerial decisions and they have implications for executive compensation policies.

In the United States, CEOs’ ownership of company stock and options is a principal means of aligning their incentives with shareholders (Jensen and Murphy, 1990; Hall and Liebman, 1998; Core et al., 2003). CEOs’ holdings change through time with new grants, exercise of vested options, and sale of vested stock. We study the determinants of the decision of large, publicly traded US corporations’ CEOs to sell their vested equity. We find that CEOs frequently sell substantial amounts of stock in their own firms, the value of which often exceeds that of new equity grants. We pay particular attention to personal tax considerations and diversification motives for such sales. The compensation literature makes frequent reference to diversification as an important consideration in CEOs’ decisions to sell or retain firm equity (Aggarwal and Samwick, 1999; Jin, 2002; Garvey and Milbourn, 2003, among others). In contrast, tax as a determinant of CEOs’ selling behavior is less understood. Our results show that, controlling for other determinants of their selling, CEOs are less likely to sell their vested equity as the tax burden increases. We also find that CEOs react less to tax incentives than taxable institutional investors, although both do react to taxes. Somewhat surprisingly, the diversification benefit of selling does not appear to overcome the disincentive to sell and incur an immediate tax liability. Other determinants affect CEOs’ selling decisions largely as predicted in the literature. Understanding CEOs’ equity-selling patterns is important for several reasons. First, how CEOs undo incentives from equity compensation informs the design of equity compensation contracts in more effectively aligning incentives. Second, it indirectly provides evidence on how corporations (managers) react to tax incentives. Existing literature suggests corporations rationally respond to tax incentives (see, for example, Auerbach, 2002; Gordon and Hines, 2002; Graham and John, 2003), and that firms trade off taxes and other considerations such as financial accounting costs and contracting costs (see, for example, Shackelford et al., 2001; Erickson et al., 2004). To better understand how corporations respond to incentives, it is helpful to know whether corporate decision makers respond to tax incentives and trade off taxes and other considerations in their personal portfolio decisions. Third, the existing literature on individual investors documents behavioral biases such as the “disposition effect” (see Odean, 1998), whereby investors sell winning investments too soon and thus forego tax deferral, but hold on to losing investments too long. CEOs as a group of individuals are well-advised and sophisticated. They also have large stakes affected by taxes, and therefore might care about tax optimization more than the average investor. Our study examines whether CEOs are tax savvy. In Section 2, we review the literature on the determinants of equity selling by CEOs. We describe our empirical methodology, and the data and measurement of all variables used in the empirical analysis, in Section 3. Section 4 provides descriptive evidence of CEOs’ selling behavior as well as evidence of the determinants of the selling of their equity. Section 5 concludes.

CEOs hold large amounts of firm equity, and such holdings change significantly through time with new grants, exercise of vested options, and sale of vested stocks. We analyze CEOs’ selling of equity. We find that CEOs frequently sell large amounts of their vested equity, which runs counter to the conventional wisdom that CEOs avoid selling firm equity for fear of an adverse stock market reaction. We also examine the determinants of CEOs’ stock selling behavior. In particular, we focus on assessing the relative importance of taxes, under-diversification, and managerial behavioral bias in a CEO's decision to sell his equity in a given year. CEO ownership of vested firm equity beyond the levels justified by efficient portfolio considerations (i.e., diversification) is often attributed to managerial overconfidence (see, for example, Malmendier and Tate, 2005). However, an immediate tax liability associated with selling equity that has appreciated might also discourage managers from selling firm equity. In contrast, high under-diversification cost would motivate the CEO to sell equity. Our analysis suggests that taxes swamp overconfidence as a factor influencing CEOs’ decision to sell their vested equity, subject to the caveat that our measure of under-diversification is not very precise. Taxes also appear to be a stronger motivation than the under-diversification cost in the selling decision. The importance of taxes in a CEO's decision to sell firm equity remains statistically and economically significant even after controlling for other determinants of the CEO's stock selling behavior.19 We also compare a CEO's selling decision with that of a tax-sensitive institutional investor, who also faces an immediate tax liability on realized capital gains upon selling a stock. We find that both the CEO and the tax-sensitive institution respond to tax incentives. However, the CEO's response is weaker than that of the institutional investor. Taken together, our results suggest that in their selling decisions, CEOs exhibit a first-order influence of tax considerations, but CEOs might still exhibit some behavioral bias similar to a disposition effect, compared to fully rational financial investors. Notwithstanding the a priori lesser importance of taxes compared to under-diversification as explained in Section 3, our results suggest that taxes affect CEOs’ selling decision as much, if not more, than CEO under-diversification. The evidence suggests either (i) managers are excessively concerned about the immediate tax consequence of selling equity, and/or (ii) they have lower risk-aversion than indicated in the extant literature and thus do not value diversification nearly as much as existing studies might suggest, and/or (iii) labor contracts require CEOs to hold stock for incentive reasons and that these incentives are highly correlated with the tax burden (which seems implausible to us); or (iv) instead of selling equity to achieve better diversification, those CEOs facing the highest under-diversification costs privately hedge their exposure through capital market transactions, which achieves diversification without sacrificing the tax advantage of holding vested equity. We do not discriminate among these alternative explanations, but leave it for future research. Our findings have implications for corporate compensation policies as they relate to CEOs’ incentive level, and firms’ investment and financing policies. Specifically, (i) CEOs with tax overhang equity might have an under-diversified equity portfolio because these CEOs are less willing to sell vested equities. These firms thus might want to tailor the compensation package to avoid excessive equity incentive by giving more cash (bonus) instead of new grants of stock and options (see Core and Guay, 1999); (ii) unless a firm adjusts its compensation policy, the excessive incentive from tax overhang might distort the firm's investment and financing policies; and (iii) CEOs are responsive to tax considerations and actively trade-off tax and other considerations in their personal portfolio decisions. We thus have reason to believe that they might exhibit similar behavior in their corporate decision making.