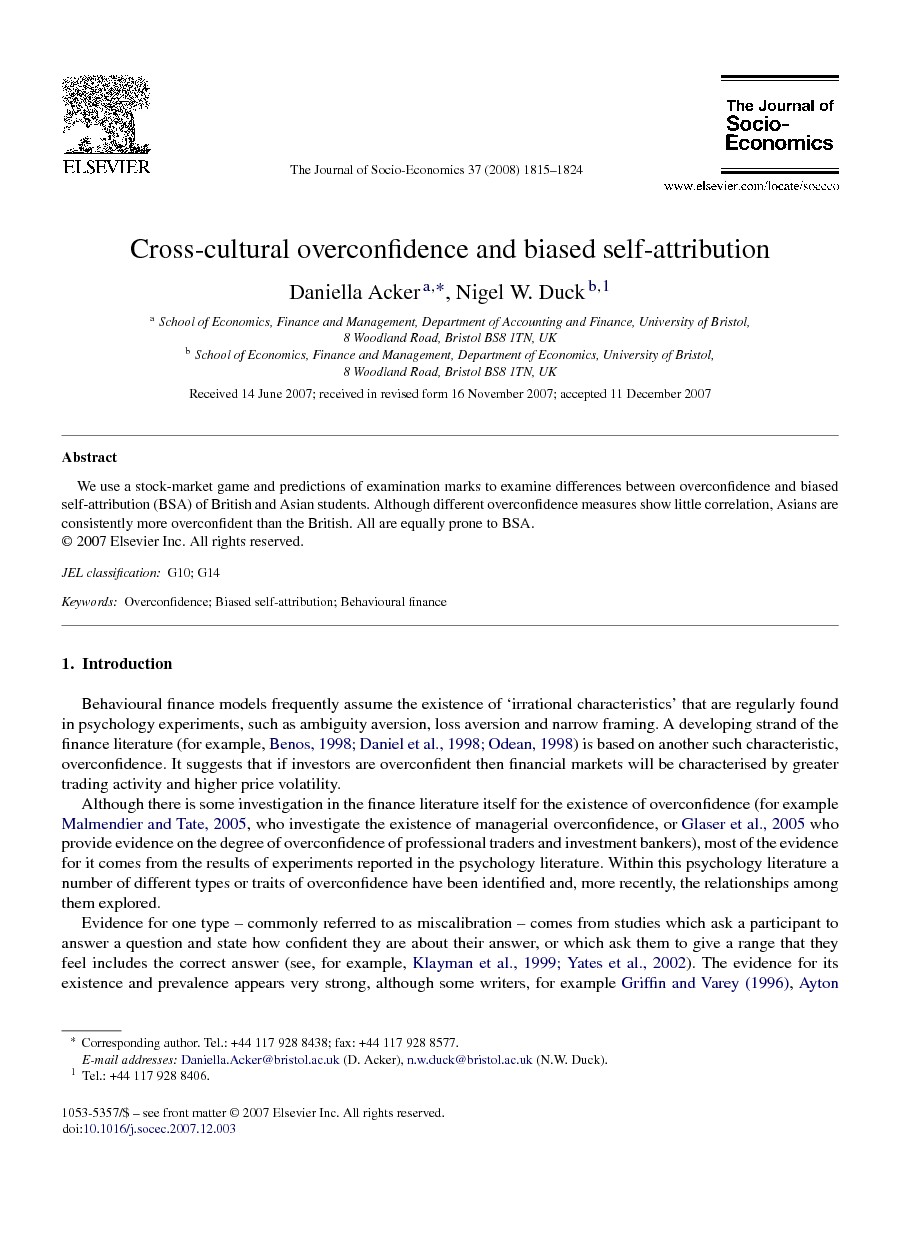 We use a stock-market game and predictions of examination marks to examine differences between overconfidence and biased self-attribution (BSA) of British and Asian students. Although different overconfidence measures show little correlation, Asians are consistently more overconfident than the British. All are equally prone to BSA.

Behavioural finance models are increasingly based on the assumption that financial decision makers have irrational characteristics. We have presented evidence on one of these broad characteristics—overconfidence. We have distinguished between two types of overconfidence, namely stand-alone and referential overconfidence. Our evidence comes from the responses of students to a multi-period stock-market game. Our principal findings are these. First, our results strongly confirm the finding of other studies mentioned in Section 1 concerning the existence of overconfidence: we find strong evidence of both stand-alone and referential overconfidence. But we also find evidence to support the view expressed in Glaser et al. (2005), quoted earlier: the different measures of overconfidence do not appear to be correlated. This finding confirms the argument of Glaser and Weber (2007), that it may be misleading for models of financial behaviour to use evidence of one type of overconfidence to justify the existence of another. Our data allow us to test for stability in participants’ overconfidence: our results suggest that for the majority of participants their levels of overconfidence are stable, although there is a sizeable minority whose confidence levels appear to vary over time. We also find significant differences between participants’ levels of overconfidence. In particular, we find strong evidence for both measures that Asians are more overconfident than British participants. Our tests on biased self-attribution suggest that the increased confidence of the Asians is not because of inflated views of their own abilities, since there is no difference between the BSA characteristics of the British and the Asians. One possibility is that Asian overconfidence arises from over-optimism and/or underweighting of downside risk. As mentioned in Section 1, the finance literature suggests that where participants are overconfident financial markets are likely to have higher price volatility and trading activity. So, whatever the reason for it, if our finding that Asians have a greater tendency to overconfidence is correct, then, ceteris paribus, Asian financial markets are more likely to exhibit price volatility and high trading activity.