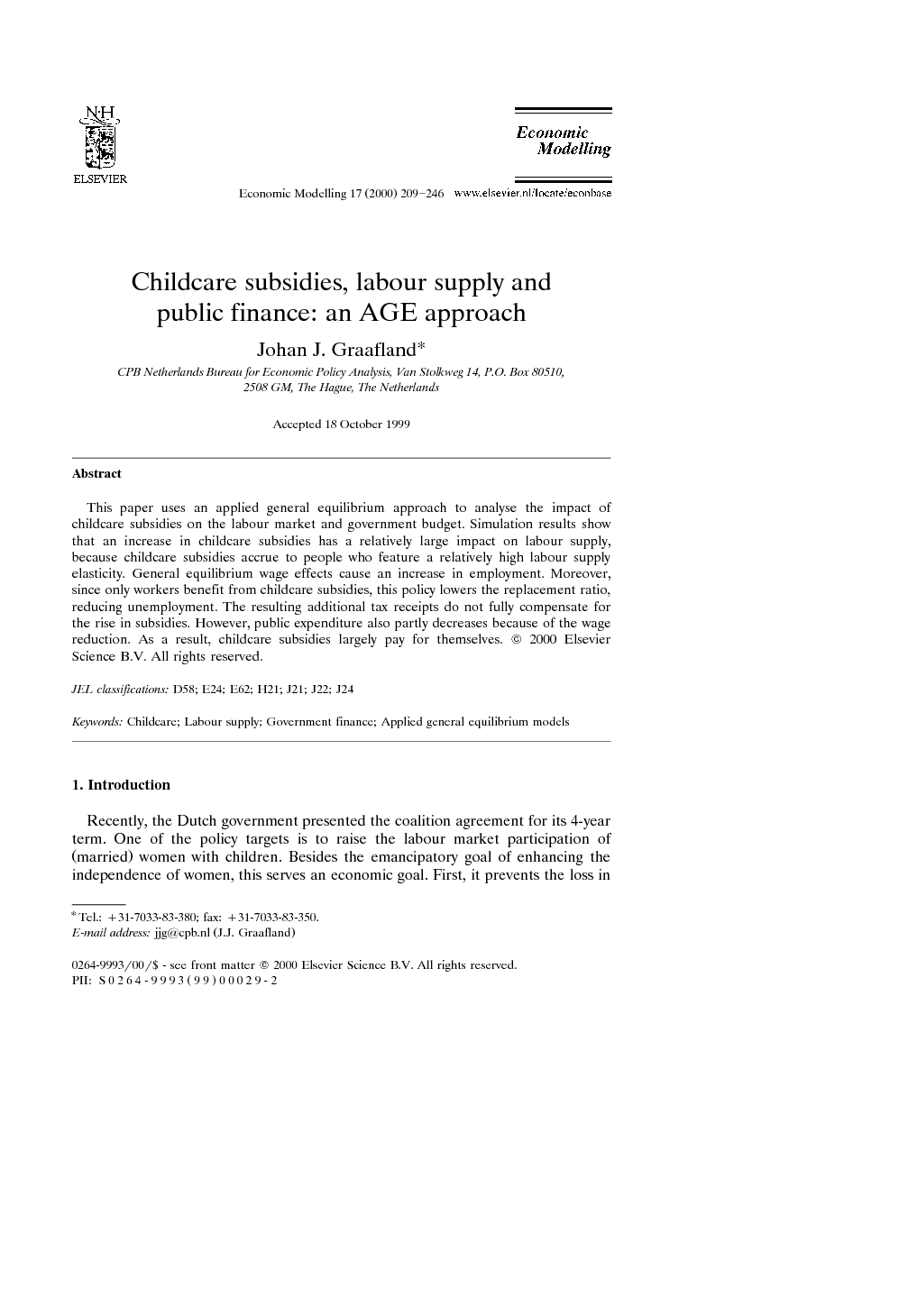 Recently, the Dutch government presented the coalition agreement for its 4-year term. One of the policy targets is to raise the labour market participation of (married) women with children. Besides the emancipatory goal of enhancing the independence of women, this serves an economic goal. First, it prevents the loss in human capital caused by the (temporary) withdrawing of women from the labour market who have young children. Second, it strengthens the financial base of social security in the future in light of the ageing of the population in the next decennia. In order to stimulate labour participation by (married) women, the government intends to double the public subsidies on childcare costs. The extra subsidy is partly spent on enlarging the number of places that are subsidised by local governments, partly on subsidising firms that arrange childcare places for their employees, and partly on raising the deductibility of childcare costs of private places. This three-sided subsidy policy reflects the opinion of the Dutch government that the costs of childcare should be shared by the government, employers and parents. This paper investigates the effectiveness of various forms of subsidies on childcare costs in raising labour market participation of women with children. Although most micro-econometric research on this subject indicates that subsidising childcare does increase the labour supply of mothers, it provides insufficient evidence on the aggregate effects. Rosen (1996) argues that subsidising childcare may just provoke substitution from household and informal activities to formal activities without raising the total level of activity in the economy. The policy's only effect would then be that it monetises the care for people: Instead of taking care of their own relatives, some women will look after the children of other women, who take care of the parents of those who are looking after the children. In order to analyse macro-economic consequences of subsidising childcare, CPBs applied general equilibrium model MIMIC is used. This model is particularly suitable, because it contains a highly disaggregated household model describing labour supply of households of, among others, couples with children and lone parents. Moreover, and more important, MIMIC not only describes the partial effect of childcare subsidies on labour supply, but also equilibrium effects stemming from the impact on human capital, value added, employment, wage and price formation and the informal economy, which all influence the net effect of childcare subsidies on government finance. The contents of this paper are as follows. First we highlight several aspects of the Dutch childcare market, like the capacity of subsidised childcare places and the cost involved in hiring a childcare place. Section 3 gives a detailed description of those parts of MIMIC that are important for the analysis of the effects of childcare subsidies. In particular, this section presents a model of the childcare market (including informal childcare), which has been included in the MIMIC model for the purpose of this paper. Section 4 presents the simulation results for several types of policies. Section 5 investigates the robustness of the simulation outcomes by presenting sensitivity analysis with respect to those parameters that lack a substantial empirical base. Section 6 discusses our results in light of some other research on the impact of childcare subsidies on labour supply. The main conclusions are summarised in Section 7.

This paper analyses the impact of childcare subsidies on labour supply and employment in the Netherlands. For this purpose, we use the applied general equilibrium model of the CPB, called MIMIC. The advantage of using MIMIC is that it contains a highly disaggregated household model describing the interaction between childcare and labour supply. A model of the childcare market is included, that describes the current situation of the Dutch childcare market, including the quantity constraints that hold for subsidised childcare places. Also the role of informal childcare is taken into account. The general equilibrium context of MIMIC further enables us to analyse the impact of childcare subsidies on wage formation and unemployment and their impact on public receipts and expenditure. The parameters of the model are derived from the literature on Dutch econometric research. For those parameters which lack a substantial empirical base, sensitivity analysis is performed. In the paper we analyse several types of policies of increasing government subsidies on childcare costs. The simulation results show that, at a given budgetary impulse, in all cases an increase in childcare subsidies is more effective in stimulating labour supply than a general tax reduction. An increase in childcare subsidy not only reduces the wedge for partners with children, who feature the highest wage elasticity of labour supply, but simultaneously reduces the marginal wedge of breadwinners. Besides stimulating labour supply, a rise in childcare subsidies has several positive side-effects. First, it both lowers the replacement ratio and the average wedge and therefore has a negative impact on wages. Second, it improves human capital formation by partners and raises labour productivity. The macro-economic revenues from the increase in labour supply, employment and human capital and the reduction in wages are so large, that ex post a rise in childcare subsidies does not increase the government deficit. Although the rise in tax receipts is insufficient to finance the additional childcare subsidies, the wage reduction caused by this policy also reduces government expenditure by lowering the public wage sum and government transfers. Comparing various alternatives of raising subsidies on childcare, we find that a rise in the number of subsidised places is less effective in stimulating labour supply than a decrease in the maximal or marginal parental fee per subsidised place. The first type of measure generates larger dead-weight losses because of higher substitution from informal and unsubsidised places to subsidised places. This tempers the decline in the average childcare costs and slows down the increase in labour supply. A second explanation is that a decrease in the maximal or marginal parental fee per childcare place strongly reduces the marginal wedge caused by the income dependence of the parental fee, whereas extending the number of subsidised places hardly affects the marginal wedge. The latter mechanism also explains why the effectiveness of a lower parental fee diminishes if it is concentrated at low income families. For some partners this makes it more profitable to change from a large part-time job to a smaller part-time job, because the parental fee of the latter has fallen (whereas that of the large part-time job has not been changed). In the sensitivity analysis six alternative model specifications are considered. A reduction in the wage elasticity of labour supply of partners from 1.0 to 0.5 reduces the impact of childcare subsidies on labour supply by approximately 40%. The simulation results hardly change if the wage elasticity of labour supply of partners per skill type is changed to 2.0 for unskilled, 1.25 for low-skilled and 0.5 for high-skilled labour. Childcare subsidies become 10 to 20% less effective if either the flexibility in the informal market increases or if the elasticity of substitution between informal and formal places falls. If the impact of formal childcare on wages of childcare personnel is doubled from 0.2 to 0.4, the labour supply effects hardly differ. Finally, the unemployment effects of childcare become less favourable if childcare costs are not shifted forward into higher wage costs in the wage bargaining model. In all cases, the relative effectiveness of the various types of increasing childcare subsidies does not change. However, in some cases we obtain an opposite impact on government consumption, indicating that childcare subsidies do not pay for themselves. Comparing our results with estimation results in the literature, we find that the reduced form elasticity of labour supply with respect to childcare costs in MIMIC is in line with estimates of other researchers. In the literature the value of this key parameter ranges from −0.02 to −0.72, whereas the MIMIC result equals −0.15. The human capital effect is, however, relatively low in MIMIC. In contrast, the budgetary effects are rather favourable in comparison to other studies. This is due to general equilibrium effects on wage formation and employment, which not only cause an increase in tax receipts, but also reduce government outlays like the public wage sum and transfers.