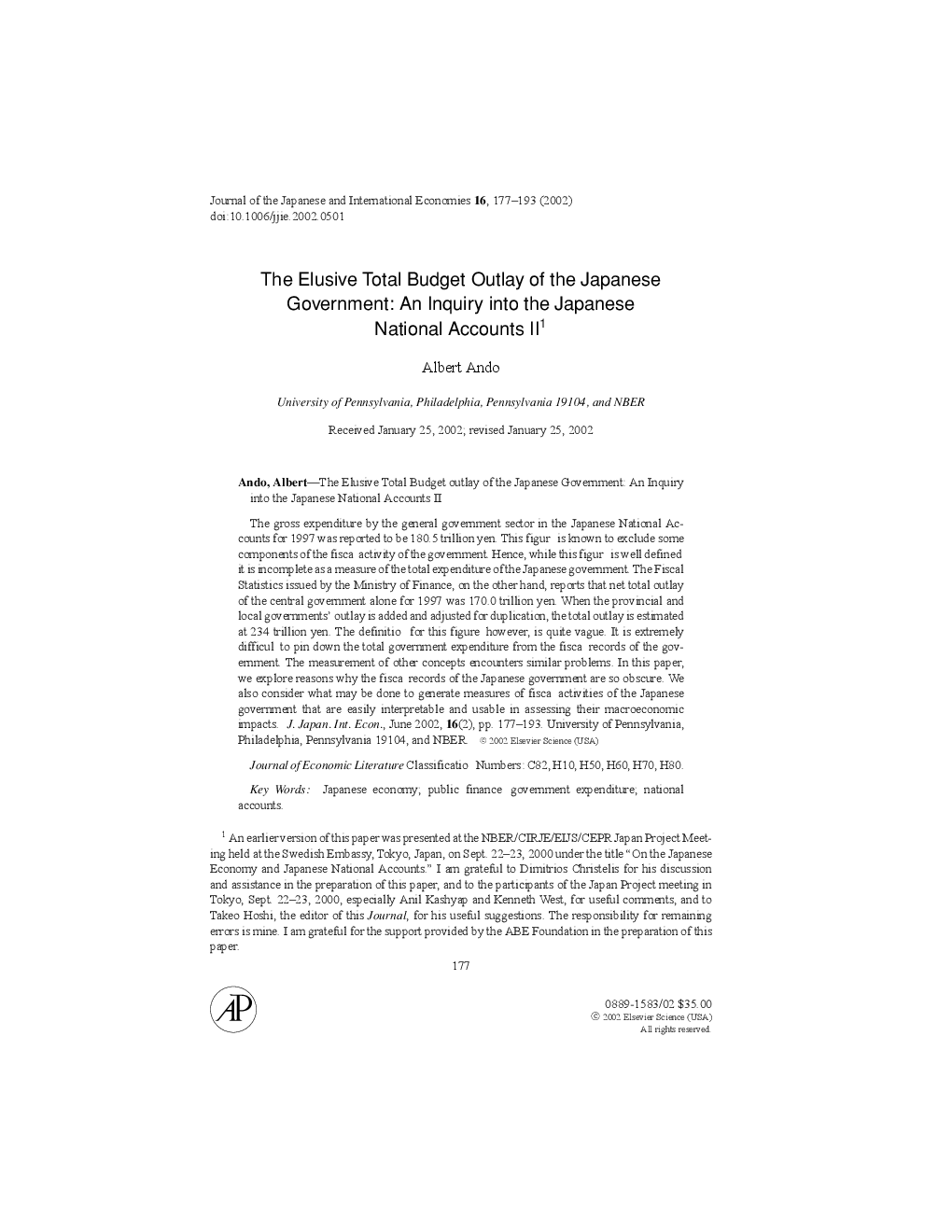 for this figure, however, is quite vague. It is extremely difficult to pin down the total government expenditure from the fiscal records of the government. The measurement of other concepts encounters similar problems. In this paper, we explore reasons why the fiscal records of the Japanese government are so obscure. We also consider what may be done to generate measures of fiscal activities of the Japanese government that are easily interpretable and usable in assessing their macroeconomic impacts. J. Japan. Int. Econ., June 2002, 16(2) pp. 177–193. University of Pennsylvania, Philadelphia, Pennsylvania 19104, and NBER. © 2002 Elsevier Science (USA).

In the companion paper (this issue), I have discussed statistical problems that are encountered in using the National Accounts data for analyzing the behavioral pattern of the household and corporate business sectors in Japan. The data problems for the private sectors of the National Accounts are serious enough, but they are well defined and specific within a reasonably well-structured system of accounts, so that each item can be dealt with individually. Thus, for example, when information on the amount of employee compensation in the nonfinancial corporate sector becomes available, this information can be incorporated into the existing system of accounts, and users can take advantage of this availability immediately. The problems in the data for the government sector are much more serious, because these problems originate from the complex and poorly designed administrative structure of the fiscal operations of the Japanese government. As a result, the attempt by those responsible for the National Accounts to reconstruct the fiscal records of the government into a comprehensive and comprehensible system of accounts in accordance with the SNA93 has been only partially successful. In this paper, we will focus on the records of government expenditures, leaving the revenue side of the accounts for another occasion. At the level of the central government, the government budget is divided into the general account (Ippan Kaikei), on the one hand, and a collection of 38 special accounts (Tokubetsu Kaikei) on the other. These accounts are supplemented by accounts for nine “government related institutions” and a large set of public enterprises. Government related institutions are public enterprises, wholly owned by the central government, whose budgets must be submitted to the Diet for approval. The distinction between these institutions and other public enterprises wholly owned by the government, such as the Japan Highway Authority (Nihon Doro Kodan) and the Petroleum Management Authority (Sekiyu Kodan), appears to be largely administrative and not important from an economic point of view. Other public enterprises may be more independent of the central government, and their activities may resemble those of private enterprises. They are nevertheless still subject to supervision and control by the government at critical points. In the introduction to the Fiscal Statistics (Ministry of Finance, 2000a), the presence of a large number of semi-independent accounts in the national budget is justified as follows:In principle, it is desirable that the fiscal records of the government should be structured as a single system, and all revenues and expenditures should be organized in a unified fashion. However, as the range of the nation’s finances becomes complex and multifaceted, in order to make the operation of fiscal activities clear, and to improve administrative efficiency, it becomes necessary to distinguish different types of accounts. Accordingly, the Lawon Fiscal Administration authorizes the government to establish Special Accounts when (1) the government undertakes a specific project, (2) the government needs to establish a special fund for some purpose, (3) when specific revenue is designated to be used for a specific expenditure