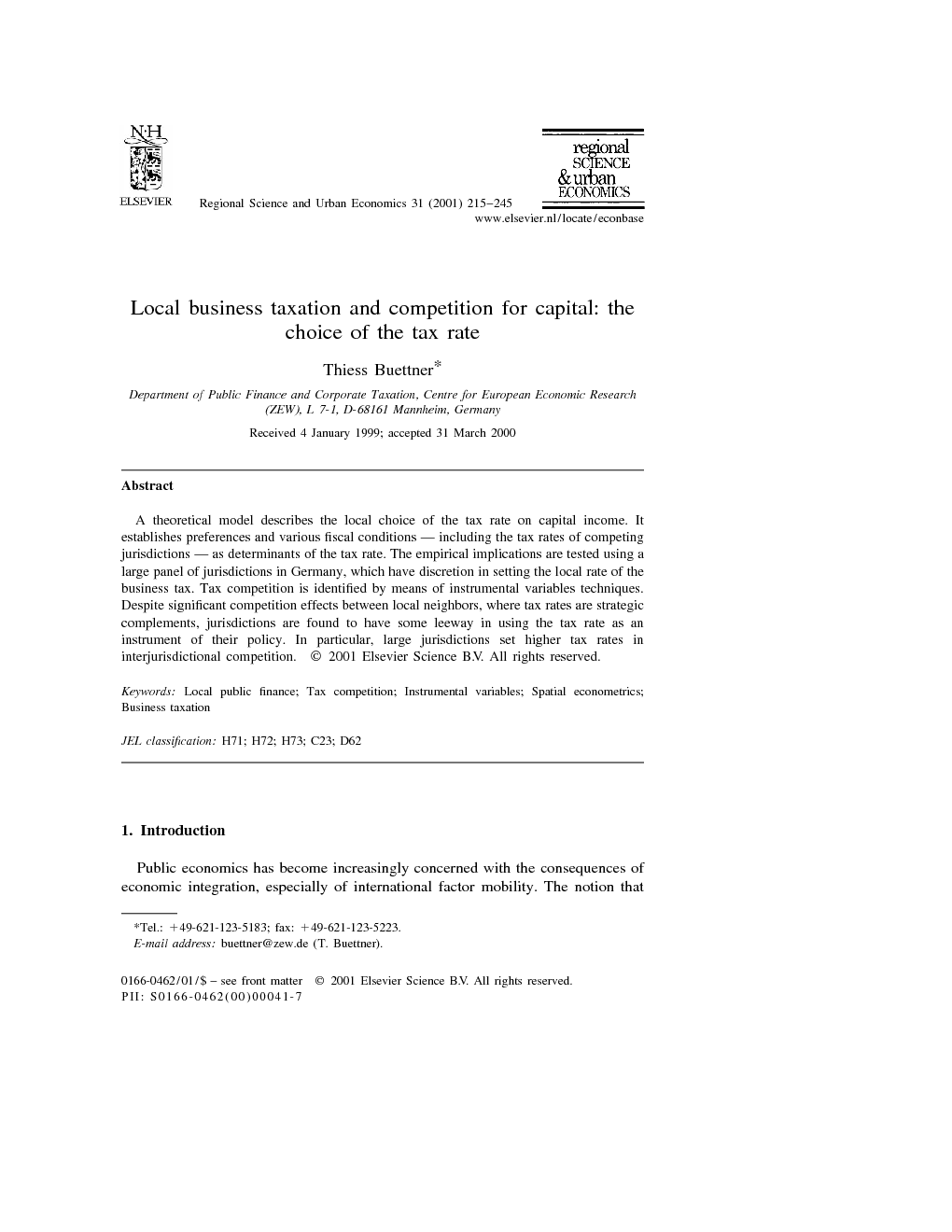 Public economics has become increasingly concerned with the consequences of economic integration, especially of international factor mobility. The notion that established systems of taxation face serious difficulties in capital income taxation has brought about a large literature on international tax competition. However, as compared to the theoretical and political significance of this issue the empirical literature is still on a small scale. Possibly, this is related to the difficulties of tracing back observed actions of economic agents to the national tax systems and in a more general perspective to the shape of the public sector as a whole. Given this background several researchers have found it helpful to skip the broad international perspective and to take a look at local issues. Some federal states, highly integrated, have substantial local autonomy in the public sector and offer rich observable experience with the consequences of economic integration. This article analyses local tax policy using a panel of more than 1000 jurisdictions in a major German state. The focus is on the local tax on business earnings and business property. An attractive feature of this case lies in its resemblance to the theoretical case of source-based capital taxation, which is important in the literature on tax competition. As the business tax constitutes the main local competence in tax policy in Germany, the set of tax instruments is restricted in such a way that governments use the distorting tax on the mobile factor, which is essential for many of the results of the tax competition literature (e.g. Wellisch, 2000). Therefore, this case allows to study the determinants of the local choice of the tax rate, and, in particular, to investigate to what extent local tax policy is involved in tax competition. The empirical analysis is based on a theoretical model of a council’s choice of the local tax rate. This model collects various important aspects from the literature in order to derive a testable set of predictions about the local tax policy. Taking into account the productivity effects of public spending as in Matsumoto (1998) tax rates of competing jurisdictions are shown to be interdependent. However, in view of large differences in terms of the population size of the local jurisdictions in Germany, the model takes account of asymmetries in tax competition following Bucovetsky (1991) and Wilson (1991). In addition, the objectives of the local councils are not assumed to be the same across jurisdictions, although, unlike Inman (1989) the focus is not on the impact of various interest groups on local policy, as a unanimous objective function of the local council is assumed. Moreover, predetermined and exogenous revenue components in the local budget, such as grants, are established as determinants of the choice of the tax rate. In the empirical investigation, observed tax rates are regressed on various local characteristics of potential influence according to the theoretical model. The tax policy of possibly competing jurisdictions is taken into account by employing observed tax rates in the nation as a whole as well as in the local neighborhood in the regression. Yet, in order to take account of the simultaneity of the observed taxing decisions predetermined or exogenous determinants of tax rates are used as instruments of neighbors’ tax policy by means of a spatial instrumental variables technique. Following Kelejian and Prucha (1998) the estimation also controls for additional spatial autocorrelation of residuals. The results confirm the existence of local tax competition, and thus support evidence by Ladd (1992), Besley and Case (1995), and Brett and Pinske (1997) for the US, as well as Seitz (1995) for Germany, and Ashworth and Heyndels (1997) for Belgium. However, the findings indicate that tax competition by no means deprives jurisdictions of all leeway in using the tax rate as an instrument of their policy. Large jurisdictions, in particular, are found to set higher tax rates. In view of the theoretical model, and given the set of control variables, this size differential is interpreted as indicating the market power of large jurisdictions (cf. Epple and Zelenitz, 1981;Hoyt, 1992). Furthermore, the endowment with fiscal revenues as well as spending mandates are reflected in the taxing decisions. Section 2 lays out a theoretical model establishing testable predictions about the local tax policy. The empirical investigation in Section 3 starts with some basic institutional facts, develops an estimation strategy and gives a description of the dataset before presenting the results. Appendix A and Appendix B contain the derivation of the comparative static properties of the theoretical model, as well as a detailed description of the sources and definitions of the data.