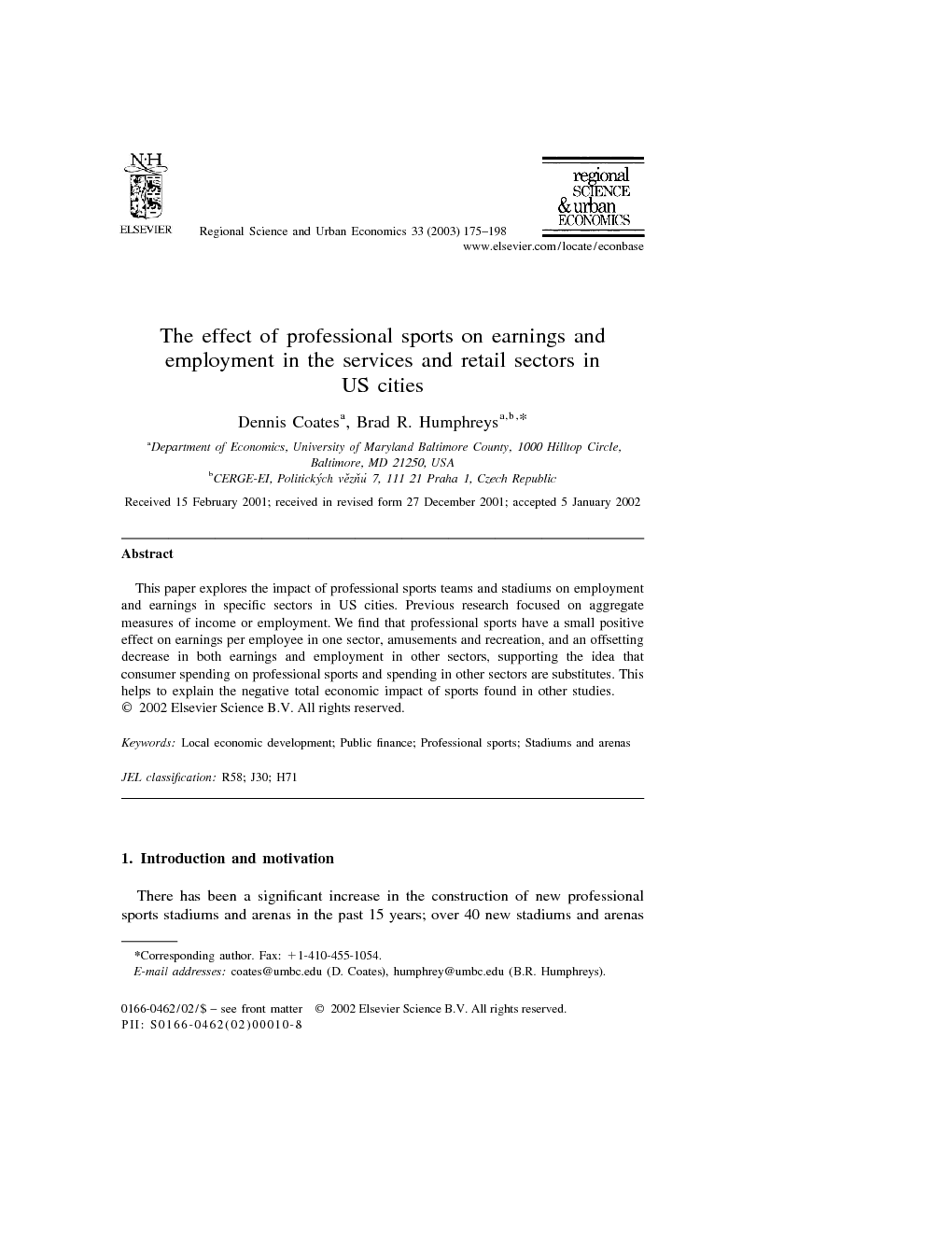 There has been a significant increase in the construction of new professional sports stadiums and arenas in the past 15 years; over 40 new stadiums and arenas have been built for professional football, basketball and baseball teams since the mid-1980s. In some cases, the construction takes place prior to, or concurrent with, a new or relocated franchise moving to the city. This trend shows no sign of slowing. Five new arenas for professional basketball and a new professional baseball stadium opened in 1999, two new professional baseball stadiums opened in 2000 and four additional new stadiums are currently under construction. Most professional sports construction projects receive substantial government subsidies. Potential increases in employment, income and other benefits often are used to justify these subsidies and prospective ‘economic impact’ studies, commissioned and paid for by proponents of new sports construction projects, claim to quantify these economic benefits. In some cases, prospective estimates of jobs created by these projects run into the thousands.1 These impact studies often assume that spending at restaurants, bars, hotels, and motels will rise as a consequence of building a stadium and attracting a professional sports team. Opponents of stadium and arena construction counter that the spending and income generation effects of sports are quite limited. Spending on sports substitutes for spending on other types of entertainment, and on other goods and services more generally, so there is very little new income generated. Indeed, Coates and Humphreys, 1999 and Coates and Humphreys, 2001 provide evidence that professional sports actually reduces local incomes. Key to this argument is the extent to which spending on sports-related activities substitutes for spending on other goods and services. This paper addresses this substitution by focusing on the relationship between the sports environment and the employment and earnings of workers in those sectors of the economy most closely linked to the sports environment, eating and drinking establishments, hotels and other lodgings, and amusements and recreation, as well as the broader service and retail sectors. Specifically, if the pro-stadium/pro-sports argument is correct, then employment and earnings in each of these sectors should be higher with professional sports than without it. If the anti-stadium argument is correct then one might find decreases in earnings and employment at eating and drinking establishments and in hotels and other lodgings. The effect of sports on earnings and employment in amusements and other recreation is ambiguous, as professional sports is one component of this sector. We formulate econometric models of the determination of employment and earnings in specific economic sectors in Metropolitan Statistical Areas (MSAs). We estimate these models using employment and earnings data collected from the US Bureau of the Census’ Regional Economic Information System (REIS) and data reflecting the sports environment in these MSAs drawn from a wide variety of sources. In contrast to the results found in most prospective ‘economic impact’ studies, we find that although sports may increase wages within the Amusements and Recreation sector (SIC 79) by a small amount, they also reduce earnings in the Eating and Drinking Establishments sector (SIC 58) and employment in the larger Services and Retail Trade sectors. On balance the overall impact of sports on employment and earnings in MSAs is negative. Several previous studies found no evidence that professional sports teams, stadiums and arenas created jobs in MSAs, and this work is best seen as an extension of these studies. Baade and Sanderson (1997) reported four instances where the number of professional sports teams and new stadiums in a city were associated with an increase in the share of state employment in two sports-related industries (Amusement and Recreation, SIC 79, and Commercial Sports, SIC 794) located in cities in that state with professional sports teams and facilities; they also reported five instances where the number of professional sports teams and stadiums were associated with decreases in the employment share. For those instances where the effect was positive, the results reported by Baade and Sanderson suggest that the average increase across these two industries amounted to about 200 jobs. Baade (1996), using a similar approach, found no statistically significant effects of professional sports franchises, stadiums and arenas on employment shares for the same two industries. Rosentraub et al. (1994) analyzed Indianapolis’ sports-led economic development program which consisted of eight capital construction projects including a basketball arena and a football stadium. The program began in the 1970s and lasted for over 18 years. This study compared Indianapolis’ growth in employment to the growth in employment in other mid-western cities over the period 1977 to 1989. It concluded that the sports-led economic development program had no impact on either employment or earnings relative to the experience of the other cities. Rosentraub (1997) drew similar conclusions regarding the impact of other professional sports construction projects on employment and earnings in MSAs. The next section of the paper describes the empirical model and the estimation scheme for the analysis. This is followed by a description of the data. Presentation and discussion of the results comes after the data description. The paper ends with a brief conclusion.

In this paper we have examined the impact of professional sports on employment and earnings in narrowly defined sectors of the economies of US cities. Our results suggest that professional sports has a small positive effect on earnings per employee in the Amusements and Recreation sector, but that this positive effect is offset by a decrease in both earnings and employment in other sectors of the economy. These results have several important implications. Firstly, these results call into question the validity of multipliers as a tool for assessing the overall impact of sports on the economy. The multiplier approach attempts to quantify indirect benefits flowing from professional sports by assuming that each dollar of direct spending on sports propagates through the economy and increases spending and income in other sectors. Our results suggest that the direct spending on sports does not lead to additional earnings in other sectors of the economy like restaurants, bars and hotels. Instead, spending on sports and spending in other related areas appear to be substitutes. Secondly, our results shed new light on the reason that professional sports reduce the level of income in cities. The negative effect of sports on earnings of employees of restaurants and bars, and on employment in Retail and Services supports the idea that sports reduce real per capita income in cities through both substitution in private spending and through the creation of new jobs which pay less than the average prevailing wage.