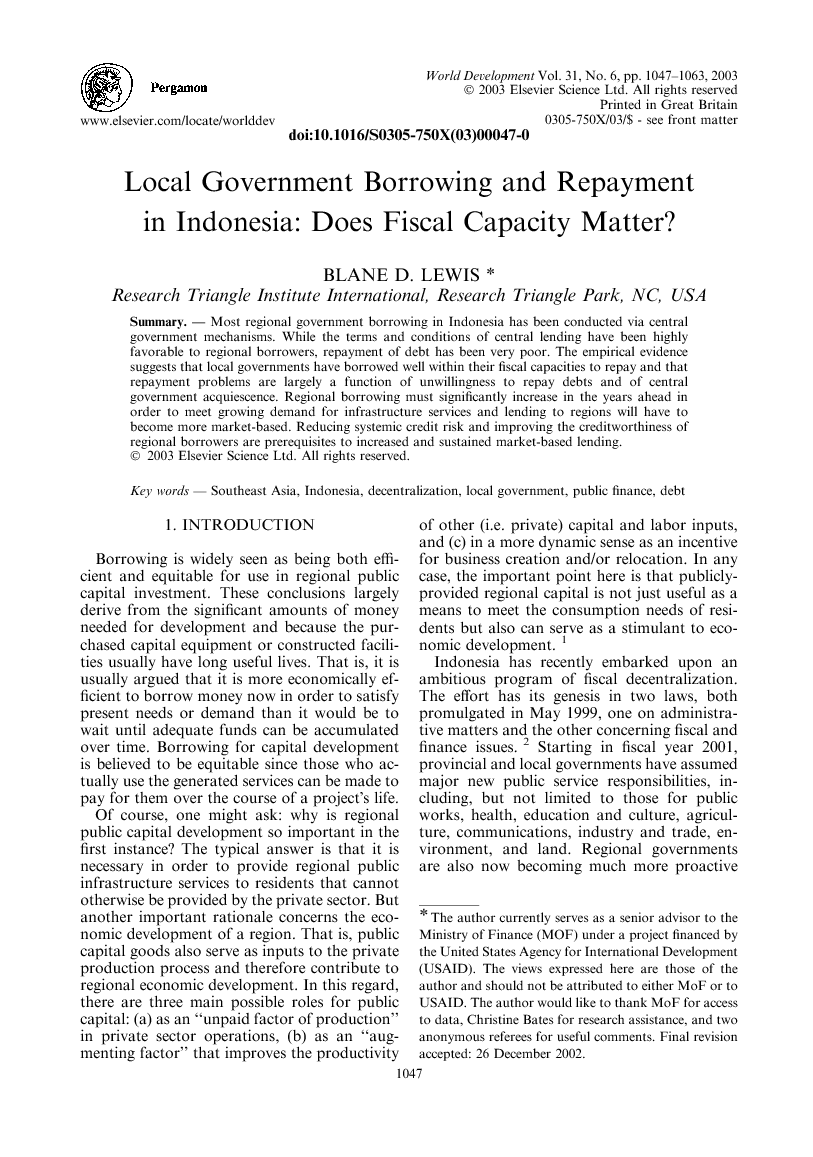 Most regional government borrowing in Indonesia has been conducted via central government mechanisms. While the terms and conditions of central lending have been highly favorable to regional borrowers, repayment of debt has been very poor. The empirical evidence suggests that local governments have borrowed well within their fiscal capacities to repay and that repayment problems are largely a function of unwillingness to repay debts and of central government acquiescence. Regional borrowing must significantly increase in the years ahead in order to meet growing demand for infrastructure services and lending to regions will have to become more market-based. Reducing systemic credit risk and improving the creditworthiness of regional borrowers are prerequisites to increased and sustained market-based lending.

Borrowing is widely seen as being both efficient and equitable for use in regional public capital investment. These conclusions largely derive from the significant amounts of money needed for development and because the purchased capital equipment or constructed facilities usually have long useful lives. That is, it is usually argued that it is more economically efficient to borrow money now in order to satisfy present needs or demand than it would be to wait until adequate funds can be accumulated over time. Borrowing for capital development is believed to be equitable since those who actually use the generated services can be made to pay for them over the course of a project’s life. Of course, one might ask: why is regional public capital development so important in the first instance? The typical answer is that it is necessary in order to provide regional public infrastructure services to residents that cannot otherwise be provided by the private sector. But another important rationale concerns the economic development of a region. That is, public capital goods also serve as inputs to the private production process and therefore contribute to regional economic development. In this regard, there are three main possible roles for public capital: (a) as an “unpaid factor of production” in private sector operations, (b) as an “augmenting factor” that improves the productivity of other (i.e. private) capital and labor inputs, and (c) in a more dynamic sense as an incentive for business creation and/or relocation. In any case, the important point here is that publicly-provided regional capital is not just useful as a means to meet the consumption needs of residents but also can serve as a stimulant to economic development.1 Indonesia has recently embarked upon an ambitious program of fiscal decentralization. The effort has its genesis in two laws, both promulgated in May 1999, one on administrative matters and the other concerning fiscal and finance issues.2 Starting in fiscal year 2001, provincial and local governments have assumed major new public service responsibilities, including, but not limited to those for public works, health, education and culture, agriculture, communications, industry and trade, environment, and land. Regional governments are also now becoming much more proactive regarding matters related to regional economic development. Among other things, responsibility for subnational public capital development in Indonesia now rests to a large extent with regional governments. This means that regional governments now have a greater role in setting capital development priorities and in designing and implementing projects. In addition, of course, they gain greater responsibility over financing the development of public infrastructure. This increased responsibility comes at a time when needs for public capital are growing as a result of increasing levels of urbanization. The Indonesian population is now over 40% urban and urban population is growing at rate of nearly 6% per year. Furthermore, decentralization and urbanization are taking place at a time of increased fiscal stress at the central level. These constraints on the central budget will likely mean that even less money will be available to finance and/or subsidize regional capital developments than would otherwise be the case. All this suggests that regional governments will need to shoulder an increasing share of the burden in financing public capital development. Much of this burden will have to be carried out through borrowing of one type or another. Although the rationale for regional borrowing is clear and strong, the debt experience of regional governments in most countries in the developing world has not been particularly auspicious. In some cases, regional governments have borrowed excessively3 and loan repayment has, in general, been especially problematic.4 Major difficulties notwithstanding, there has been little thorough empirical analysis of regional government borrowing or repayment in particular countries. This paper attempts to help fill that void. The rest of the paper is organized as follows. First, a basic description of regional borrowing in Indonesia is offered. Here, some fundamental information on the main lending mechanisms is provided and the history of regional government and regional government enterprise borrowing through these mechanisms over the past 20 years is empirically described. Second, the paper examines the borrowing and repayment experience of Indonesian local governments, in particular. The focus in this section of the paper concerns the potential impact of local government fiscal capacity on borrowing and repayment. A simple model is specified and estimated; empirical results derived from the model are presented and discussed. Third, the paper discusses some major policy implications of the analysis. Finally, the paper closes with a summary of the main points and some conclusions.

Most regional borrowing over the past 20 years or more has been carried out via central government mechanisms, that is, the SLA and RDA. Until now, borrowing has been concentrated on Java and, to a lesser extent, on Sumatera. About two-thirds of total borrowing has been undertaken by the regional water authorities, PDAMs. Overall, aggregate amounts borrowed have been very small, less than one half of 1% of GDP (in 1999 terms). The terms and conditions of SLA and RDA loans have been highly favorable to regional borrowers: extensive grace periods, long terms to maturity, and significantly subsidized interest rates. Sympathetic terms and conditions notwithstanding, repayment of SLA and RDA loans has been very poor indeed. Moreover, repayment has steadily gotten worse over time; currently, arrears may be over 50% of total amounts due. While local governments, at least, appear to have borrowed well within their fiscal capacities to repay, they have not, in fact, repaid their loans to an adequate degree. It is hard to escape the conclusion that local governments, in general, have simply proved unwilling to repay their debts.35 Regional governments and their enterprises will need to increase significantly their borrowing in the years ahead. This will be necessary both to meet growing demands for public infrastructure services, in the context of increasing decentralization and urbanization and given mounting constraints on the central budget, and in order to invest in public capital that stimulates regional economic development. Regional borrowing cannot and indeed probably should not increase much, however, until regional governments become significantly more creditworthy. This means, of course, that the problem of regional government unwillingness to repay debt will have to be addressed head on. SLA and RDA managers could begin to attend to this problem by not rewarding those regional borrowers in arrears on past debt with additional loans. In addition, over the medium term, SLA and RDA loan portfolios must be restructured with a view to getting repayments back on track and increasing the number of creditworthy regional borrowers in the country. In the not too distant future, SLA and RDA lending as it now exists must come to an end; the current system of regional credit must be replaced by more independent and market-oriented mechanisms. No decisions on the exact form of the latter have yet been taken and much work remains to be done over the medium term. Although the current repayment problem is not a function of insufficient regional revenues per se, such resources must be enhanced and stabilized so that lack of fiscal capacity does not become a problem in the context of the increased borrowing that must take place in the future. Decentralizing some authority over the property tax and improving the allocation of DAU are priority items in this regard. The use of revenue and asset pledge mechanisms will assist in securing future lending. The development and implementation of regional budget interventions and default or bankruptcy legislation could also help greatly in this regard. Finally, explicitly linking regional loans with grants in a system of public capital financing may help expand borrowing opportunities among remaining fiscally weak regional governments. It is a relatively simple matter, of course, to list the efforts that should be undertaken to enhance regional creditworthiness and expand regional borrowing. But central government must be prepared to actually undertake these initiatives. Until now, central government has not been sufficiently proactive in these matters; central authorities have been well aware of the regional arrears problem for many years, for example, and they have just chosen to live with it. This, therefore, suggests the foremost challenge. Central government has the capacity to design and implement these policies. Is it willing?