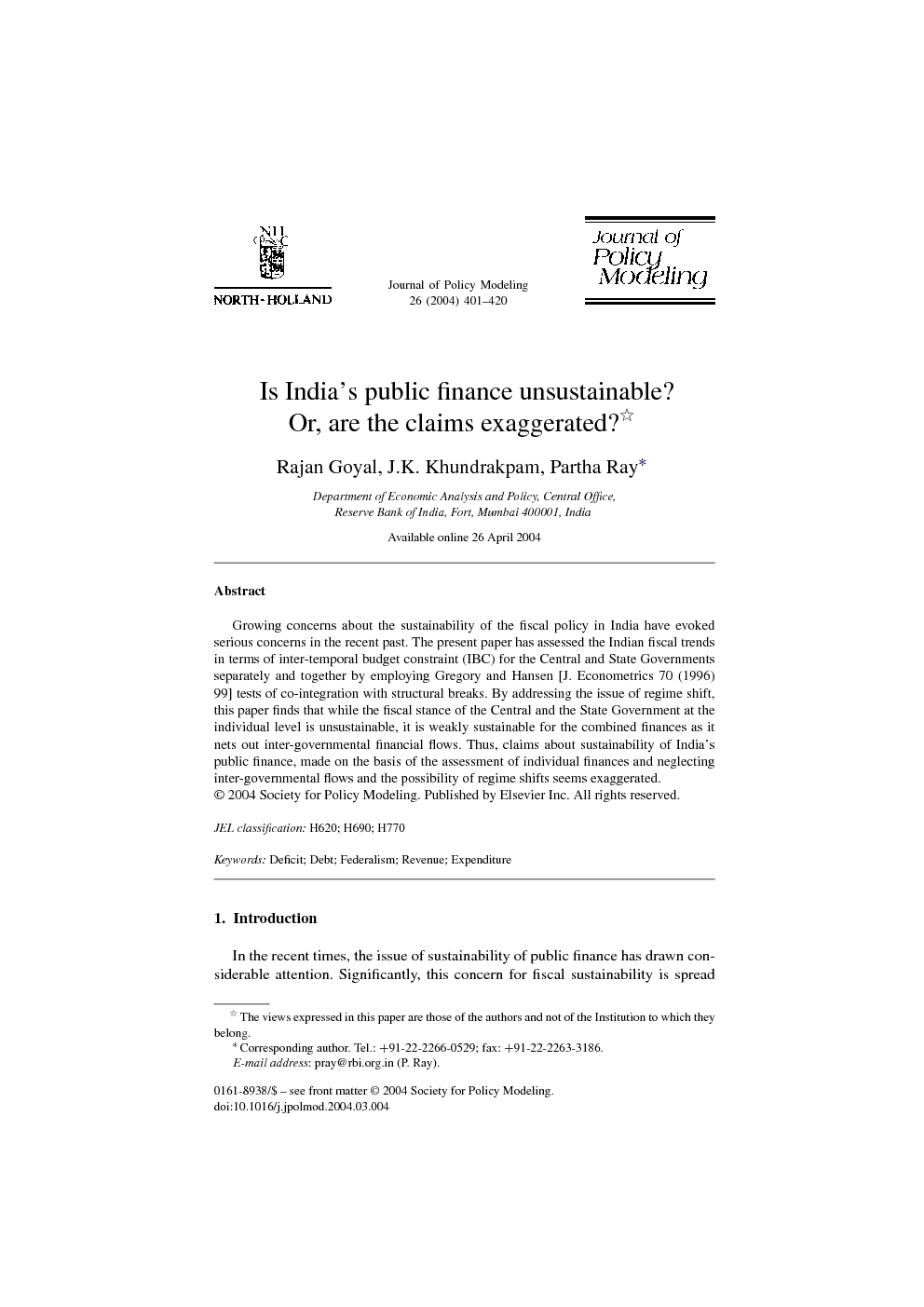 Growing concerns about the sustainability of the fiscal policy in India have evoked serious concerns in the recent past. The present paper has assessed the Indian fiscal trends in terms of inter-temporal budget constraint (IBC) for the Central and State Governments separately and together by employing Gregory and Hansen [J. Econometrics 70 (1996) 99] tests of co-integration with structural breaks. By addressing the issue of regime shift, this paper finds that while the fiscal stance of the Central and the State Government at the individual level is unsustainable, it is weakly sustainable for the combined finances as it nets out inter-governmental financial flows. Thus, claims about sustainability of India’s public finance, made on the basis of the assessment of individual finances and neglecting inter-governmental flows and the possibility of regime shifts seems exaggerated.

The present paper primarily focuses on three issues in its attempt to extend the existing analysis on sustainability of Indian public debt. First, whether India’s public debt is sustainable if structural changes on account of regime changes are taken into account. Second, whether financial intermediary role of the union government is a significant factor influencing the sustainability of the public debt. Third, if the public debt is found to be sustainable, what is the degree of sustainability? From the series of tests conducted on Central, States and combined finances it is found that while the finances of both Central and State Governments are unsustainable individually (whether or not the allowance is made for structural break), their combined finances are sustainable when structural break is taken into account. Investigation as to why combined finances are sustainable when individual finances are unsustainable brings out the importance of financial intermediary role of the Central Government. In India, to bring about vertical as well as horizontal equity across the government finances, there are sizeable statutory and non-statutory transfers from the Centre to the State Governments. These inter-governmental flows lead to overstatement/overestimation of the gap between revenue and expenditure of the Central Government. At the combined level, with the netting out of inter-governmental flows, the gap between revenue and expenditure becomes narrower. To that extent, conclusions regarding sustainability of Indian public debt based on the individual level of governments are biased. It emerges that any credible assessment of public debt in the Indian context should necessarily be of the combined finances, which excludes the inter-governmental flows. Furthermore, we find that public debt of the combined Government sector is weakly sustainable, implying that the speed at which the inter-temporal borrowing constraint is satisfied is quite slow and is likely to result in higher growth rate of debt. Higher growth of debt could result in rise in interest rate, which might eventually create problems for marketing or rolling over of public debt in future. In other words, while fiscal stance of Government is sustainable at least in the short-run, for long-run sustainability government needs to alter its fiscal policies to prevent any adverse repercussions.