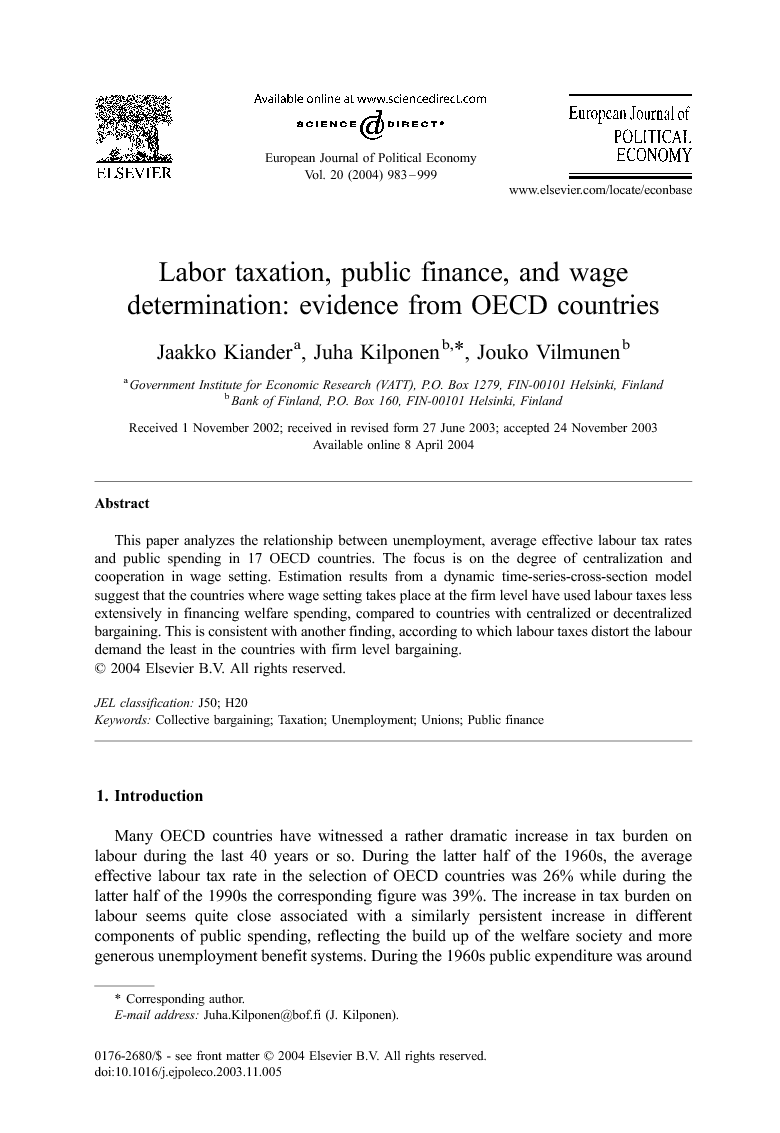 This paper analyzes the relationship between unemployment, average effective labour tax rates and public spending in 17 OECD countries. The focus is on the degree of centralization and cooperation in wage setting. Estimation results from a dynamic time-series-cross-section model suggest that the countries where wage setting takes place at the firm level have used labour taxes less extensively in financing welfare spending, compared to countries with centralized or decentralized bargaining. This is consistent with another finding, according to which labour taxes distort the labour demand the least in the countries with firm level bargaining.

Many OECD countries have witnessed a rather dramatic increase in tax burden on labour during the last 40 years or so. During the latter half of the 1960s, the average effective labour tax rate in the selection of OECD countries was 26% while during the latter half of the 1990s the corresponding figure was 39%. The increase in tax burden on labour seems quite close associated with a similarly persistent increase in different components of public spending, reflecting the build up of the welfare society and more generous unemployment benefit systems. During the 1960s public expenditure was around 30% of GDP, peaked almost to 49% during the first half of the 1990s, and has since come down to 47% as the OECD average. A simple correlation coefficient between public expenditure and effective labour tax rates during the period of 1970–1999 is 0.84, but only 0.32 between average effective capital tax rates and public expenditure. Consequently, it seems that a large part of the increase in public expenditure in OECD countries is associated with an increase in the tax burden on labour. One explanation for this is related to wage bargaining institutions and unions. Namely, unions can be considered national encompassing organizations, when confederation of unions have been granted an exclusive control over wages or the wage setting is well coordinated among the trade unions. Under such circumstances, unions cannot escape the negative externalities of their own actions and may become aware of a linkage among wages, taxes and benefits received. This may result in more moderate responses of wage to labour income taxes, and subsequently, encourage the use of labour taxation as a means of financing increased public spending.1 In particular, during the phase of welfare state expansion in many European countries, trade unions could expect to receive social benefits in return for wage moderation agreed in corporatist income policies, and for endorsing reforms than in the long-run have been beneficial for the economy and society as at large (Ebbinghaus and Manow, 2001). Summers et al. (1993) show analytically how the wage moderation effect arises in an efficient bargaining model, where unions and employers negotiate the wage and labour input levels simultaneously. They define centralized wage setting as unions' ability to perceive the government budget constraint, that is, to be aware of a linkage between taxes and benefits received. They also suggest that it would be socially optimal to choose higher labour taxes when the unions become more encompassing. This conclusion stems from the model's prediction that labour taxation is less distorting with respect to labour supply decisions in countries with more centralized wage bargaining. In a more recent study (Kilponen and Sinko, 2001), these results are extended to the presence of a monopoly union with endogenous working hours. In this paper, we test empirically the validity of the two above mentioned hypotheses of this literature. The first hypothesis states that decentralized wage setting results in a more distorting effect of labour income tax with regard to employment when compared to centralized wage setting. The second hypothesis states that labour taxes are used more extensively to finance public spending in countries where the wage setting is centralized or otherwise coordinated between the unions, when compared to countries with decentralized wage setting. In the empirical analysis, we estimate a dynamic time-series-cross-section model for unemployment rates and labour income tax rates in 17 OECD countries during the period 1970–1999. We find that the response of unemployment to labour income tax is lowest in countries where wage setting is centralized. Moreover, our regression explaining effective labour income tax rates suggests that, when financing their public spending, countries where wage bargaining is centralized have relied more on labour income taxation than countries with decentralized wage setting. The paper is organized as follows. Section 2 presents the data and provides stylized facts, and 3 and 4 provides estimation results from the dynamic time-series-cross-section model. Section 5 concludes.