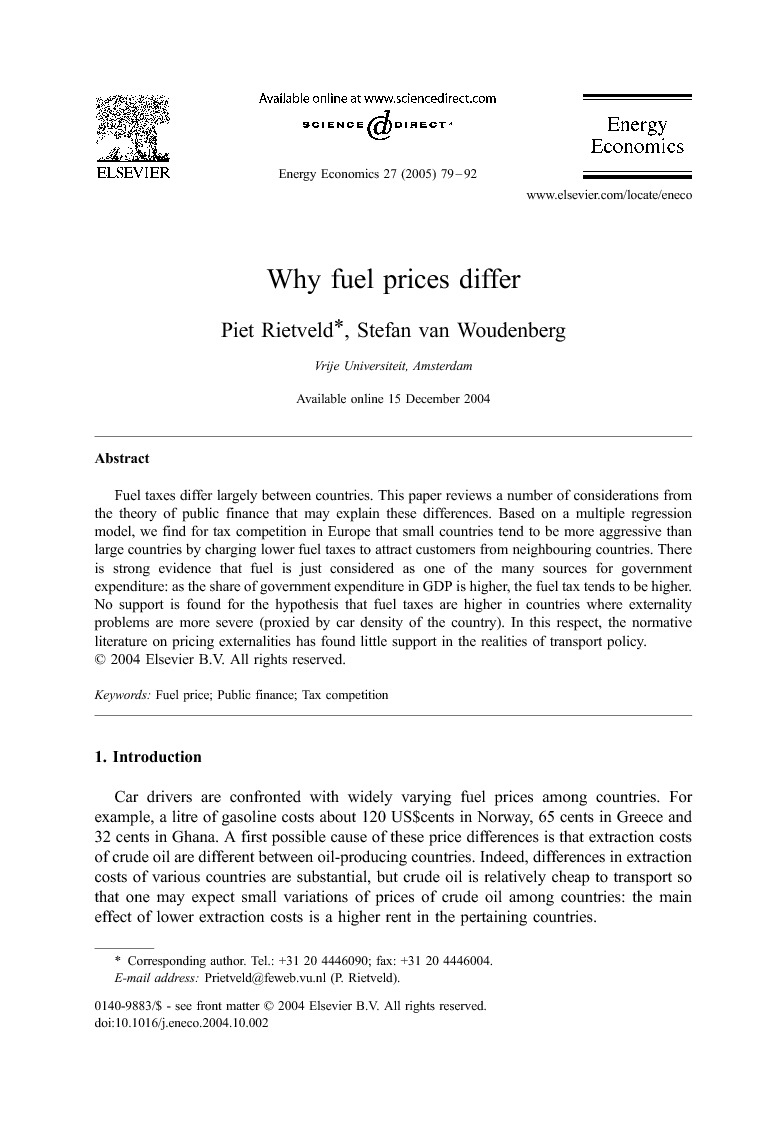 Fuel taxes differ largely between countries. This paper reviews a number of considerations from the theory of public finance that may explain these differences. Based on a multiple regression model, we find for tax competition in Europe that small countries tend to be more aggressive than large countries by charging lower fuel taxes to attract customers from neighbouring countries. There is strong evidence that fuel is just considered as one of the many sources for government expenditure: as the share of government expenditure in GDP is higher, the fuel tax tends to be higher. No support is found for the hypothesis that fuel taxes are higher in countries where externality problems are more severe (proxied by car density of the country). In this respect, the normative literature on pricing externalities has found little support in the realities of transport policy.

Car drivers are confronted with widely varying fuel prices among countries. For example, a litre of gasoline costs about 120 US$cents in Norway, 65 cents in Greece and 32 cents in Ghana. A first possible cause of these price differences is that extraction costs of crude oil are different between oil-producing countries. Indeed, differences in extraction costs of various countries are substantial, but crude oil is relatively cheap to transport so that one may expect small variations of prices of crude oil among countries: the main effect of lower extraction costs is a higher rent in the pertaining countries. A second factor that determines fuel prices concerns the cost of refining the crude oil and of distributing the fuel. Oil refineries may be different in terms of their costs and productivity, and spatial variations in distribution costs occur because of differences in infrastructure and distances to oil refineries. Given the limited number of oil companies active in most countries, there may be oligopolistic tendencies in the market. In addition, when fuel stations are local monopolists, they may charge a mark-up. In most countries, the share of refining and distribution of fuel in total costs is rather small, however, so that this is not an important explanation of price variations .The third factor concerns taxes. In most countries, taxes form the largest component of the fuel price paid by consumers. For example, in the Netherlands, the tax share of the fuel price equals about 70%. This fact reveals that the most important source of variation in fuel prices must be taxes. A similar value is found in Japan. In other parts of the world, taxes on fuel are much lower. For example, the share of taxes in the fuel price of the USA is about 25%. In some countries in Africa and Asia, especially the oil-producing ones (for example Nigeria, Iraq and Iran), fuel prices are extremely low. Here, prices are even lower than the production costs. Thus, on what basis do governments determine fuel taxes? Finding an answer to this question is the main aim of this paper. Based on the literature on public finance, we will discuss a number of considerations governments may have to determine the level of taxes (Section 2). In Section 3, we show empirical research for about 100 countries1 to explain the fuel tax level, taking into account the perspectives found in the literature. Section 4 follows with refined estimates, and Section 5 concludes.

Fuels are an attractive tax base for governments since costs involved in tax collection are low and tax evasion is difficult. The levels of the taxes imposed appear to differ strongly between countries. We survey several principles from the theory of public finance that may explain these differences. For example, we consider equity and benefit principles, efficiency considerations, tax competition and externality corrections. For tax competition, we conclude that, in Europe, small countries tend to be more aggressive than large countries by charging lower fuel taxes. Outside Europe, city-states such as Singapore and Hong Kong tend to do the opposite: they charge higher taxes than their neighbours, and, to avoid cross-border fuelling problems, they impose particular restrictions. The relevance of the benefit principle for fuel taxes is confirmed in Europe. Fuel taxes tend to increase with GNI per capita, which, as argued in the text, may both reflect relevance of equity principles (ability to pay) and efficiency principles (reduction of distortions given low price elasticities of demand). Furthermore, there is strong evidence that fuel is just considered as one of the many sources for government expenditure: when government expenditure as a share of GDP is higher, the fuel tax tends to be higher. Maybe, surprisingly, the statistical material gives no support to the hypothesis that fuel taxes are higher in countries where externality problems are more severe (proxied by car density of the country). This density variable captures both environmental externalities and congestion externalities. Thus, the normative literature on pricing externalities in transport has found little support in the realities of policy-making. On the other hand, one must realise that valuation of externality costs tends to increase with income per capita, and, for this variable, we found a positive effect for Europe. Finally, countries that are rich in oil resources, as proxied by OPEC membership, tend to have much lower oil prices.