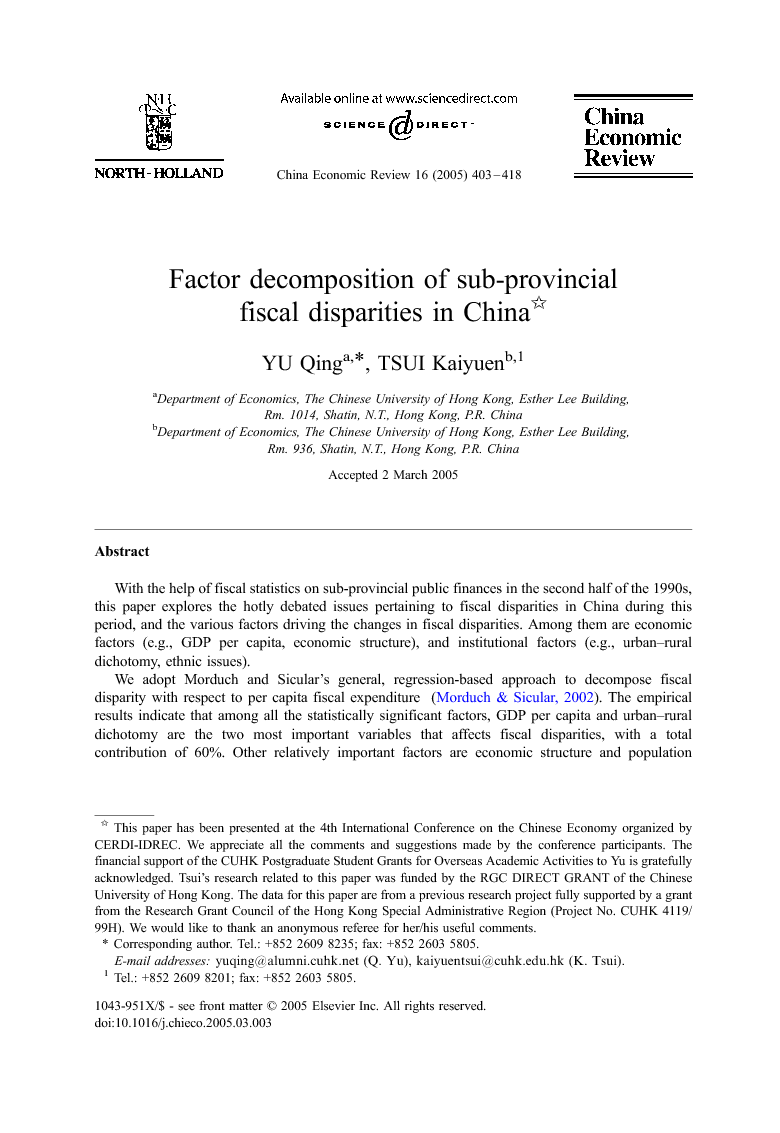 With the help of fiscal statistics on sub-provincial public finances in the second half of the 1990s, this paper explores the hotly debated issues pertaining to fiscal disparities in China during this period, and the various factors driving the changes in fiscal disparities. Among them are economic factors (e.g., GDP per capita, economic structure), and institutional factors (e.g., urban–rural dichotomy, ethnic issues). We adopt Morduch and Sicular's general, regression-based approach to decompose fiscal disparity with respect to per capita fiscal expenditure (Morduch & Sicular, 2002). The empirical results indicate that among all the statistically significant factors, GDP per capita and urban–rural dichotomy are the two most important variables that affects fiscal disparities, with a total contribution of 60%. Other relatively important factors are economic structure and population density. Several features of fiscal expenditure in China identified by our empirical findings together with their corresponding policy implications are discussed.

This paper is an attempt to study the forces shaping sub-provincial fiscal disparities. Putting the latter in the limelight in recent years is the alleged sub-provincial fiscal crisis symbolized by such pathological phenomena as arbitrary charges (luan shoufei), wage arrears and local fiscal deficits. To some commentators, the design of the tax-sharing reform in 1994 has induced vertical redistribution of fiscal resources often at the expense of sub-provincial governments and has accentuated the plight of sub-provincial governments especially in poor regions without at the same time putting in place a need-based intergovernmental system to seriously address the problem of fiscal disparities (see, e.g., Jia & Bai, 2002, Lou et al., 2002 and World Bank, 2002). Some pioneering works have already been done on the issue of fiscal disparities, e.g., Park, Rozelle, Wong, and Ren (1996), Wong (1997), World Bank (2002), though most if not all of these studies have only looked into sub-provincial fiscal disparities with respect to specific regions, falling short of a comprehensive picture delineating the country as a whole. Nor is there any study which sorts out the factors contributing to fiscal disparities. The purpose of this paper is to fill this lacuna by using a data set of nationwide sub-provincial statistics to identify the significant determinants of fiscal disparities and quantify their contributions to overall sub-provincial fiscal inequality. This paper explores the extent to which two sets of factors impinge on sub-provincial fiscal disparities. One of them pertains to economic factors. Cross-country research (see, e.g., Tanzi, 1987) often suggests that inter-country fiscal disparities may be explained by large variations in the levels of economic development and economic structure. Given China's prodigious regional disparities, it is not inconceivable that the same applies to China. Not only is the revenue-generating capacity of a sub-provincial jurisdiction determined by the level of economic development, but also it is affected by the interaction between the local tax system and the economic structure. Local governments governing a primarily agricultural, particularly grain-based, economy are more revenue-starved than those with large non-agricultural sectors deriving revenues mainly from business tax and value-added tax. Large inter-jurisdictional variations in these economic determinants in China may thus help explain China's fiscal disparities. In so far as the Chinese government plays a rather interventionist role in shaping economic development, economic factors alone perhaps do not fully explain fiscal disparities. The evolution of institutions and policies peculiar to China may also be important in exerting their impact on the spatial distribution of fiscal resources. Among the institutional factors is the urban-bias policy, a legacy of the pre-reform planning system. Furthermore, often out of political considerations, policies ranging from the go-west campaign (xibu dakaifa) to assistance to ethnic minorities often are region-based with spatially differential fiscal implications. This paper is an empirical exercise to test how important these two sets of factors are in shaping China's fiscal disparities. With the help of the factor decomposition approach proposed by Morduch and Sicular (2002), we mount an empirical analysis to find out how significant the above factors are as determinants to overall sub-provincial fiscal disparities and quantify their contributions. The organization of the paper is as follows. A brief introduction to the background leading to the two hypotheses discussed above is the subject of the next section. Section 3 reviews the approach to factor decomposition. Section 4 provides a description of the data used and presents our empirical findings. Policy implications distilled from the empirical results are discussed in Section 5. The concluding section highlights the major findings of this paper.

Shedding light on those issues of fiscal disparities that have attracted the attention of many researchers and government officials, this paper puts the debate on a rigorous footing by providing a framework to explore the economic and institutional factors behind the changes in fiscal disparities. From this framework, two hypotheses emerge summarizing how these factors ultimately shape sub-provincial fiscal disparities. The regression-based decomposition approach proposed by Morduch and Sicular (2002) and Fields (2003) is invoked to test these hypotheses. It is worth highlighting that the paper tries to paint a more comprehensive picture of China's sub-provincial fiscal disparities with the help of a set of fiscal data covering all sub-provincial jurisdictions. The empirical results indicate that among all these statistically significant factors, GDP per capita and urban–rural dichotomy are the two most important variables that affect fiscal disparities, with a total contribution of 60%. Other factor such as economic structure also plays a very important role. One policy implication of this finding is that large differences in levels of economic development and economic structures may lead to different revenue-generating capacities and result in serious mismatches between the expenditure responsibilities and fiscal capacities of local authorities. It is not surprising that crafting a transparent and need-based fiscal transfer system has been a subject that has received much attention in recent years. In so far as the large differences in economic structures in conjunction with the current local tax system may have aggravated the problem of fiscal disparities, re-designing the current local tax system by, say, revamping the agricultural tax system may help address the problem of fiscal disparities. Next, our empirical findings indicate that the allocation of fiscal resources is not purely based on economic considerations. Not the least important are institutional and political factors in determining the allocation of fiscal resources. Foremost among these factors is the urban status of a spatial unit, which contributes significantly to the access of fiscal resources, probably a legacy of China's pre-reform planning system.