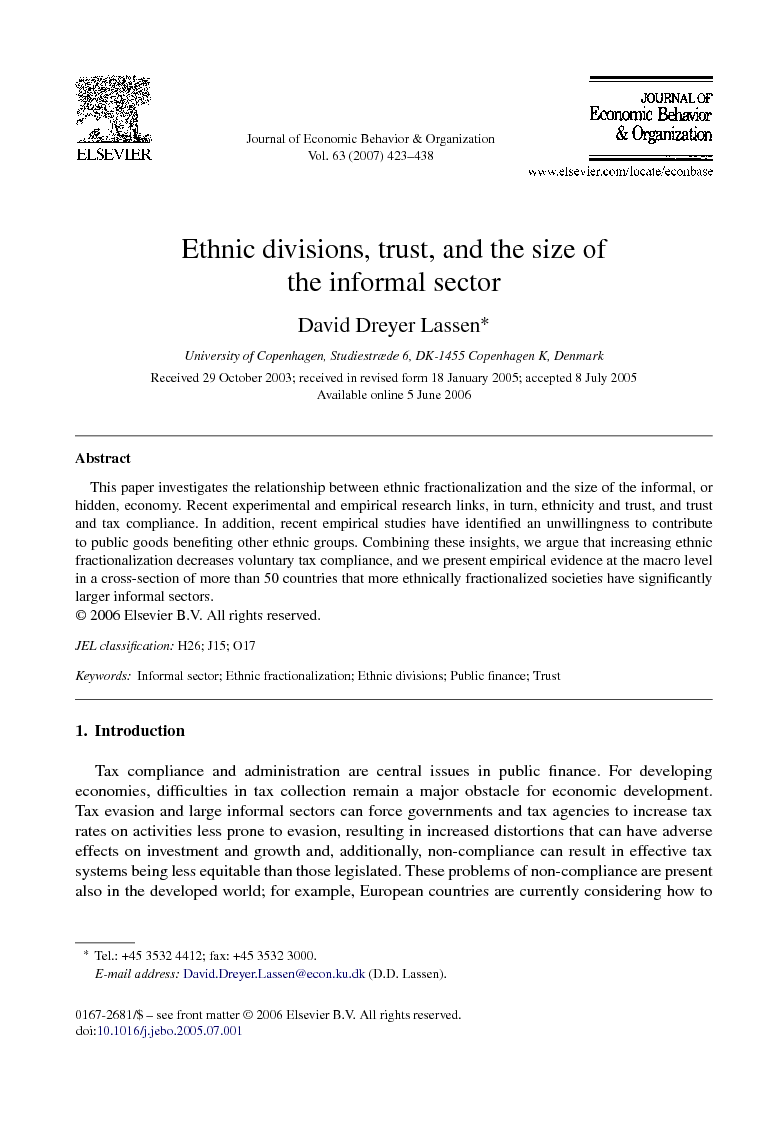 This paper investigates the relationship between ethnic fractionalization and the size of the informal, or hidden, economy. Recent experimental and empirical research links, in turn, ethnicity and trust, and trust and tax compliance. In addition, recent empirical studies have identified an unwillingness to contribute to public goods benefiting other ethnic groups. Combining these insights, we argue that increasing ethnic fractionalization decreases voluntary tax compliance, and we present empirical evidence at the macro level in a cross-section of more than 50 countries that more ethnically fractionalized societies have significantly larger informal sectors.

The analysis of this paper underscores the importance of social structure and trust on economic outcomes, in this case the size of the informal sector and the degree of tax compliance. The empirical results presented above suggest a statistically significant and economic sizeable effect of ethnic heterogeneity: In the preferred specification, (4) above, an increase of one-standard deviation in ethnic fractionalization increases the size of the informal sector by 4.7 percentage points, comparable in magnitude to the effects of a one-standard deviation increase in corruption (7.1 percentage points) and in the urban population (−5.4 percentage points). Further, the estimated effect of a one-standard deviation increase in ethnic fractionalization was reasonably stable across specifications, ranging from 4.0 to 5.7 percentage points. Future work should aim at extending the sample of countries to include countries with more variation. For example, we conjecture that including estimates from more African countries would support the hypothesis put forward here: African countries are ethnically very heterogenous and, at the anecdotal level, characterized by large informal sectors. Another possibility would be to use as a dependent variable the share of the informal labor force in percent of total labor force, as this measure is available for a different set of countries. A crucial problem that more data will not solve, however, follows from the nature of the informal sector data; this data is (perhaps very) imprecisely estimated, and therefore one should be very cautious in making results such as these the basis for policy intervention or policy recommendation. Rather, the goal of the present analysis is to emphasize, once again, the importance of social and ethnic heterogeneity on public sector outcomes. As for economic development, the results of this paper contribute to the bad news associated with ethnic fractionalization. While Collier, in a careful review of the evidence, concludes that the difficulties facing ethnically diverse societies have been greatly exaggerated, he concedes that regarding “the public sector there is evidence that ethnically differentiated organizations encounter problems” (p. 154). In particular, the results of Easterly and Levine (1997) and Alesina et al. (1999) suggest that public expenditures are lower, and less efficiently allocated, in fractionalized communities. The results of this paper confirm the problems of the public sector in ethnically fractionalized societies, but suggest that such problems exist also on the revenue side of the public budget. This suggests that trying to improve the public sector in fractionalized societies by improving allocative efficiency on the expenditure side (for example, as suggested by Collier, by reducing ethnic employment patronage) could, while securing a better vertical contract, be insufficient to secure a better public sector if problems of the horizontal contract persist. In a broader context, Collier suggests that one should simply accept the fact that the public sector is relatively less effective in diverse societies than in more homogenous societies, so that the role of the public sector relative to the private sector should be redefined in such societies. This does not necessarily mean that public goods will not be provided, as it could to some extent be provided through ethnic groups, but perhaps that public goods will be provided less effectively and in smaller scale. The results also provide another, stronger case for decentralization in ethnically divided societies. Decentralization into more ethnically homogenous regions is often offered as a way of reducing tensions and avoiding political gridlock in fractionalized societies, and the results provided in this paper suggests that decentralization should include also tax collection and, possibly, tax policy if centralized taxation is not deemed fair by citizens. Finally, the fact that ethnically fractionalized societies have larger informal sectors could also be part of an explanation of the fact that more fractionalized societies have less public goods provision in percent of GDP. If true income is more underestimated in fractionalized communities, then public goods provision relative to true income (rather than reported income) may turn out not to be very different between more and less heterogenous communities. The method adopted in this paper has been to apply results obtained through experiments in the laboratory to real world macro level data, bridging results from political and social psychology with public finance. Interesting avenues for future work could be to use such methods for a broader range of public policy problems.