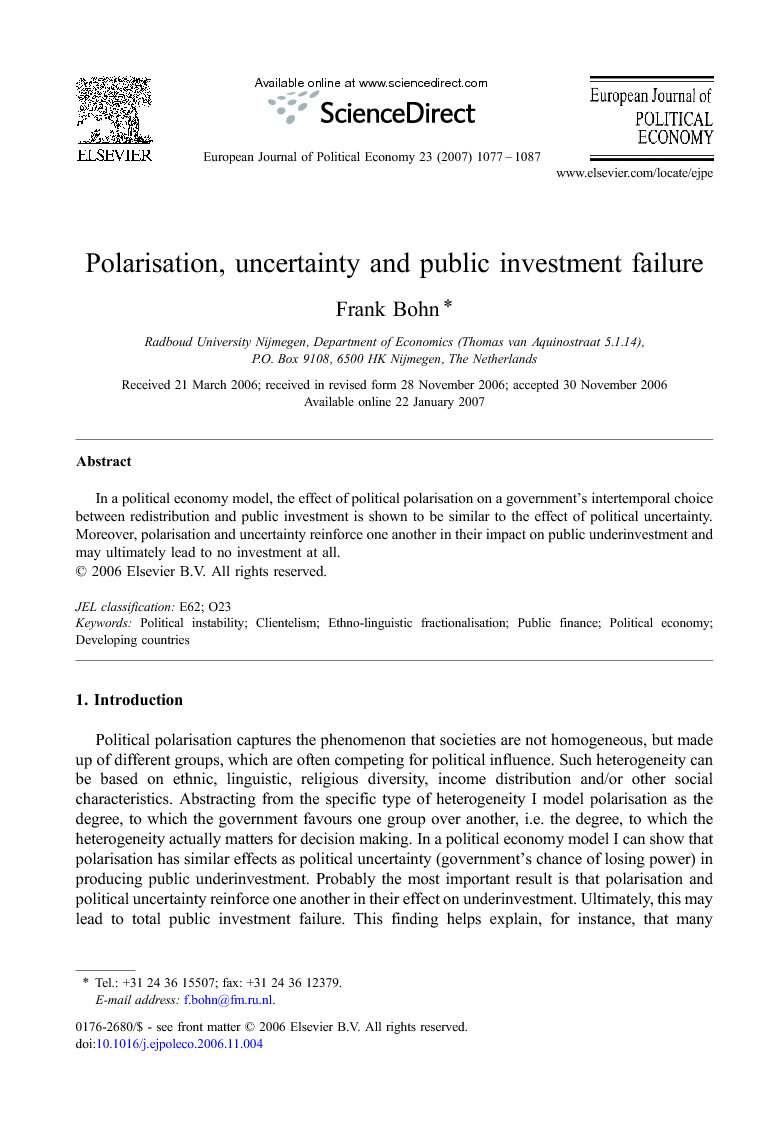 This paper captures a government's decision problem between efficient public investment and redistribution in a parsimonious model of political instability. The chance of another government being in power and taking undesirable decisions in the future produces a negative spill-over onto those in power today. In this paper, it is actually optimal for the current government to totally refrain from spending on public investment, if there is heavy discounting produced by political instability. As political stability increases (and discounting decreases), a threshold is reached, beyond which it is optimal to increase investment with marginal investment being strong at first. Then, however, the additional investment increments become smaller, because marginal investment profitability goes down. The theoretical model captures the impact of two distinct causes of political instability as they appear in reality: polarisation (rivaling groups in society) and political uncertainty about the future government. Probably the most important result is that their effect on a government's effective discounting is multiplicative. Underinvestment in infrastructure, anti-corruption measures, health, or education is particularly severe in a country with a legacy of group-specific policies and numerous government changes. Therefore, the paper offers an explanation for appalling levels of efficient public investment in sub-Saharan African countries, which are troubled by ethnic strife combined with a history of coup d'états or revolutions. But the model may also help explain inefficient government sectors in unstable Western democracies such as France (during the Forth Republic) or Italy (before the break-up of the traditional party system in 1992).Nonetheless, for several reasons the modeling approach seems to be particularly relevant for certain low-income countries. First, political uncertainty in some of these countries is inherent to the political structure of the country rather than caused by electoral uncertainty as in Western democracies. Capturing political uncertainty by an exogenous parameter may, therefore, be deemed more appropriate for such countries. Second, ethnic diversity is a real additional problem in many low-income countries. This means that polarisation is a much more clear-cut and severe problem than in Western democracies where the electoral process entices the parties to compete for the votes in the centre. Third, the disregard for private sector decisions on labour, consumption and investment would certainly not be suitable simplifications for industrialised countries, but may be seen as a first approximation in some low-income countries, where there is either no economic growth or it depends on external factors (like foreign direct investment). Relaxing some of the assumptions of this paper may offer scope for future research. It may be worth while exploring if there are any trade-off effects when other sources of government revenue are included. Another extension would be to model the effect of public investment on growth, when the private sector optimises its investment and consumption decisions. A further extension might be to capture the interdependence between growth and political instability. So far, political instability was endogenised in the literature by modeling voting10 or by modeling insurgencies either in response to the relative military strengths of government and rebels (Grossman, 1999) or dependent upon “rent-seeking economic reforms” (McBride, 2005). However and particularly relevant for capturing the government decision problem in low-income countries: better economic conditions directly affect the chance of a coup d'état or revolution. For these countries, it seems appropriate, therefore, to capture the feedback of government actions on growth and model its interdependence with political instability. It would be interesting to explore the link to the literature on endogenous growth and rent-seeking such as Ehrlich and Lui (1999) or Park et al. (2005).