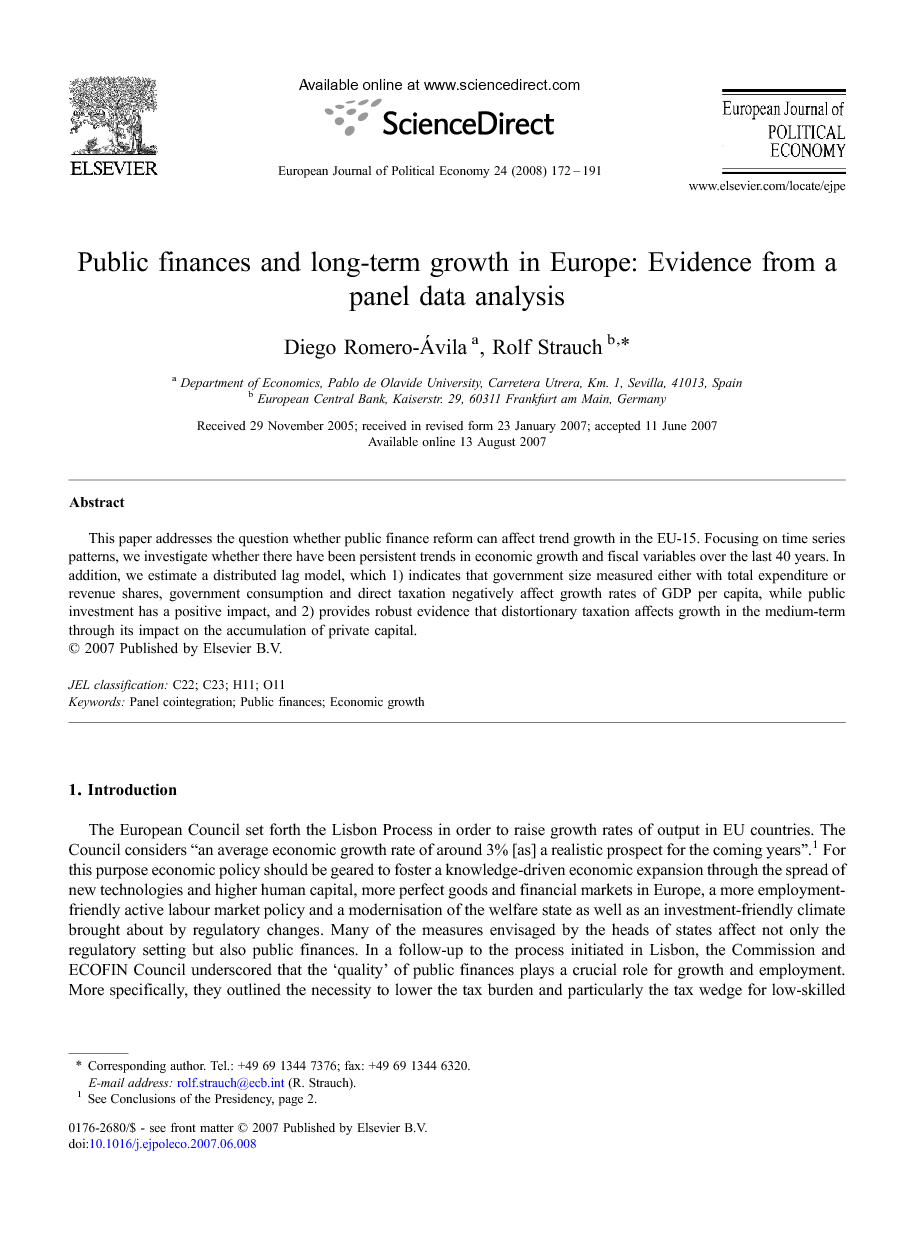 This paper addresses the question whether public finance reform can affect trend growth in the EU-15. Focusing on time series patterns, we investigate whether there have been persistent trends in economic growth and fiscal variables over the last 40 years. In addition, we estimate a distributed lag model, which 1) indicates that government size measured either with total expenditure or revenue shares, government consumption and direct taxation negatively affect growth rates of GDP per capita, while public investment has a positive impact, and 2) provides robust evidence that distortionary taxation affects growth in the medium-term through its impact on the accumulation of private capital.

The European Council set forth the Lisbon Process in order to raise growth rates of output in EU countries. The Council considers “an average economic growth rate of around 3% [as] a realistic prospect for the coming years”.1 For this purpose economic policy should be geared to foster a knowledge-driven economic expansion through the spread of new technologies and higher human capital, more perfect goods and financial markets in Europe, a more employment-friendly active labour market policy and a modernisation of the welfare state as well as an investment-friendly climate brought about by regulatory changes. Many of the measures envisaged by the heads of states affect not only the regulatory setting but also public finances. In a follow-up to the process initiated in Lisbon, the Commission and ECOFIN Council underscored that the ‘quality’ of public finances plays a crucial role for growth and employment. More specifically, they outlined the necessity to lower the tax burden and particularly the tax wedge for low-skilled workers, make benefit systems more supportive to employment, shift resources towards productive expenditures in health, education and physical infrastructure, and to ensure the sustainability of public finances. The conclusions of the European Council on the European economic performance in the future leave open which growth model actually best reflects the intentions of the heads of state. If they implicitly assume an exogenous growth framework, then we could expect output to speed up in the short and medium run but then level off again. Conversely, the structural changes which they envisage to make Europe a more integrated, competitive and productive economy may also imply that trend growth rises permanently from currently 2–2.5% to 3% per year. In this paper we will investigate which growth pattern would be the outcome of policy reforms in the future course of the Lisbon process. Analysing past experiences in European countries should indicate whether public finances have the potential to raise growth rates permanently, i.e. affecting trend growth, or whether one could at best expect a transitory improvement. Numerous ‘Barro-type’ regression studies have claimed to find evidence for endogenous growth if diverse policy and institutional variables included in the regressions affect long-term performance. However, these studies mainly exploit the cross sectional variation of very large samples and are not very informative if we want to focus on the European context. Using the standard set-up of these studies, relying on long-term averages of output growth, we would quickly exhaust the degrees of freedom for European countries. Moreover, this approach would not be appropriate since the European sample is rather homogeneous in several of these explanatory characteristics.2 As an alternative, a small literature has emerged with a main focus on the time series implications of the two strands of theory. If the policy variable follows a specific time series pattern, economic growth should exhibit the same behaviour under endogenous growth theory. Conversely, the time series properties of the policy-variable do not necessarily have to coincide with output growth according to exogenous growth models. Fiscal variables are a good testing ground for these hypotheses, since distortionary taxation and productive expenditures are assumed to have a permanent effect on economic growth according to endogenous growth theory, whereas they should have only level effects from a neoclassical perspective. We will use these predictions as a basis to interpret the observable pattern of economic growth and public finance developments, which has not systematically been done for Europe. This is the gap in the empirical literature that our study wants to close. In first place, we will analyse the time series properties of output growth and fiscal policy variables in order to determine their degree of persistence. In second place, we will estimate the impact of fiscal policies on trend growth by employing the distributed lag approach. The paper is organised as follows. Section 2 briefly describes the theoretical background and the shortcomings of the empirical evidence existing in this area. Section 3 describes the data used in the empirical exercise. In Section 4 we analyse the time series properties of real per-capita output growth and public finance variables. This analysis will show that there are persistent developments in per-capita GDP growth and fiscal variables, which are broadly in line with some theoretical predictions on long-term growth. In Section 5 we conduct distributed lag estimations as a more systematic check of the long-term impact of public finances and Section 6 concludes.

The Lisbon Process assigns a prominent role to public finance reform in order to foster economic growth. The main purpose of our analysis is therefore to shed some light on the relation between public finances and growth in the EU-15. Most importantly, this requires determining whether public finances provide policy instruments contributing to higher trend growth, or whether they can at best be expected to have a short-run impact on economic performance. Following the approach of some studies in this field that exploit the time series properties of the data, we find some persistent deterministic changes in per-capita GDP growth rates and public finances. Nevertheless, when we look at stochastic trends, it appears that public finance variables have generally shown persistence over time while growth rates of output have remained fairly stable. This pattern does not exclude a long-term effect of fiscal variables per se, if expenditures and revenues have opposite long-term effects and co-move. Using recently developed panel cointegration techniques, we have indeed found overwhelming evidence of cointegration between both sides of the budget, as would be expected on theoretical grounds. We then estimate the long-run effect of fiscal policies on growth using a distributed lag approach. We improve on previous studies on the nexus of fiscal policies and growth by better controlling for real business cycle effects and reverse causality as well as by using better proxies for taxation. The main findings are that the expenditure side of the budget appears to consistently affect long-run growth over the business cycle. Specifically, government size and government consumption are found to have a clear negative effect on growth, while public investment positively affects growth. On the revenue side, evidence exists for a negative effect of direct taxation on growth in our preferred specification. Moreover, a robust negative impact of direct taxation on physical capital accumulation is confirmed by our data. This impact seems to work primarily through the taxation of labour income which may lead to wage pressure, thus lowering profits and investment in unionized European labour markets. Taken as a whole, our results stand in contrast to previous studies on this issue (e.g. Evans, 1997 and Karras, 1999) which did not appropriately take into account the financing relations implied by the intertemporal budget constraint.