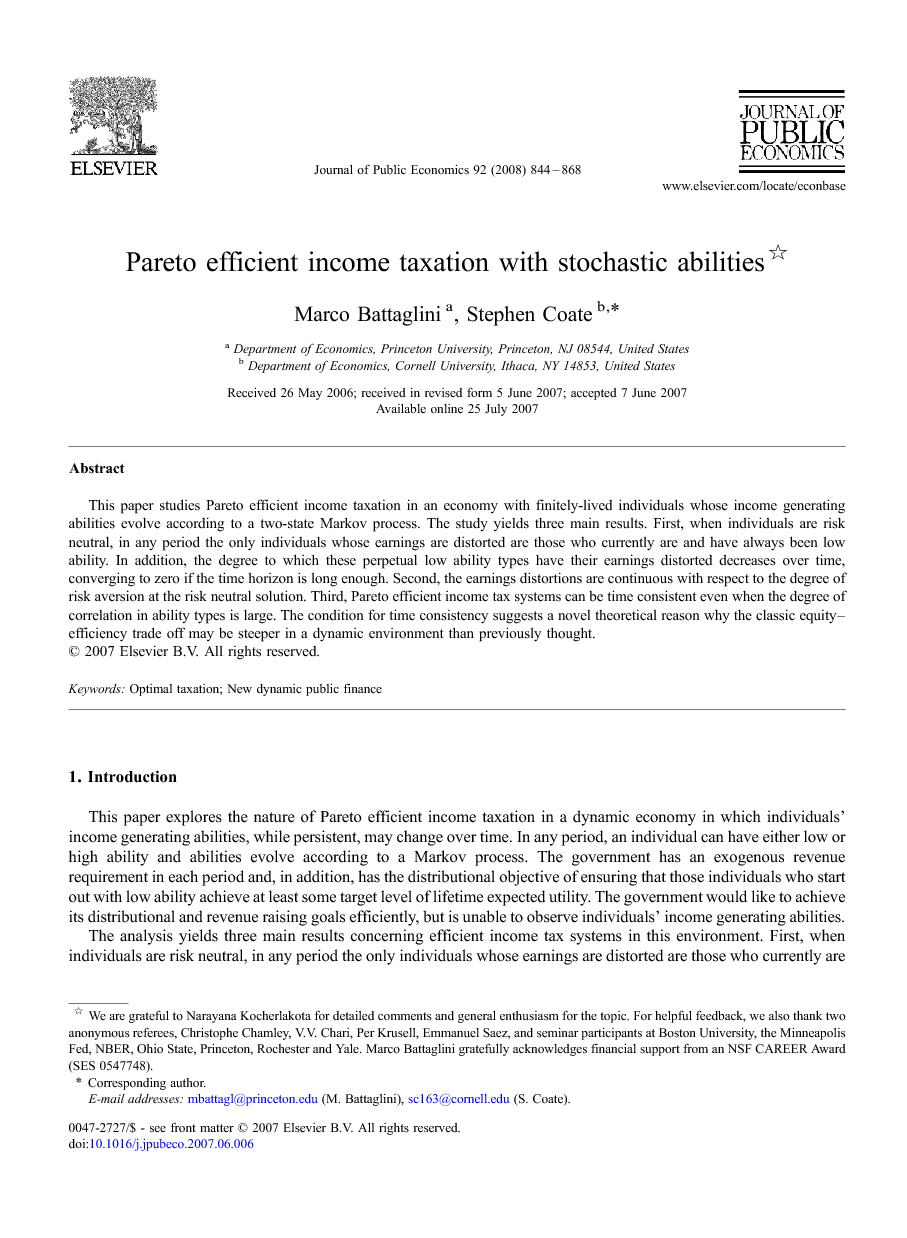 This paper studies Pareto efficient income taxation in an economy with finitely-lived individuals whose income generating abilities evolve according to a two-state Markov process. The study yields three main results. First, when individuals are risk neutral, in any period the only individuals whose earnings are distorted are those who currently are and have always been low ability. In addition, the degree to which these perpetual low ability types have their earnings distorted decreases over time, converging to zero if the time horizon is long enough. Second, the earnings distortions are continuous with respect to the degree of risk aversion at the risk neutral solution. Third, Pareto efficient income tax systems can be time consistent even when the degree of correlation in ability types is large. The condition for time consistency suggests a novel theoretical reason why the classic equity–efficiency trade off may be steeper in a dynamic environment than previously thought.

Recognizing that individuals' income generating abilities may vary over time significantly complicates the problem of optimal taxation. First, if individuals are risk averse, an additional insurance source of distortions is introduced along-side the redistributive source of distortions from the static model. Second, and relatedly, when individuals are risk averse there are additional margins for distortions. While in the static model the only margin to be distorted is the labor–leisure choice, in the dynamic model there are also distortions in the allocation of consumption across time and states. Third, optimal tax systems can be time inconsistent. In the static model, governments just set the tax-transfer system and individuals make their labor supply decisions. In the dynamic model, governments must announce the tax treatment of both current and future earnings. But once information has been revealed by individuals' current earnings choices, the government may wish to reoptimize its system making it time inconsistent. Given the complexity of the problem, the New Dynamic Public Finance literature is making progress in a piecemeal fashion, focusing on one or two aspects at a time. The contribution of this paper is to shed light on the nature of optimal policy when there are two ability types and the insurance source of distortions is absent or very limited. In this environment, the key issue is how to efficiently screen those who start out with high ability from those who are initially low ability. Our results concerning the pattern of earnings distortions show how this efficient screening plays out over time. They build naturally on the results from the static optimal income taxation literature. When individuals are risk averse and the insurance source of distortions is present, the pattern of earnings distortions will be more complex. However, our result that earnings distortions are continuous with respect to the degree of risk aversion at the risk neutral solution provides some guidance as to the nature of optimal policy at very low levels of risk aversion. Our results on time consistency also demonstrate that the incentive governments have to renege on efficient tax systems is mitigated by the potential variability of abilities.