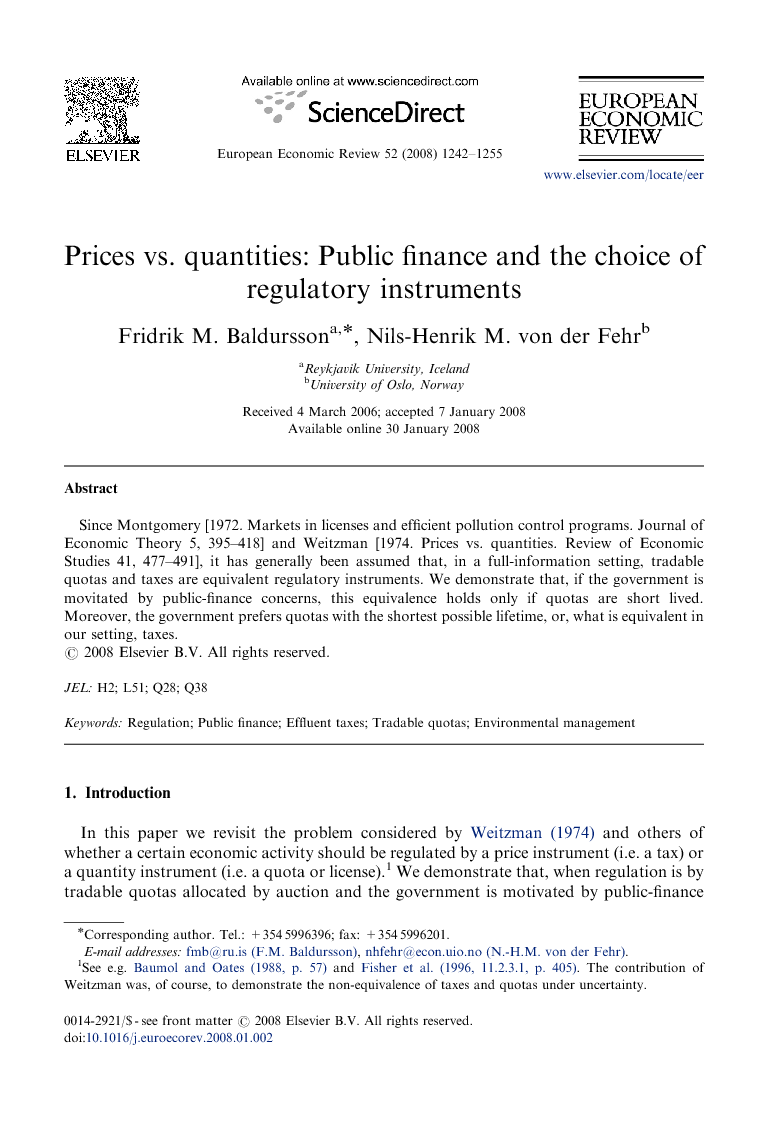 Since Montgomery [1972. Markets in licenses and efficient pollution control programs. Journal of Economic Theory 5, 395–418] and Weitzman [1974. Prices vs. quantities. Review of Economic Studies 41, 477–491], it has generally been assumed that, in a full-information setting, tradable quotas and taxes are equivalent regulatory instruments. We demonstrate that, if the government is movitated by public-finance concerns, this equivalence holds only if quotas are short lived. Moreover, the government prefers quotas with the shortest possible lifetime, or, what is equivalent in our setting, taxes.

Since Montgomery (1972) and Weitzman (1974), it has generally been assumed that, in a full-information setting, tradable quotas and taxes are equivalent regulatory instruments. We demonstrate that, unless the government is indifferent about revenues, the equivalence result holds only if the duration of quotas is no longer than one decision period. A government will choose quotas with the shortest duration possible. Longer-term quotas create an intertemporal ‘inconsistency’ problem, in the sense that the government would over time increase the number of quotas beyond the globally efficient level. When regulation is by taxes, no similar problem arises. This corresponds to the result that a monopolist would prefer to lease rather than to sell durable goods. In the literature on environmental regulation taxes and grandfathered quotas are often compared as alternatives and in that case taxes are obviously preferred from a public-finance perspective. The thrust of this paper is that even if quotas are auctioned under perfect information there remains a disadvantage which makes long-run quotas less attractive to policymakers. In our setup there are no costs related to shortening the duration of quotas. Clearly such costs may exist, for example related to the frequency of regulatory intervention. Longer-term quotas may reduce the need for costly transactions and provide better predictability about regulatory policy. Therefore, if public-finance considerations lead policy makers to shorten quota duration (or regulate by taxes) real costs are involved. This would be analogous to costs arising from planned obsolesence in durable-goods models where a producer may intentionally shorten the lifetime of goods in order to commit to higher future prices. We have cast our model in the setting of environmental regulation, but similar concerns would seem to arise in many other contexts. The crucial characteristics for the public-finance argument to arise are that the government regulates the overall level of economic activity and can choose the duration of rights to this activity. As pointed out in the Introduction such activities would include land use, exploitation of renewable natural resources and public transportation.