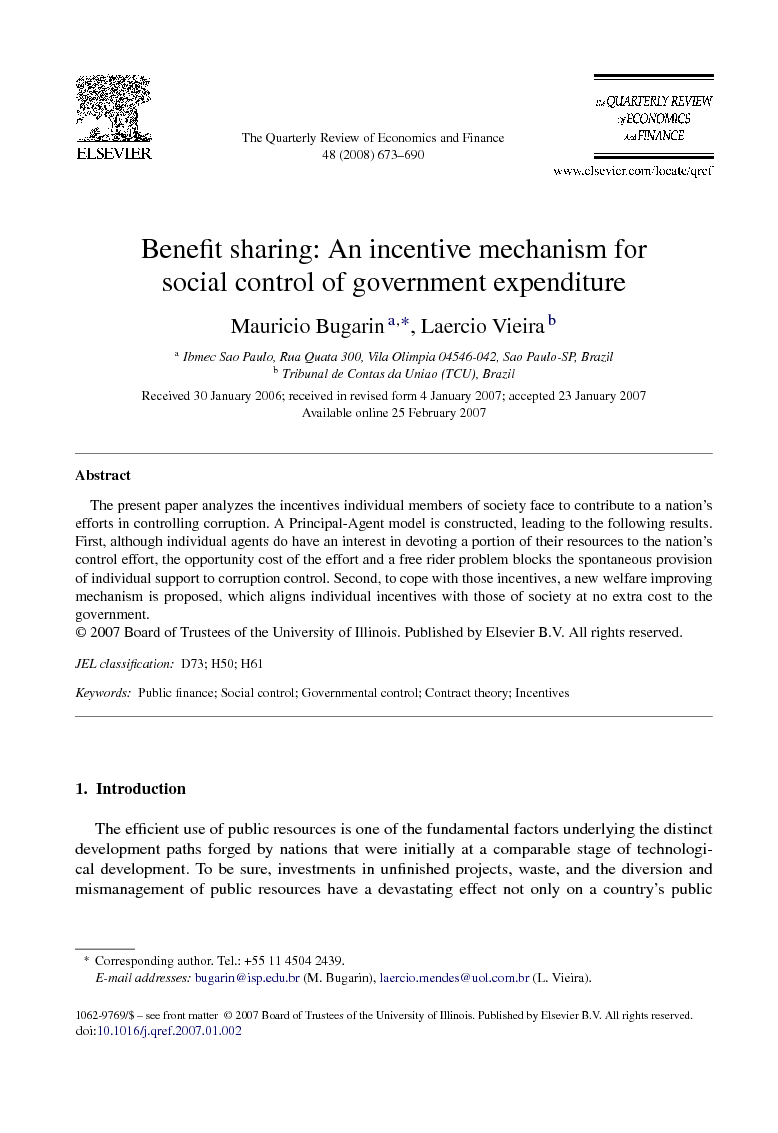 The present paper analyzes the incentives individual members of society face to contribute to a nation's efforts in controlling corruption. A Principal-Agent model is constructed, leading to the following results. First, although individual agents do have an interest in devoting a portion of their resources to the nation's control effort, the opportunity cost of the effort and a free rider problem blocks the spontaneous provision of individual support to corruption control. Second, to cope with those incentives, a new welfare improving mechanism is proposed, which aligns individual incentives with those of society at no extra cost to the government.

The efficient use of public resources is one of the fundamental factors underlying the distinct development paths forged by nations that were initially at a comparable stage of technological development. To be sure, investments in unfinished projects, waste, and the diversion and mismanagement of public resources have a devastating effect not only on a country's public accounts but also on its GDP growth rate.1Mauro (1995), for example, presents a 67-country econometric analysis, in which “corruption is found to lower investment, thereby lowering economic growth”. Similarly, Habib and Zurawicki (2002) provides an 89-country econometric analysis which concludes that corruption reduces foreign direct investment as well. A specific country study presented in Bugarin, Gomes and Ellery (2005) suggests that Brazil wasted approximately 20% of its gross capital accumulation in the last 5 decades of the 20th century. The high social cost associated with the inefficient use of public resources has driven societies around the world to assume a far more active role in controlling public resources and in demanding punishment of those individuals involved in corruption and the diversion of resources. To cite a landmark example, the impeachment of former Brazilian President Fernando Collor de Mello in 1992,2 which was only made possible by the significant pressure exerted by society,3 represented a milestone in the effort to raise social awareness in that country. Civil society's participation in detecting and monitoring the diversion of public resources is of great importance to a country. First, because it represents a form of civic action that fosters a spirit of national unity centered on the common good. Second, because it carries the potential of frightening corrupt individuals, who face the risk of punishment, and, in this way, deters them from engaging in illicit activities. Social involvement by average citizens, however, requires dedication and resources, and, moreover, it also competes with their everyday activities such as work and leisure. Given the cost of devoting oneself to social control, citizens have a natural tendency to delegate to the government the responsibility for controlling the Public Administration. Therefore, in the current context, it may be the case that the Federal Government is not taking advantage of the effort civil society might well be willing to invest in controlling the public administration, were it not for the high cost of this activity. The purpose of the present article is to study the incentives society faces with respect to its participation in the control of public expenditures, and to determine how this participation can be promoted. The second section sets forth the basic ideas of the proposed model. As a benchmark for future comparisons, Section 3 develops and solves the optimization problem of an agent who is unaware of his potential for participating in the collective control effort. The following section determines the optimal choice for an agent when he recognizes his role in the control process, although here he receives no government encouragement to become involved. This case highlights the fact that there are limited incentives for civil society to exercise a significant role, to the extent that a natural tendency exists for society to delegate all of the responsibility for control to the government bodies. Recognizing the reduced stimulus for spontaneous social involvement, Section 5 analyzes an alternative mechanism that induces civil society to invest its own resources in control without resulting in any additional cost to the State. Section 6 reviews the theory of Legislative oversight in the light of the proposed incentive mechanism. The following section compares that mechanism with others that are actually in use or have been proposed in order to avert behavior that will be harmful to society, and concludes that if incentives are set properly then individuals’ private effort can be used in large scale to control public expenditure. Finally, Section 8 concludes the study.

The formal analysis of the proposed mechanism highlights the government's strategic opportunity to induce civil society to engage into the social control process, and, in this way, reduce the diversion of public resources. It is an inexpensive mechanism for the government that does not result in the ex ante disbursement of any resources, since disbursement is restricted to those situations in which diverted resources are recovered. However, the implementation such a mechanism is clearly subject to a series of adjustments given the adverse incentives it may cause. In general, care should be taken each time the government decides to exercise its role as a principal to induce society into adopting a specific pattern of conduct. For purposes of the particular case considered in this study, some of the difficulties that must be resolved to ensure the mechanism's success need to be pointed out. First, the concept of the agent's “instrumentality” in recovering the resources must be made clear. Indeed, there is an unintended, although expected, adverse incentive created by the new mechanism: since there is a reward to exposing diverted public resources, agents may want to make irresponsible claims in order to get a “piece of the cake”.23 A mere accusation lacking solid substantiation should not, even if later borne out, be sufficient to guarantee access to the recovered resources. A pre-established level of minimum requirements with respect to evidence and other legal instruments should be required to avoid an avalanche of baseless accusations or false claims. That problem is shared by other similar mechanisms, such as the leniency programs for which a firm can only receive the benefit “if the [government authority] does not already have enough evidence to secure the conviction of the corporation or individual at the time the agreement is proposed.24” Second, law enforcement and the Judicial System must be prepared to impose the applicable penalties and execute the recovery of the diverted resources. It is essential that these institutions have considerable flexibility and act quickly in order to make sure that the share owed to the private agent is transferred to him, so that he feels genuinely stimulated to invest his time in social control.