عنوان انگلیسی
The taxman tools up: An event history study of the introduction of the personal income tax
دانلود فوری مقاله + سفارش ترجمه 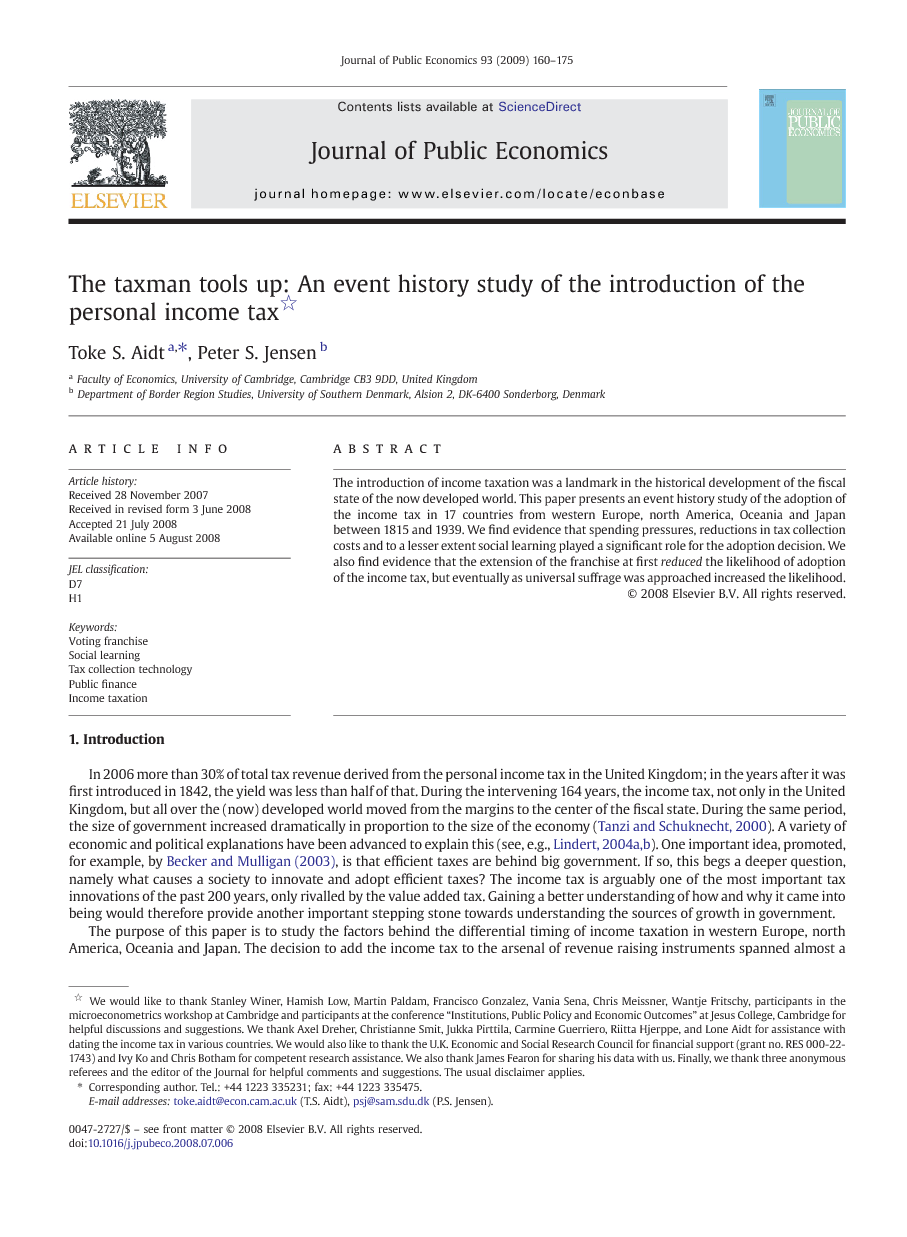 The introduction of income taxation was a landmark in the historical development of the fiscal state of the now developed world. This paper presents an event history study of the adoption of the income tax in 17 countries from western Europe, north America, Oceania and Japan between 1815 and 1939. We find evidence that spending pressures, reductions in tax collection costs and to a lesser extent social learning played a significant role for the adoption decision. We also find evidence that the extension of the franchise at first reduced the likelihood of adoption of the income tax, but eventually as universal suffrage was approached increased the likelihood.

The introduction of income taxation was one of the major events in fiscal history that contributed to the growth in government observed during the past 150 years. We have estimated the conditional probability that a country adopts the income tax for a sample of 17 countries from western Europe, north America, Oceania and Japan. We find evidence that reductions in tax collection costs, spending pressures and to a lesser extent social learning played a significant role for the adoption decision. Voting institutions were also important, but in surprising ways. We find evidence that the extension of the franchise at first reduces the likelihood of income taxation. But once the franchise surpasses a threshold (estimated to be around 63% of the adult population) the effect reverses and further extension of the franchise makes it more likely that income tax will be levied. The puzzling negative effect is unlikely to be caused by confusion between election year effects and franchise effects, by reverse causality or by rare events bias. We also find that reforms that allowed for more political competition reduced the likelihood of income taxation and that the introduction of the secret ballot made the income tax much more likely. In contrast, broader economic and demographic factors, such as aging, population pressures, economic growth and sectorial shifts, did not matter much. What can account for these effects? One interpretation is that suffrage reforms that allow more individuals to vote, yet keeping the privilege concentrated among a relatively narrow segment of the population, effectively discouraged any move to taxation of incomes because the new voters were the principle target for theses taxes. They would initially bear the lion's share of the cost without benefiting much from redistribution or more public spending. This interpretation is consistent with the fact that the franchise effect becomes positive once the suffrage is sufficiently broad: eventually the new voters do benefit from income taxation. In western Europe at least, this was complemented by another effect. The elites that extended the franchise accepted that the poor could vote, but at the same time they introduced new or enhanced old checks and balances that prevented or delayed large scale Robin Hood type redistribution. For example, it was common practice to have two legislative chambers and new legislation needed the approval of both chambers. By maintaining control over the upper chamber, while widening the franchise for the lower one, the elites effectively put constitutional constraints on the extent of redistribution. This may have delayed the income tax for two reasons. Firstly, it was less attractive as a tool of redistribution. Secondly, its value as a revenue raiser was reduced by the fact that spending programs favored by the newly enfranchised voters could be blocked. This may also explain why more competition for executive power made it more difficult to introduce new taxes. The broader literature on the drivers of the fiscal state also contains hints as to why suffrage and other institutional reforms towards democracy did not unambiguously add to the taxman's toolbox. Mulligan et al., 2002 and Mulligan et al., 2004 report that the effect of democracy on the scale and design of social security programs and on a number of other public policy outcomes is very limited and possibly negative in a large panel of 90 countries from 1960 to 1990. They interpret this as evidence in favor of institutional neutrality: it is economic and demographic changes that are driving fiscal choices, and the ways they affect these choices are invariant to voting institutions. A similar message comes from Ross (2006) who reports that democracy makes no difference for key social outcomes such as infant and child mortality rates. Our results do not support the hypothesis of institutional neutrality and the direct effect of broader economic and social factors do not seem to matter nearly as much in our context as they do later on in the 20th century. Nevertheless, our results on the role of suffrage reforms strongly suggest that the franchise reforms of the 19th and early 20th century had a much more complex impact on the fiscal state than suggested by theoretical reasoning in the tradition of Meltzer and Richard (1981). This interpretation is consistent with other available evidence for the period. Aidt et al. (2006) report that the franchise extension in western Europe did not lead to a large and immediate expansion of government spending, but shifted the portfolio of spending. This observation along with the evidence on the interaction between suffrage reform and tax collection technology reported in Aidt and Jensen (in press) supports the view that the value of income taxation as a revenue raiser might have been limited at the time of the first wave of franchise reforms. It was not until the appropriate tax collection technology had emerged and a sufficiently broad suffrage was established that democracy became a major driver of fiscal expansion and even then, it is possible that the broad differences between democracies and nondemocracies remain limited.