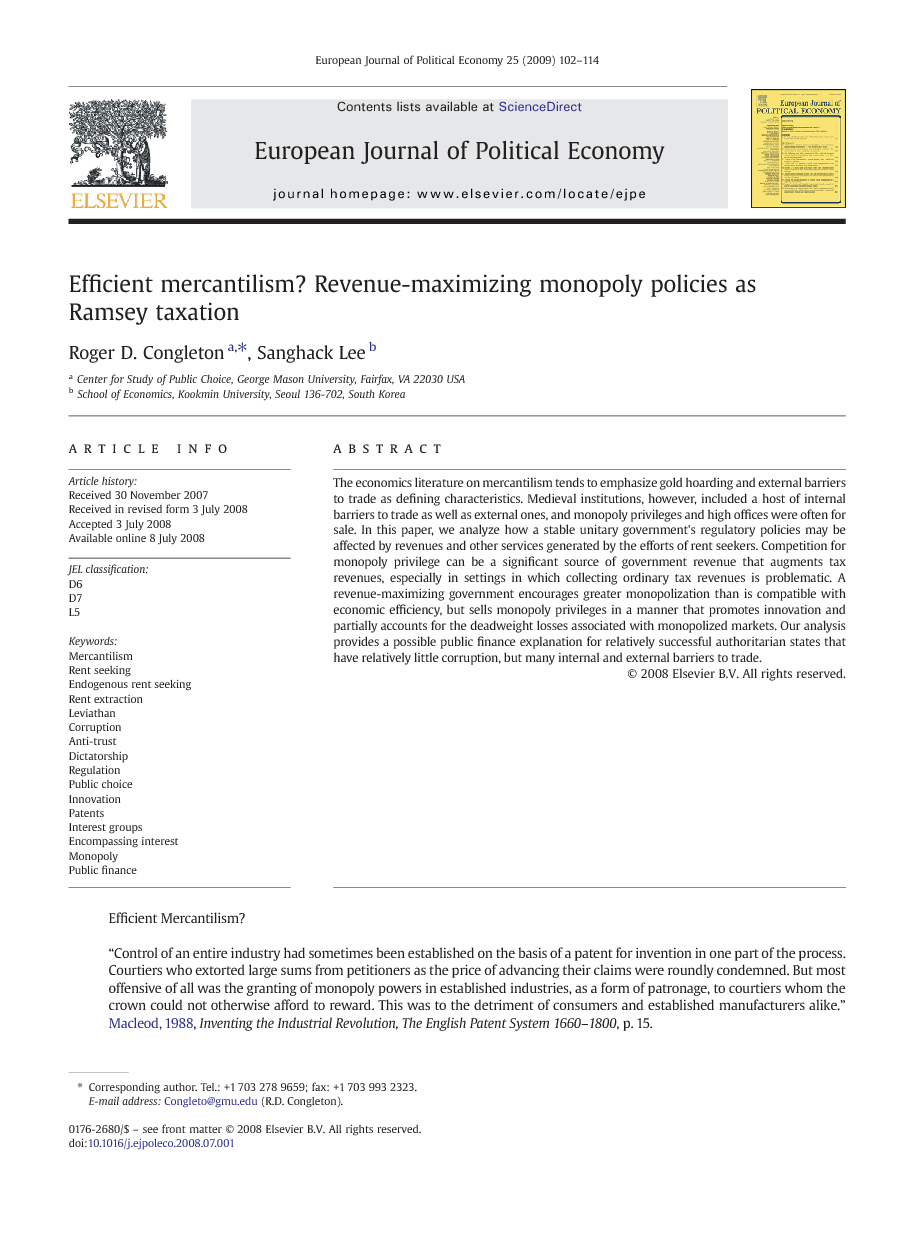 The economics literature on mercantilism tends to emphasize gold hoarding and external barriers to trade as defining characteristics. Medieval institutions, however, included a host of internal barriers to trade as well as external ones, and monopoly privileges and high offices were often for sale. In this paper, we analyze how a stable unitary government's regulatory policies may be affected by revenues and other services generated by the efforts of rent seekers. Competition for monopoly privilege can be a significant source of government revenue that augments tax revenues, especially in settings in which collecting ordinary tax revenues is problematic. A revenue-maximizing government encourages greater monopolization than is compatible with economic efficiency, but sells monopoly privileges in a manner that promotes innovation and partially accounts for the deadweight losses associated with monopolized markets. Our analysis provides a possible public finance explanation for relatively successful authoritarian states that have relatively little corruption, but many internal and external barriers to trade.

At least since Adam Smith, the classical and neoclassical approach to the analysis of monopoly has provided a consumer-welfare rationalization for vigorous antitrust policies in areas in which firms may coordinate their activities to achieve monopoly power. Apart from cases in which social welfare might conceivably be improved through a temporary grant of monopoly power to firms – as with patents and copyrights – most economists argue that governments should adopt policies that promote open markets and curtail, rather than increase, monopoly power.23 If the circumstances under which monopolization increases economic output are rare, it may be said that mainstream normative analysis neither supports nor explains the widespread use of governmental authority to create monopoly franchises and other formal barriers to entry. We do not disagree with the mainstream normative conclusion, but provide an alternative positive explanation for what is widely observed. The contemporary and historical record suggests that both monopolization and the sale of monopoly protection have long been significant sources of government revenue within a variety of institutional settings. Essentially all modern and ancient governments have used their power to create and sell “safe havens” from economic competition. In Europe and Japan, former state monopolies have been sold off in entirety to secure a higher price. On a smaller scale, in the United States, local governments have sold monopoly privileges to banks, cable TV providers, taxi cab, trash collection, and power companies. Other examples can be taken from history. Hamilton (1948), Ekelund and Tollison (1981), and Macleod (1988) report numerous examples of medieval rulers in England, France, Netherlands, Portugal, and Spain renting or selling monopoly privileges to raise money for government expenditures. In both Macleod's (1988) analysis of the early evolution of the British patent system and in Krueger's (1974) analysis of rent-seeking expenditures in contemporary Turkey and India, long-term investments to curry favor at court were often successful for individual rent seekers, but in aggregate cost far more than they were worth. That governments have long had revenue interests in monopoly profits is also suggested in Aristotle's discussion of monopoly. After telling the story of the Thalesian philosopher's success in monopolizing the market for olive presses (and thereby showing that scholars could be wealthy if they wished to be), Aristotle (1969/330 BC: ch. 11) notes that “The way to make money in business is to get, if you can, a monopoly for yourself. Hence we find governments also on certain occasions employ this method when they are short of money… we sometimes find that those who direct the affairs of state make this their entire policy” (italics added). Such a long-standing difference between economic theory and political practice is not likely to be caused by a failure to communicate sound economic advice to political leaders. We have demonstrated that incentives to create “economic safe havens” exist in settings in which a government profits directly (or indirectly) from competition among firms to be protected. An interest in such rent-seeking revenues – whether by a net revenue-maximizing leviathan or more moderate regimes – tends to induce governments to support monopolization levels that are above those that maximize national income or aggregate consumer surplus. Such policies, however, are not necessarily as bad as might be expected, because a net revenue-maximizing government has what Olson refers to as an encompassing interest. A well-informed and secure government's fiscal interests lead it to construct monopolization contests that encourage innovation and take account of deadweight losses from monopolization. The monopoly franchises sold by a secure well-run leviathan government have a Ramsey tax-like pattern in settings in which a good deal of reliable information exists about production costs and demand elasticities. Related public choice analysis suggests that the practice of enhancing government revenues by constructing monopolies is likely to be more evident in autocratic countries than in Western democracies. Political elites in such countries can prosper by inducing competition for rents in exchange for useful services (such as increased support or loyalty) for rulers as well as revenues for the treasury. Wintrobe (1998) argues that the purchase of government favors is a common characteristic of dictatorships. Developing countries also tend to have relatively ineffective tax-collection systems and so greater need for revenues from rent seeking contests. As corroboration of these predictions, indices of market openness suggest that competition-reducing policies are more common in Third World than developed countries, although it is not perfectly correlated with governmental type. Western democracies also have an interest in revenues, but their tax institutions are usually more effective and their majoritarian political institutions encourage politicians to take greater account of consumer interests. This does not imply that rent-seeking contests are never used as revenue sources in democracies, only that they are used relatively less frequently.24 Perhaps the most surprising of our results is that stable relatively well-organized states can rely extensively on monopolization for revenues, yet still be relatively prosperous measured in conventional ways — although their markets and citizens will be overmonopolized, overtaxed, and underserved by their governments.25 Auctions for monopoly privileges and other similar contests can be a relatively efficient source of revenue in settings in which “normal” tax instruments are relatively ineffective or politically difficult to increase and the government is in a good position to profit or receive useful services from those seeking monopoly privileges. The surprising government, from the perspective of our analysis, would be one that consistently discouraged all forms of monopolization.26