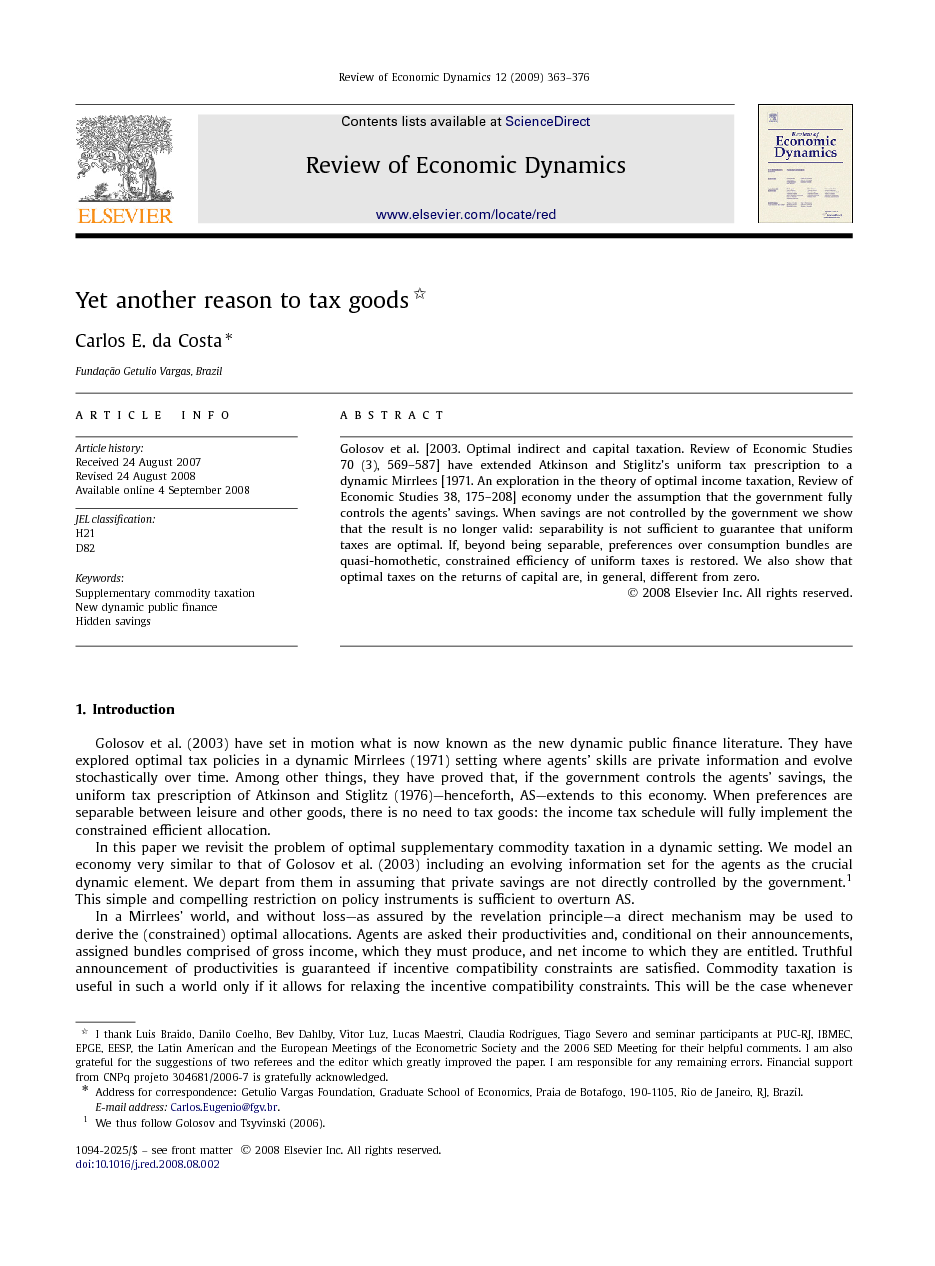 Golosov et al. [2003. Optimal indirect and capital taxation. Review of Economic Studies 70 (3), 569–587] have extended Atkinson and Stiglitz's uniform tax prescription to a dynamic Mirrlees [1971. An exploration in the theory of optimal income taxation, Review of Economic Studies 38, 175–208] economy under the assumption that the government fully controls the agents' savings. When savings are not controlled by the government we show that the result is no longer valid: separability is not sufficient to guarantee that uniform taxes are optimal. If, beyond being separable, preferences over consumption bundles are quasi-homothetic, constrained efficiency of uniform taxes is restored. We also show that optimal taxes on the returns of capital are, in general, different from zero.

Golosov et al. (2003) have set in motion what is now known as the new dynamic public finance literature. They have explored optimal tax policies in a dynamic Mirrlees (1971) setting where agents’ skills are private information and evolve stochastically over time. Among other things, they have proved that, if the government controls the agents’ savings, the uniform tax prescription of Atkinson and Stiglitz (1976)—henceforth, AS—extends to this economy. When preferences are separable between leisure and other goods, there is no need to tax goods: the income tax schedule will fully implement the constrained efficient allocation. In this paper we revisit the problem of optimal supplementary commodity taxation in a dynamic setting. We model an economy very similar to that of Golosov et al. (2003) including an evolving information set for the agents as the crucial dynamic element. We depart from them in assuming that private savings are not directly controlled by the government.1 This simple and compelling restriction on policy instruments is sufficient to overturn AS. In a Mirrlees’ world, and without loss—as assured by the revelation principle—a direct mechanism may be used to derive the (constrained) optimal allocations. Agents are asked their productivities and, conditional on their announcements, assigned bundles comprised of gross income, which they must produce, and net income to which they are entitled. Truthful announcement of productivities is guaranteed if incentive compatibility constraints are satisfied. Commodity taxation is useful in such a world only if it allows for relaxing the incentive compatibility constraints. This will be the case whenever the consumption pattern of an agent that announces to be of a certain type differs from that of the agent she claims to be. Consumption patterns would, in this case, signal that the agent is not telling the truth. By making demands, conditional on expenditures, independent of labor supply, separability between consumption and leisure rules out differences in choices for fibbers and abiders. Differential taxation is, in this case, useless. The uniform tax prescription survives in the dynamic setting of Golosov et al. (2003) precisely because, period by period, expenditures are equal to after tax income when the government controls savings. When the government does not control savings, however, expenditures need not equal after tax income. Therefore, agents that announce falsely need not have the same consumption pattern as the agents they impersonate. The subtlety here is that off-equilibrium announcement strategies imply different savings, hence, different expenditures conditional on the same after tax income. False announcement strategies will thus be accompanied by different consumption choices due to off-equilibrium savings. As in Atkinson and Stiglitz (1976), discouraging the consumption of goods that are relatively more demanded by those who lie helps relax incentive compatibility constraints. The only difference is that this change in consumption is now a result of different savings. Differential taxation of goods may still help separating those who announce truthfully from those who announce falsely. So far, we have not been specific about how off-equilibrium announcements affect savings. The point is that the violation of AS only depends on recognizing that choices do differ and not on how they differ. Tighter prescriptions require knowledge of which deviating strategies bind at the optimum and of the structure of the demands, which depends on the specific details of the model—preferences, distributions of shocks, etc. As for the taxation of savings, it is how off-equilibrium and equilibrium savings compare which determines whether savings ought to be taxed or subsidized. We present a simple example with only two productivity levels and ex-ante identical agents in which we show that: (i) the only relevant deviating strategy is that of always announcing to have low productivity, and; (ii) savings are always greater off-equilibrium than along the equilibrium path. Punishing deviant behavior is, as a consequence, accomplished by taxing savings. This example is interesting to isolate some of the forces at work but should not be taken as a general prescription of optimal taxation of savings. It is not always the case that savings are higher off the equilibrium path—e.g., see the very illuminating counterexample by Golosov and Tsyvinski (2006). The rest of the paper is organized as follows. The environment is explained in Section 2. Section 3 presents the planner’s problem in game form and discusses the relevant implementation concept to be used in our setting. All the results in the paper are presented in Section 4. Results of Section 4 are illustrated with numerical exercises in Section 5. Extensions, caveats and some clarifications are found in Section 6. Section 7 concludes the paper.

This paper combines and extends two recent important contributions to the dynamic optimal taxation literature—Golosov et al. (2003) and Golosov and Tsyvinski (2006). It extends the multi-good version of the former paper to consider unobservable savings and it extends the second paper by considering the multi-good setting. Two assumptions are crucial in our results: (i) productivity evolves stochastically, and; (ii) savings are not observed. It is the combination of these two characteristics that creates the dissociation of net income and expenditures for those who abide by the rules and those who deviate. Because productivity, which is private information, evolves stochastically, agents define strategies of contingent announcements. Associated with each different strategy is a different savings plan. Total expenditures along and off the equilibrium path, thus, differ even when we condition on the agent’s announcement. As a consequence, consumption will signal off equilibrium behavior even when preferences are separable between consumption and leisure. This is why the uniform tax prescription of Atkinson and Stiglitz (1976) is not valid in our setting. In our numerical examples, the quantitative gains of departing from uniform taxes were small. It is unclear whether these are, in any sense, indicative of potential gains from such reforms, in practice. Our condition for uniform taxes to be optimal, quasi-homothetic preferences, is the same one described by Deaton (1979) and Besley and Jewitt (1995) for the case in which the income tax schedule is restricted to be affine. An interesting question is how our quantitative results compare to the ones obtained when labor income taxes are thus restricted.10 Cremer et al. (2001) show that uniform taxation is usually not optimal in Mirrlees’ setup when multi-dimensional heterogeneity due to differences in the (non-observable) endowments of some goods is present. Income effects become important and, as in our case, AS does not obtain, without further assumptions on preferences. The similarity of our results and theirs is not accidental: there is a subtle way in which unobserved heterogeneity emerges in our framework. Agents off the equilibrium path have different ‘unobserved endowments’ when compared to agents who abide by the rules, since they save differently. Contrary to theirs, the heterogeneity in our model arises endogenously due to the combination of gradual learning of private information and non-observability of savings. We also show that the optimal tax on savings is generically different from zero. In a simple two period example with i.i.d. productivity shocks we are able to prove that savings are greater off-equilibrium than along the equilibrium path. This difference in savings between agents along and off the equilibrium path drives the optimal prescription for savings: the tax rate on savings is positive! This latter result should however be taken in with caution. Even though it is always the comparison between savings off and along the equilibrium path that ultimately determines the sign of optimal taxes on savings, it is not always the case that deviant behavior will lead to increased savings. First, the relevant deviant strategy may be that of announcing to be of higher productivity. Second, even when agents always deviate by underreporting their productivities, if shocks are not i.idifferences in their conditional distribution may lead those who deviate to save more those who abide by the rules.