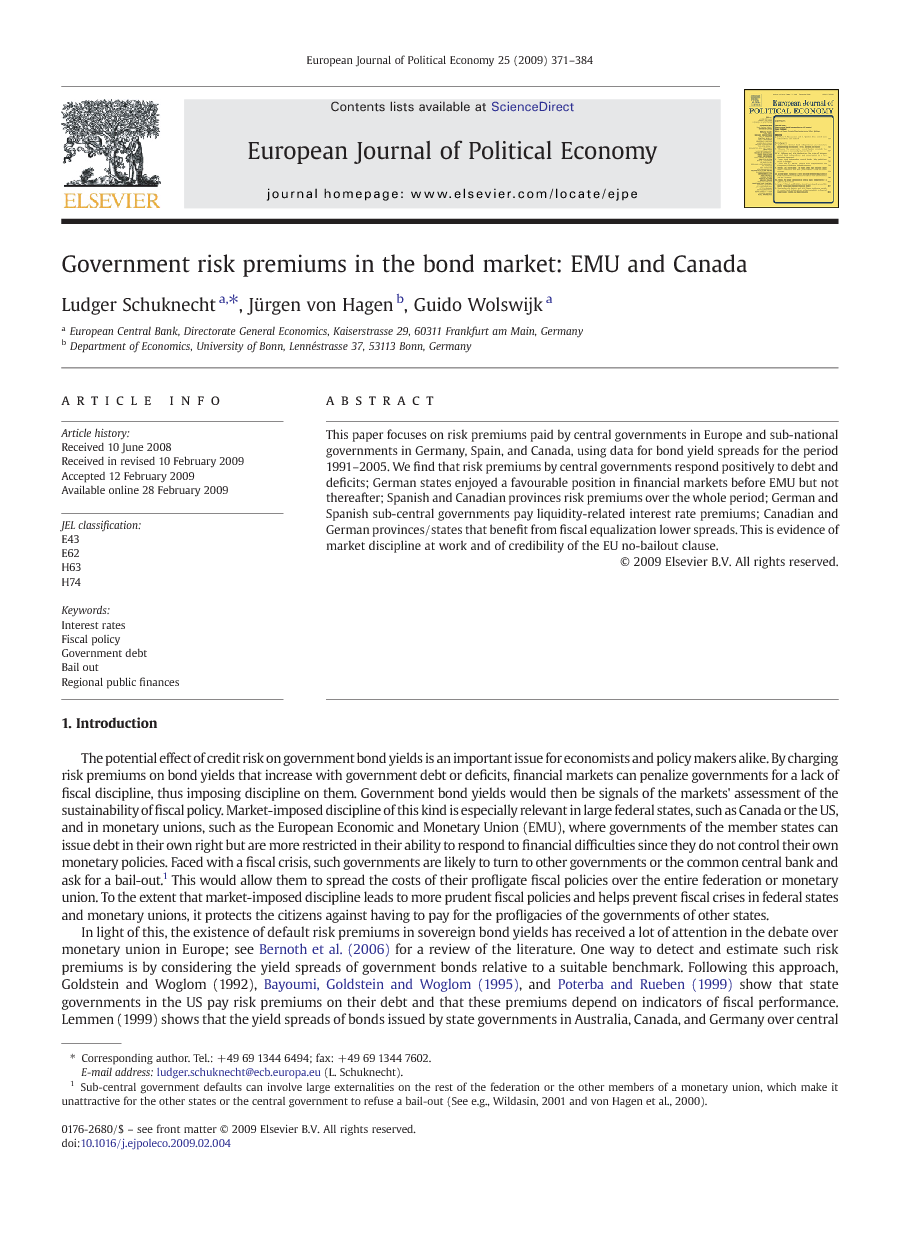 This paper extends recent empirical work on sovereign risk premiums in European bond markets to sub-national governments in Germany, Spain, and Canada. We find that yield spreads over appropriate benchmark bonds depend significantly on indicators of fiscal performance. This is consistent with the notion of sovereign risk premiums for (partial) defaults. We find such risk premiums both before and after the start of EMU, although their nature and magnitude has changed somewhat. In the context of a monetary union such as EMU, this form of market discipline complements the institutional provisions of the Stability and Growth Pact and thus reinforces the framework aiming at safeguarding sustainable public finances. German states enjoyed a particularly favourable position in the financial markets before EMU. Based on the investors' anticipation that the federal government would bail out financially troubled states, they did not pay risk premiums related to their fiscal deficits. The evidence suggests that this benefit accrued especially to states that usually receive transfers under the German fiscal equalization scheme. However, this special status has disappeared with EMU. Thus, monetary union has increased the market pressure for fiscal discipline on German states. We also consider the risk premium paid by Spanish provinces and find that they did not receive a similar, favourable treatment as German states before the start of EMU. Since then, markets treat them similarly to German states. These findings are also interesting from the perspective of fiscal institutions: The evidence presented in this paper supports the notion of credibility of the no-bailout clause in the EU Treaty while the bail out expectation for German states appears to have lost perceived importance. Pursuing our investigation into the effects of fiscal equalization on risk premiums paid by lower-level governments, we estimate similar models for Canadian provinces. Here, too, we find that the position of a provincial government in the fiscal equalization scheme makes a significant difference. Large Canadian provinces, which never receive equalization grants, are generally penalised for running large budget deficits. However, markets do not penalize provinces that consistently receive transfers under the Canadian fiscal equalization system for running large deficits. This suggests that markets expect the Canadian government to provide financial assistance to the governments of these provinces should a financial crisis occur, a result which is similar to our findings for German states before the start of EMU. The fact that large provinces have significantly lower debt levels than provinces receiving equalization grants provides prima-facie evidence that fiscal discipline as imposed by financial markets can be effective. Our results for Germany and Canada suggest that, beyond their principal function of reducing inequalities within a federation, fiscal equalization schemes affect the credit risk of sub-central governments and, therefore, allow recipient states to borrow at more favourable terms than others.