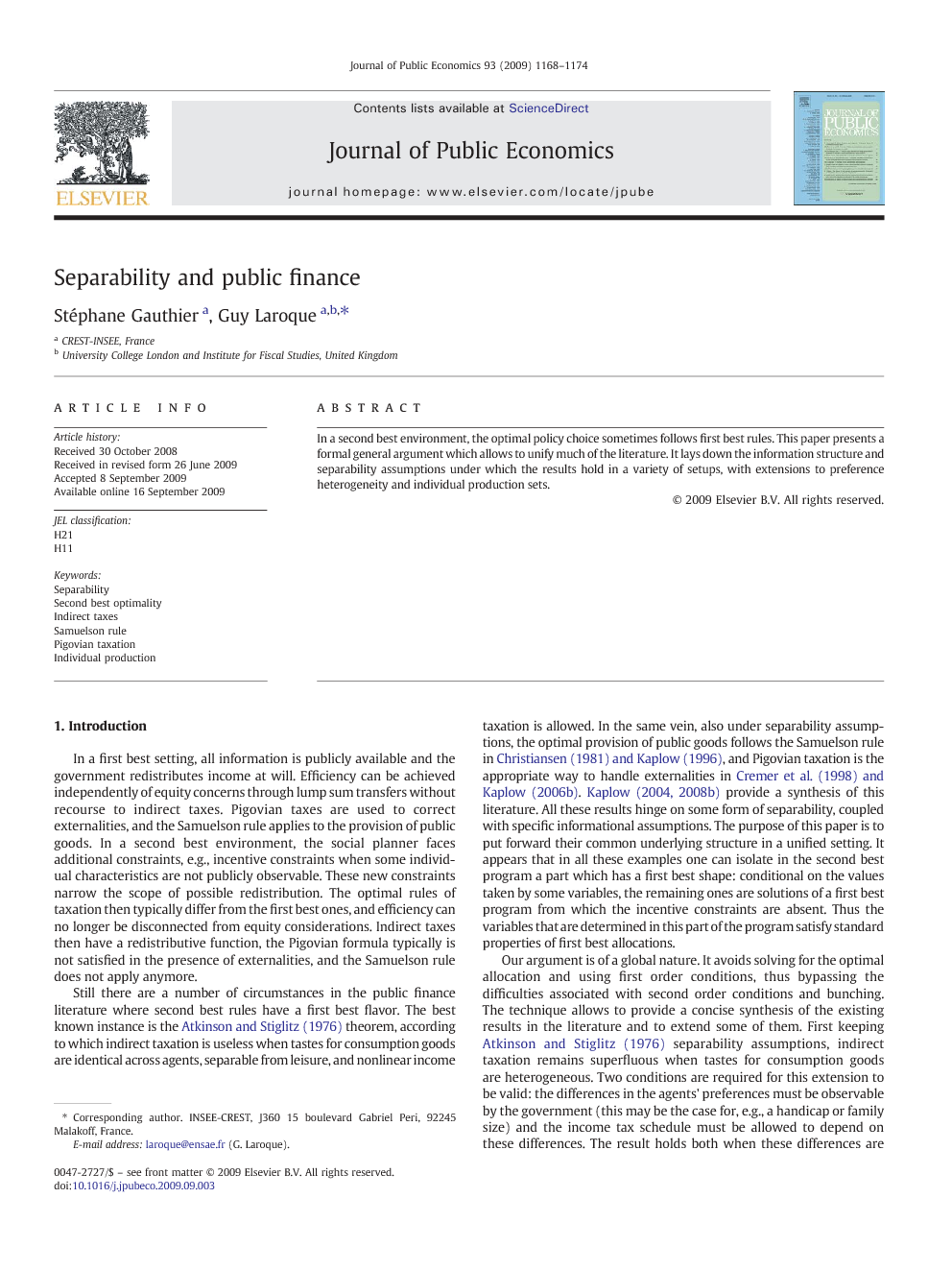 In a second best environment, the optimal policy choice sometimes follows first best rules. This paper presents a formal general argument which allows to unify much of the literature. It lays down the information structure and separability assumptions under which the results hold in a variety of setups, with extensions to preference heterogeneity and individual production sets.

In a first best setting, all information is publicly available and the government redistributes income at will. Efficiency can be achieved independently of equity concerns through lump sum transfers without recourse to indirect taxes. Pigovian taxes are used to correct externalities, and the Samuelson rule applies to the provision of public goods. In a second best environment, the social planner faces additional constraints, e.g., incentive constraints when some individual characteristics are not publicly observable. These new constraints narrow the scope of possible redistribution. The optimal rules of taxation then typically differ from the first best ones, and efficiency can no longer be disconnected from equity considerations. Indirect taxes then have a redistributive function, the Pigovian formula typically is not satisfied in the presence of externalities, and the Samuelson rule does not apply anymore. Still there are a number of circumstances in the public finance literature where second best rules have a first best flavor. The best known instance is the Atkinson and Stiglitz (1976) theorem, according to which indirect taxation is useless when tastes for consumption goods are identical across agents, separable from leisure, and nonlinear income taxation is allowed. In the same vein, also under separability assumptions, the optimal provision of public goods follows the Samuelson rule in Christiansen, 1981 and Kaplow, 1996, and Pigovian taxation is the appropriate way to handle externalities in Cremer et al., 1998 and Kaplow, 2006b. Kaplow, 2004 and Kaplow, 2008b provide a synthesis of this literature. All these results hinge on some form of separability, coupled with specific informational assumptions. The purpose of this paper is to put forward their common underlying structure in a unified setting. It appears that in all these examples one can isolate in the second best program a part which has a first best shape: conditional on the values taken by some variables, the remaining ones are solutions of a first best program from which the incentive constraints are absent. Thus the variables that are determined in this part of the program satisfy standard properties of first best allocations. Our argument is of a global nature. It avoids solving for the optimal allocation and using first order conditions, thus bypassing the difficulties associated with second order conditions and bunching. The technique allows to provide a concise synthesis of the existing results in the literature and to extend some of them. First keeping Atkinson and Stiglitz (1976) separability assumptions, indirect taxation remains superfluous when tastes for consumption goods are heterogeneous. Two conditions are required for this extension to be valid: the differences in the agents' preferences must be observable by the government (this may be the case for, e.g., a handicap or family size) and the income tax schedule must be allowed to depend on these differences. The result holds both when these differences are exogenously determined (handicap), as previously shown by Kaplow (2008a), or are the outcome of the agents endogenous choices (number of children). Second, we look more closely at the production side of the economy. The technology in Atkinson and Stiglitz (1976) is linear with fixed transformation rates between labor and the commodities, but the result actually holds in economies with a general aggregate constant returns production set, provided that wages are independent of aggregate consumption. We also consider economies with individual production sets which depend on the private ability of the entrepreneur. Under a separability assumption which makes input/output trade-offs in commodities separable from both labor and hidden characteristics, the choice of the (separable) input/output combinations should not be distorted by differential taxation. Suppose for instance that the quantity of labor required to produce one final good depends on another input, say education services, and on a private ability parameter. Under the (demanding) separability assumption the return on education (the increase in output which follows a marginal increase in education, holding labor input constant) is independent of the ability parameter. Then education should be provided competitively, with no subsidies neither to the teachers nor to the students, as in Bovenberg and Jacobs (2005). All redistribution takes place through a nonlinear income tax, which should only depend on incomes, not on the education levels of the workers, even if these levels are observable. The paper is organized as follows. The next section presents a regularity assumption that bears on the constrained allocations under study. Three different models are then examined in turn, dealing with indirect taxation, the provision of public goods and individual production.