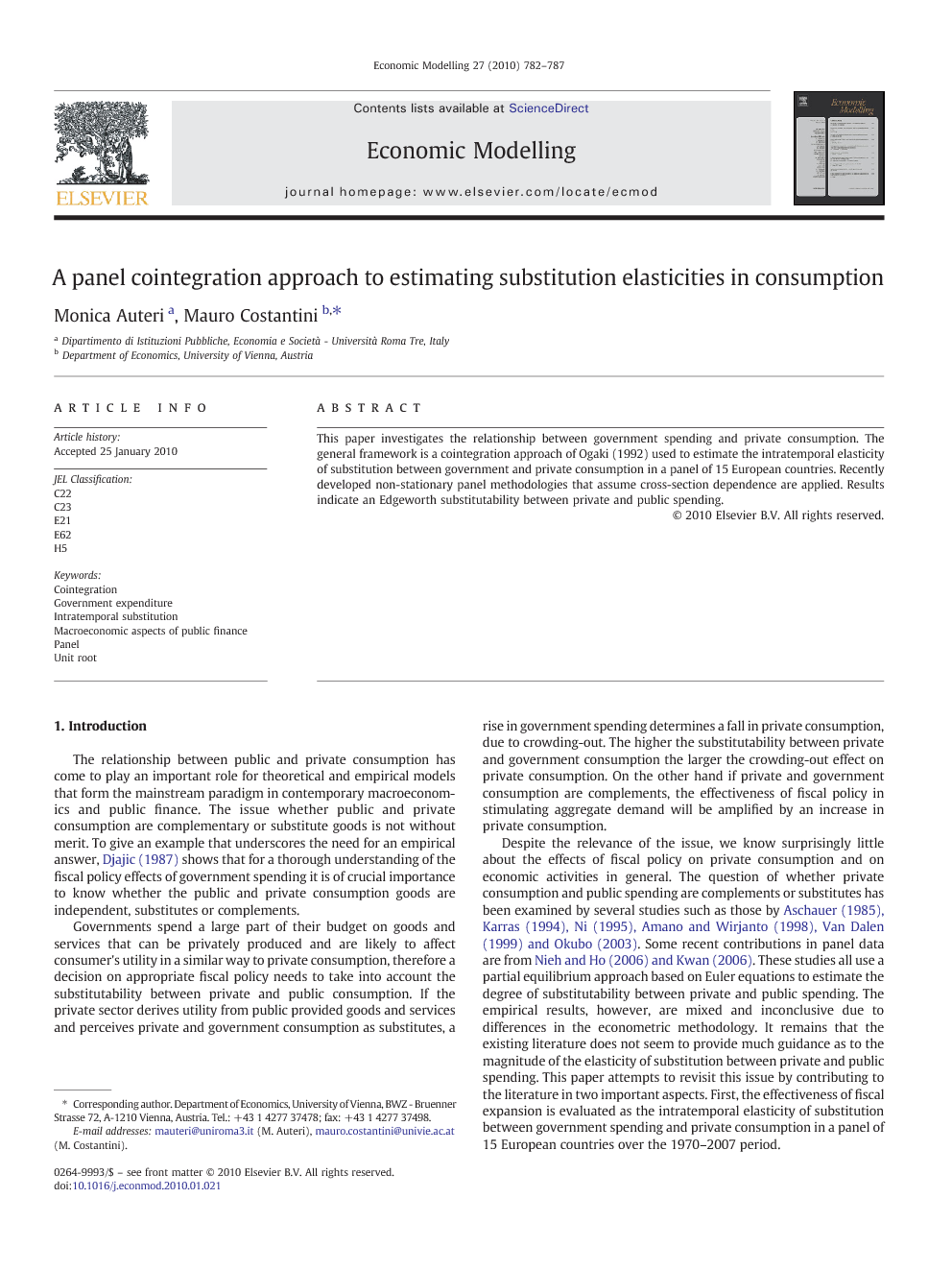 This paper investigates the relationship between government spending and private consumption. The general framework is a cointegration approach of Ogaki (1992) used to estimate the intratemporal elasticity of substitution between government and private consumption in a panel of 15 European countries. Recently developed non-stationary panel methodologies that assume cross-section dependence are applied. Results indicate an Edgeworth substitutability between private and public spending.

The relationship between public and private consumption has come to play an important role for theoretical and empirical models that form the mainstream paradigm in contemporary macroeconomics and public finance. The issue whether public and private consumption are complementary or substitute goods is not without merit. To give an example that underscores the need for an empirical answer, Djajic (1987) shows that for a thorough understanding of the fiscal policy effects of government spending it is of crucial importance to know whether the public and private consumption goods are independent, substitutes or complements. Governments spend a large part of their budget on goods and services that can be privately produced and are likely to affect consumer's utility in a similar way to private consumption, therefore a decision on appropriate fiscal policy needs to take into account the substitutability between private and public consumption. If the private sector derives utility from public provided goods and services and perceives private and government consumption as substitutes, a rise in government spending determines a fall in private consumption, due to crowding-out. The higher the substitutability between private and government consumption the larger the crowding-out effect on private consumption. On the other hand if private and government consumption are complements, the effectiveness of fiscal policy in stimulating aggregate demand will be amplified by an increase in private consumption. Despite the relevance of the issue, we know surprisingly little about the effects of fiscal policy on private consumption and on economic activities in general. The question of whether private consumption and public spending are complements or substitutes has been examined by several studies such as those by Aschauer, 1985, Karras, 1994, Ni, 1995, Amano & Wirjanto, 1998, Van Dalen, 1999 and Okubo, 2003. Some recent contributions in panel data are from Nieh & Ho, 2006 and Kwan, 2006. These studies all use a partial equilibrium approach based on Euler equations to estimate the degree of substitutability between private and public spending. The empirical results, however, are mixed and inconclusive due to differences in the econometric methodology. It remains that the existing literature does not seem to provide much guidance as to the magnitude of the elasticity of substitution between private and public spending. This paper attempts to revisit this issue by contributing to the literature in two important aspects. First, the effectiveness of fiscal expansion is evaluated as the intratemporal elasticity of substitution between government spending and private consumption in a panel of 15 European countries over the 1970–2007 period. In the current institutional setting, even if in the EU there is no single fiscal policy, “high degree of fiscal synchronization that exists within the EU [...] cannot be ignored without simultaneously incurring a cost in efficiency” (Prohl and Westerlund, 2009). Since fiscal policies tend to be relatively homogeneous and preference parameters are similar, there is a need of an approach that takes full account of the panel structure of the data. One of the most important attractions of panel data is the ability to pool the long-run information regarding the cointegration parameters. In this paper, we use a cointegration approach of Ogaki, 1992 and Ogaki & Park, 1997 to estimate the preference parameters that govern the relationship between government and private consumption. Cointegration is applied to exploit the long-run restriction imposed by the intraperiod first-order condition. This method can directly evaluate the intratemporal elasticity of substitution from the data that is shown to be robust to a number of economic factors. Second, we take into account cross-sectional dependence through factor models to mirror the behavior of fiscal authorities in the context of the EU Treaty, the setting up of the convergence criteria, and the Stability and Growth Pact, SGP. Within the EU framework, fiscal discipline is determinant for the implementation of the common monetary policy. The political and economic cohesion of monetary union requires fiscal support across regions and in EMU, and the existence of sound fiscal policies is seen as a necessary objective for individual countries to pursue.1 In this context there are possible cross-country dependencies that can be envisaged not only in the run-up to EMU but also, for example, via integrated financial markets.2 In addition, policy choices are often affected by neighboring countries via externalities among jurisdictions. An example of these externalities is the amount of public investments in infrastructures in a country, such as roads, airports and rail-tracks. The benefits of these investments spill over in neighboring countries, and therefore affect the level of investments in the latter countries. Other interdependencies that occur with geographically close countries are due to tax competition (countries compete with their neighbor in order to attract tax base since corporate taxes are more sensitive to those of closer countries) and to the tendency of citizens to evaluate the performances of their policy makers by comparing the same policy choices taken by the neighboring countries (the so called “yardstick” competition).3 The organization of the remainder of this paper is as follows. Section 2 lays out the model and the intratemporal cointegration relationship implied is derived and discussed. Section 3 describes the econometric methodology and presents results. Section 4 concludes.