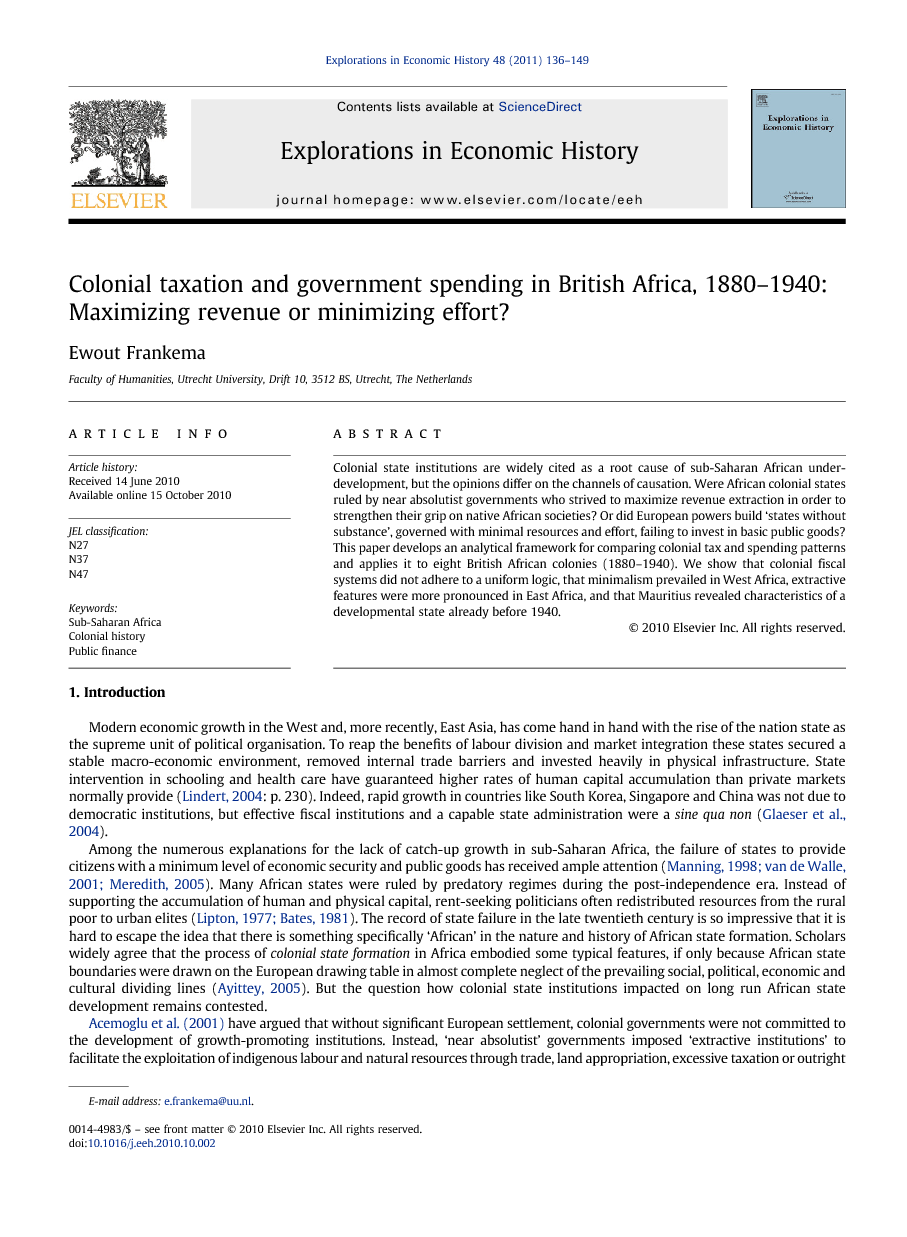 Colonial state institutions are widely cited as a root cause of sub-Saharan African underdevelopment, but the opinions differ on the channels of causation. Were African colonial states ruled by near absolutist governments who strived to maximize revenue extraction in order to strengthen their grip on native African societies? Or did European powers build ‘states without substance’, governed with minimal resources and effort, failing to invest in basic public goods? This paper develops an analytical framework for comparing colonial tax and spending patterns and applies it to eight British African colonies (1880–1940). We show that colonial fiscal systems did not adhere to a uniform logic, that minimalism prevailed in West Africa, extractive features were more pronounced in East Africa, and that Mauritius revealed characteristics of a developmental state already before 1940.

This study has shown that colonial tax and spending patterns did not follow a similar logic throughout British Africa. They differed largely, especially between East and West Africa. Colonial state finances combined minimalist and extractive features, but to varying degrees. Up to 1940 the West African states may qualify best as classical Night watchman states. Custom duties were the key source of fiscal revenue. The collection of custom duties was relatively easy, cheap and likely to keep state-society conflicts limited. The extractive features were more pronounced in East Africa where the constraints to revenue collection were higher than in West Africa. In Nyasaland, Uganda and Kenya a large part of the administrative expenditures were financed by regressive direct taxes on the indigenous population. Kenya appeared as the most extractive colony in our study, because the small group of European settlers benefitted disproportionally from limited public resources. In all British African colonies a steady rise in per capita revenues translated in higher budget shares reserved for health care and education. Total expenses on police, prisons and military forces remained more or less constant. Yet, although the colonial governments in West Africa did not face such tough budget constraints as in Nyasaland or Uganda, their resource-order ratio was not significantly higher. In the colonies where fiscal revenues were comparatively easy to obtain and expand, the colonial administration tended to behave in a minimalist fashion. Their continuous reliance on custom revenues went at the expense of revenue stability. In East Africa this strategy was impossible. Direct native taxes were indispensible for the financial development of the colonial state. The extremely low sums of per capita expenditure before 1914 were not so much the result of minimalist intentions, but rather of the great practical and economic constraints to revenue generation. After WWI the relative shares spent on human resources tended to catch-up with West Africa. Public finances of Mauritius contrasted with the rest of British Africa in several aspects. Although Mauritius was evidently richer in terms of per capita income and government purchasing power, the colonial government of Mauritius strengthened its grip on colonial state finances by reducing commodity export dependence, expanding the state bureaucracy and maintaining high tax levels throughout the period under study. Whereas the Gold Coast government refused to impose direct taxes and kept relying on custom duties for 80% of gross public revenue, the Mauritian government diversified its tax base. But spending patterns were fundamentally different as well. None of the mainland colonies could match the system of public education that had been developed in Mauritius on the basis of tax money. During and after the Second World War II things changed rapidly, however. School enrolment rates started to rise spectacularly across British Africa and, contrary to the pre-1940 era, colonial governments became the major driving force. Grants-in-aid from Britain financed a substantial part of this catch-up movement. With the benefit of hindsight we can conclude that the British attempt to restore or maintain the loyalty of its overseas subjects came too late to confine the call for independence. But grants-in-aid also reduced the incentives to reform colonial fiscal systems. In the long term this element of the colonial institutional heritage proved much more difficult to overcome than colonial rule itself.