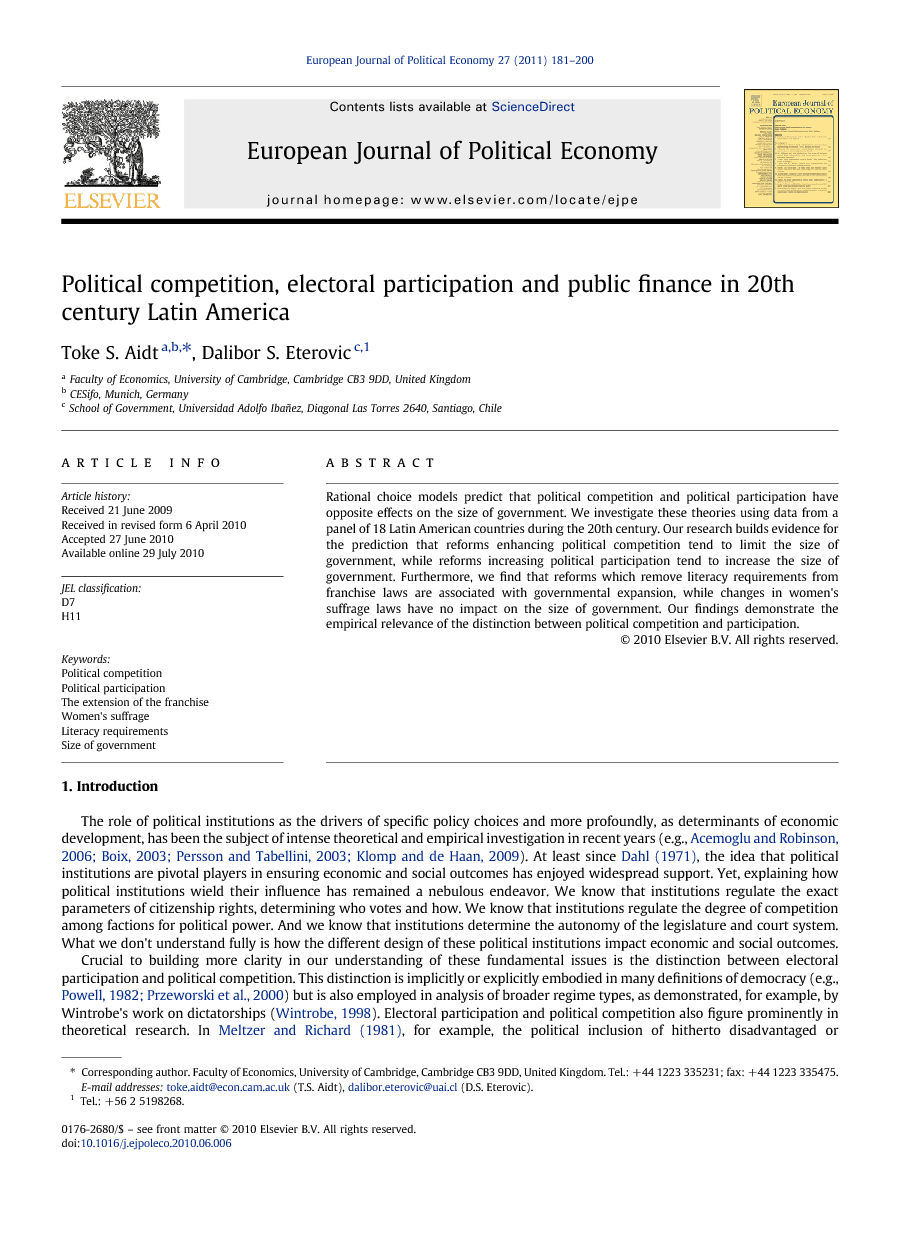 Our analysis demonstrates the empirical relevance of the distinction between political competition and electoral participation for the size of government. This finding has implications, not only for our understanding of the forces behind growth in government, but also more broadly for quantitative research on political institutions. Firstly, while in many contexts and for many research questions it may make sense to construct composite indicators of democracy that combine aspects of participation with aspects of competition (Przeworski et al., 2000, Vanhanen, 2000 and Boix, 2003), one should not overlook the fact that this may conceal important insights because the constituent components can have offsetting effects. As pointed out by Persson and Tabellini (2006), the devil may well be in the details. Secondly, recent research within the political economics literature (e.g., Mulligan et al., 2004 and Rodrik & Wacziarg, 2004) tends to interpret the Polity IV index as an index of democracy or changes in the index as a measure of democratization. We have argued that the index is better interpreted as an index of political competition. Political competition is surely one aspect of democracy, but most definitions would also refer to some notion of electoral participation (e.g., universal suffrage) and civil liberties; surely there is more to democracy than political competition. In short, the main contribution of this paper lies in using a two-dimensional metric to characterize political regimes and in establishing a very robust set of relationships between political competition and electoral participation, on the one hand, and fiscal outcomes, on the other, that go in opposite directions. Even if one questions whether our results are causal, they continue to be of substantial interest, for as Acemoglu (2005) notes, “even non-causal robust relationships are rare in comparative political economy”. But are the results casual? This is the ultimate challenge for all empirical research on the link between political institutions and fiscal outcomes. In order to identify a causal effect running from institutions to fiscal outcomes, the observed variation in the institutional arrangements must be exogenous to the process that determines the fiscal outcomes. In practise, this often fails. One possible reason is that political reforms might be driven by the same unobserved factors that determine fiscal choices. Another reason is reverse causality: Political reforms could be driven by fiscal considerations.36 In our context, such problems might arise if, for example, as argued by Acemoglu et al. (2005), the ruling elite did what it could to constrain electoral participation and to limit political competition in order to avoid income redistribution thought the fiscal state. If so, the de facto power of the elite, which is unobserved, would be negatively correlated with political competition, electoral participation and with the size of government. The implication of this would be that our estimate of the effect of political competition is biased towards zero while our estimate of the effect electoral participation is biased upwards away from zero. We have adopted a number of empirical strategies to minimize the likelihood of such biases. Firstly, in all our regressions, we control for country and year fixed effects. This rules out that our inference is contaminated by unobserved determinants that are constant over time (country fixed effects) or affect all countries at a given point in time in the same way (year fixed effects). This reduces, but does not eliminate, the risk of omitted variable bias. In particular, omitted variables that vary over time within a country and which are correlated with our two political variables and with the size of government pose a problem. The best defense against this problem is to control for the “right” set of time-varying observable factors (Acemoglu, 2005). Compared to many other panel studies, we control for a relatively large number of both economic and demographic factors. For example, we can interpret the variable Income equality as a proxy for the de facto power of the elite: The more equal a society is, the less power does the elite wield over the middle class. Controlling for this variable, therefore, goes a long way in eliminating the problem of omitted variable bias alluded to above. Secondly, to address the problem of reverse causality, we have run, as discussed in Section 3.3.3, a set of regressions with our political variables lagged 3, 5 and 7 years obtaining similar results to those reported in Table 2. All in all, we find it unlikely that our results are spurious and caused by omitted variables or reverse causality.