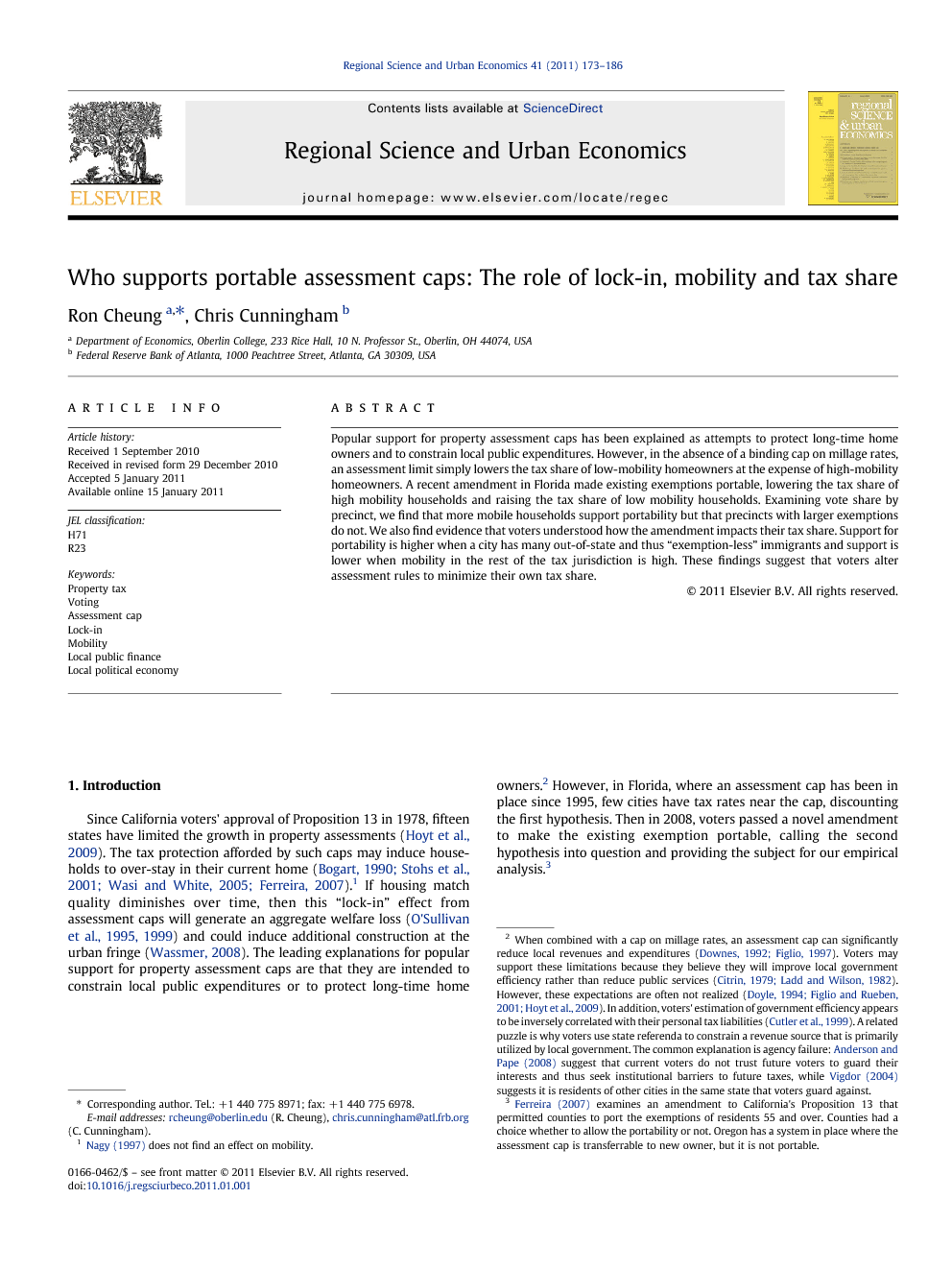 Popular support for property assessment caps has been explained as attempts to protect long-time home owners and to constrain local public expenditures. However, in the absence of a binding cap on millage rates, an assessment limit simply lowers the tax share of low-mobility homeowners at the expense of high-mobility homeowners. A recent amendment in Florida made existing exemptions portable, lowering the tax share of high mobility households and raising the tax share of low mobility households. Examining vote share by precinct, we find that more mobile households support portability but that precincts with larger exemptions do not. We also find evidence that voters understood how the amendment impacts their tax share. Support for portability is higher when a city has many out-of-state and thus “exemption-less” immigrants and support is lower when mobility in the rest of the tax jurisdiction is high. These findings suggest that voters alter assessment rules to minimize their own tax share.

Since California voters' approval of Proposition 13 in 1978, fifteen states have limited the growth in property assessments (Hoyt et al., 2009). The tax protection afforded by such caps may induce households to over-stay in their current home (Bogart, 1990, Stohs et al., 2001, Wasi and White, 2005 and Ferreira, 2007).1 If housing match quality diminishes over time, then this “lock-in” effect from assessment caps will generate an aggregate welfare loss (O'Sullivan et al., 1995 and O'Sullivan et al., 1999) and could induce additional construction at the urban fringe (Wassmer, 2008). The leading explanations for popular support for property assessment caps are that they are intended to constrain local public expenditures or to protect long-time home owners.2 However, in Florida, where an assessment cap has been in place since 1995, few cities have tax rates near the cap, discounting the first hypothesis. Then in 2008, voters passed a novel amendment to make the existing exemption portable, calling the second hypothesis into question and providing the subject for our empirical analysis.3 By treating newly purchased homes in the same way as currently owned homes, the amendment ameliorates the lock-in effect but at the expense of administrative complexity, greater horizontal inequity between recent and longtime homeowners and a faster erosion of the property tax base. While the original assessment cap passed with popular support, there was even greater support for the mobility-enhancing amendment. The portability provision is unusual because it impacts not only a household's current and future property tax liability and thus the finances of its current city, but also the assessed value of any city the household may move to in the future. Formerly, cities were able to rely on a certain amount of turnover in the market to reset the tax base back to market prices; now the base will only be restored when a first-time or out-of-state homebuyer makes a purchase. In addition, in-state migrants from other parts of Florida can erode the local tax base faster if they port large exemptions into districts that have not experienced much appreciation. Thus, after the portability amendment, local governments must reduce their expenditures, raise other taxes or fees, tax non-protected property, or raise the millage rate, which was almost never constrained.4 Rational voters thus had to balance their potential tax savings after a move against potentially higher immediate taxes or fewer public goods. To explain support for the portability amendment, we combine statewide assessor property records with precinct level election data and 2000 census block group data. We predict the share of yes votes based on the mobility rate and the existing tax savings (the “tax wedge”) from the existing assessment cap, controlling for average demographic characteristics, mean income and partisanship. Despite amendment supporters' claims that it would result in a tax reduction for owner-occupied property, we do not find higher support for the measure in precincts with a greater share of homesteaded property. Nor was support explained by the average size of a homeowner's current tax exemption, even though an existing exemption is a necessary condition for lock-in to occur. Instead, we find that precincts with more mobile households, and ones more mobile relative to other households in the same tax jurisdiction, were more likely to support portability. In addition, when examining inter-tax district migration, support increases when a jurisdiction has high rates of in-migration from other states but decreases with high rates of in-state migrants. These findings are consistent with voters understanding the mechanics of how portability affects their property tax shares. We believe that voters' behavior was motivated less by immediate tax savings and more by an attempt to shift the burden of financing government back to low-mobility households and especially to new homeowners in Florida. Section 2 details the original Save Our Homes exemption and the proposed portability amendment. Section 3 lays out the theoretical framework. In Section 4, we describe the econometric specification and the dataset, and we explain how we construct our independent variables of interest. Section 5 presents the initial results for the effect of mobility and wedge on support for portability. Section 6 looks for more sophisticated voter behavior by introducing a measure of relative mobility within the city and decomposing types of in-migration. There is a brief conclusion.

While many states have introduced property assessment caps, Florida's Amendment 1 is the first law to allow all owners to port their exempted value. This policy shift may significantly improve the mobility of homeowners and increase the efficient matching of homeowners to homes, but at the expense of further horizontal inequity. It is also hard to reconcile the strong support for both the original cap and the portability amendment with a desire to reward low or high mobility residence. Also, we find only weak evidence that voters were attempting to constrain local expenditures, though these specifications are at best an indirect test. We explore voter support for portability by regressing precinct-level voting data from the portability referendum on the assessment wedge formed by the difference between the just value and the assessed value of a house and various measures of household mobility, socioeconomic, geographic and political variables. We find evidence that voters with ex ante high mobility were more likely to support the portability amendment but the size of the existing wedge was not an important determinant. We also found that support was higher in tax districts whose in-migrants were “wedge-less” and support was lower when the mobility rate in the rest of the tax district was higher. However, support was affected by the share of non-homestead properties, perhaps because these properties were already taxed at the revenue maximizing rate. Our results are more consistent with voters attempting to lower their tax share at the expense of future Florida home owners.