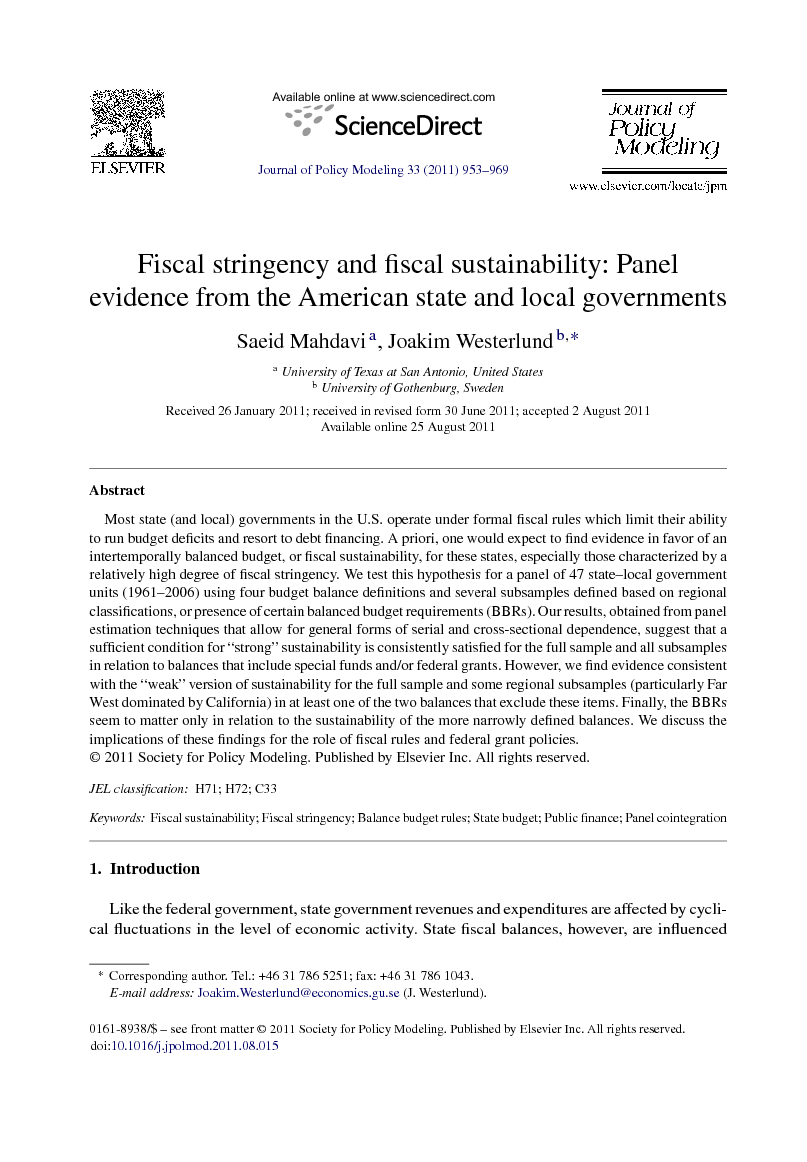 Most state (and local) governments in the U.S. operate under formal fiscal rules which limit their ability to run budget deficits and resort to debt financing. A priori, one would expect to find evidence in favor of an intertemporally balanced budget, or fiscal sustainability, for these states, especially those characterized by a relatively high degree of fiscal stringency. We test this hypothesis for a panel of 47 state–local government units (1961–2006) using four budget balance definitions and several subsamples defined based on regional classifications, or presence of certain balanced budget requirements (BBRs). Our results, obtained from panel estimation techniques that allow for general forms of serial and cross-sectional dependence, suggest that a sufficient condition for “strong” sustainability is consistently satisfied for the full sample and all subsamples in relation to balances that include special funds and/or federal grants. However, we find evidence consistent with the “weak” version of sustainability for the full sample and some regional subsamples (particularly Far West dominated by California) in at least one of the two balances that exclude these items. Finally, the BBRs seem to matter only in relation to the sustainability of the more narrowly defined balances. We discuss the implications of these findings for the role of fiscal rules and federal grant policies.

Like the federal government, state government revenues and expenditures are affected by cyclical fluctuations in the level of economic activity. State fiscal balances, however, are influenced by two additional factors: federal (unfunded) spending mandates and (statutory or constitutional) balanced budget requirements/rules/provisions (BBRs) and debt limits under which most states formally operate. Thus, while revenue losses and/or expenditure increases during economic downturns may lead to large state budget deficits in the short term, BBRs will presumably force subsequent fiscal adjustments to restore fiscal balance in the long term. If so, then the state budget is expected to be intertemporally balanced, or sustainable. Our review of the literature identifies two major strands of research on this subject. The first strand builds on a study conducted by the US Advisory Commission on Intergovernmental Relations, or ACIR (1987). A common objective of the studies of this strand (see, for example, Bohn and Inman, 1996 and Poterba, 1994) is to determine whether BBRs affect state deficits. Their results suggest that fiscal adjustments in the form of tax increases and/or spending cuts tend to be larger or quicker and debt measures lower in states with relatively stringent anti-deficit rules; especially where a no-deficit-carryover rule is accompanied by debt limit. More recently, Hou and Smith (2010) present evidence indicating that relatively straightforward and rigid “technical provisions” are more effective in curbing state spending and deficits than “political provisions.” The second research strand focuses on deriving the conditions for fiscal sustainability within an intertemporal budget constraint (IBC) framework and testing them by examining the unit root and/or cointegration properties of fiscal variables. Almost all U.S. studies in this strand use time series data at the federal government level (see, for example, Martin, 2000 and Quintos, 1995 and studies cited therein). With a few exceptions, their results support fiscal sustainability.1 In this paper, we extend the literature by synthesizing some aspects of the two strands of research reviewed above to provide answers to two major research questions: (a) have state and local government (SLG) revenue and expenditure variables behaved in a way that satisfies a sufficient condition for fiscal sustainability, and (b) has the evidence in favor of fiscal sustainability been more pronounced in states that are characterized by a relatively high degree of fiscal stringency? Our sample consists of a panel of 47 SLG units over the period 1961–2006. To the best of our knowledge, this is the first panel study that investigates the question of fiscal sustainability and explores its link to fiscal stringency at the U.S. subnational level. Several features of our empirical analysis are worth noting. Firstly, we use panel data to address the problem of the poor precision of statistical tests common to many previous time series studies of sustainability. Secondly, we employ some recently developed panel cointegration estimation techniques that allow for serial and cross-sectional dependence, as well as ample heterogeneity among SLG units. This is crucial to drawing correct statistical inferences because, for example, state economies may experience common shocks that would affect SLG fiscal condition. Thirdly, we examine the sensitivity of our results to regional variations, alternative fiscal balance definitions and different anti-deficit rules in place. The unprecedented fiscal stress SLGs have experienced since the onset of the “Great Repression” in the 2007 has been accompanied by a heightened level of public concern about the fiscal health of these governments. Our results may shed light on the ability of SLG to bring fiscal deficits under control in the long term by looking at their pre-recession performance. The results can also be informative as to whether fiscal institutions in the form of BBRs matter in achieving fiscal sustainability. The rest of this paper proceeds as follows. Section 2 presents an outline of the IBC framework for testing fiscal sustainability. Section 3 briefly discusses components of BBRs. Section 4 describes the data and empirical methodology. Section 5 discusses the results. The final section summarizes the main findings and discusses their implications.

We explored the question of fiscal sustainability and its link to the presence of BBRs in a panel of 47 SLGs over the period 1961–2006. Our main findings based on appropriate panel estimation techniques may be summarized as follow: First, a sufficient condition for “strong” sustainability was consistently satisfied for the full sample and regional subsamples in relation to “broader” fiscal balances that included “total” and “general” revenue and expenditure measures and less so in the case of “narrower” balances that paired “general revenues” with “current total expenditures” and “own-source general revenues” with “current operation expenditures.” Second, the Mideast, Great Lakes and Far West were regions that showed evidence of “weak” sustainability in at least one narrowly defined fiscal balance. Third, fiscal institutions in the form of presence of some technical BBRs were found to matter only in relation to the relatively narrowly defined balances where they are perceived to be most relevant. What are the implications of these results for the fiscal condition of SLGs in the future? Fiscal sustainability by definition is a long-term condition and evidence in favor it is not inconsistent with the existence of even unusually large fiscal deficits in the short term. An optimistic interpretation of our findings would, therefore, emphasize rather favorable evidence for the more inclusive balances and that their sustainability seems to be independent of presence of BBRs. Accordingly, large SLG deficits since the onset of the “Great Recession” in late 2007 (as those associated with previous economic downturns) should not necessarily be a cause for alarm; unless it turns out that the shocks have permanently shifted the paths of SLG revenues and expenditures and put their deficits on an unsustainable trajectory. A more pessimistic, and perhaps realistic, take on the results would note that the broader balances are susceptible to fluctuations in special (insurance trust) fund balances and federal grants. Thus, it is a distinct possibility that demographic changes and cost increases that have substantially raised retirement and health related expenditures and/or changes in the federal government grant policies put SLGs in a situation portrayed by narrower balances in the near future (GAO, 2008). Unfortunately, this looming problem does not lend itself to easy solutions. We presented prima facie evidence that the presence of some BBRs, especially those in the form of controls on re-budgeting and no-deficit-carryover, may help the sustainability of narrower balances. There is, therefore, a case to be made for SLGs to institute new rules and tighten and/or better enforce the existing ones, especially those related to debt limits. However, one should always allow for the possibility that even the best designed fiscal rules will be eventually circumvented through new and more creative methods of fiscal evasion. Moreover, the potential benefits of the rules must be balanced against the losses they may impose if they hamper countercyclical policies (Krol & Svorny, 2007 Levinson, 1998 and Tanner, 2004). Alesina's (2010, p. 15) observation is instructive as it puts the limitations of BBRs in a broader context that points to the root cause of the problem: “Fiscal rules can moderately help well intended governments but one should not place too much faith in them. Without a political will to engage in fiscally sustainable policy there is virtually no rule which can induce an unwilling government do to so.” (Emphasis added) Any fiscally sustainable policy must necessarily address the structural component of the deficit. This is particularly imperative in regions that have been suffering from loss of revenues due to erosion of some tax bases (Great Lakes), or chronic overspending (Far West dominated by California). However, the required expenditure and tax reforms (Chapman, 2008) are often painful and politically costly creating a “budgetary pathology” where the electorate desires more government services and benefits than it is willing to pay for and, at the same time, demands government fiscal responsibility and public officials favor tax and spending policies that have short-term benefits and long-term costs (Block, 2008). The reform process, thus, needs to address this pathology by emphasizing that there is no such a thing as a free lunch. The devolution of many federal programs and federal grant policies contribute to this rather disconcerting fiscal climate to the extent that they stimulate (over) spending on programs that SLGs would not have adopted without federal grants, because the programs did not reflect their high priorities, or they could not afford them out of own-source revenues. Federal grant policy reforms need to include converting open-ended “matching” grant programs (such as Medicaid) that increase the incentive to overspend by lowering the “price” of the programs to states to lump-sum “block” grants that come with more flexibility for states in program design. A few cautionary words are in order. Balancing recorded revenue and expenditure flows is not necessarily an indicator of good fiscal health. This is because governments use a “cash-flow” based accounting (that records revenues when they are received and expenditures when they are paid within a fiscal year) instead of the “accrual” accounting method (that records revenues and expenditures when the rights to receive and obligations to pay arise) (Block, 2008). Thus, fiscal balances can be improved through underfunding post-employment health benefits and pension funds of public sector employees at the expense of accumulating huge liabilities over time. Assessing fiscal sustainability based on expenditure and revenue measures estimated using the forward looking accrual accounting method is a fruitful line of future research.