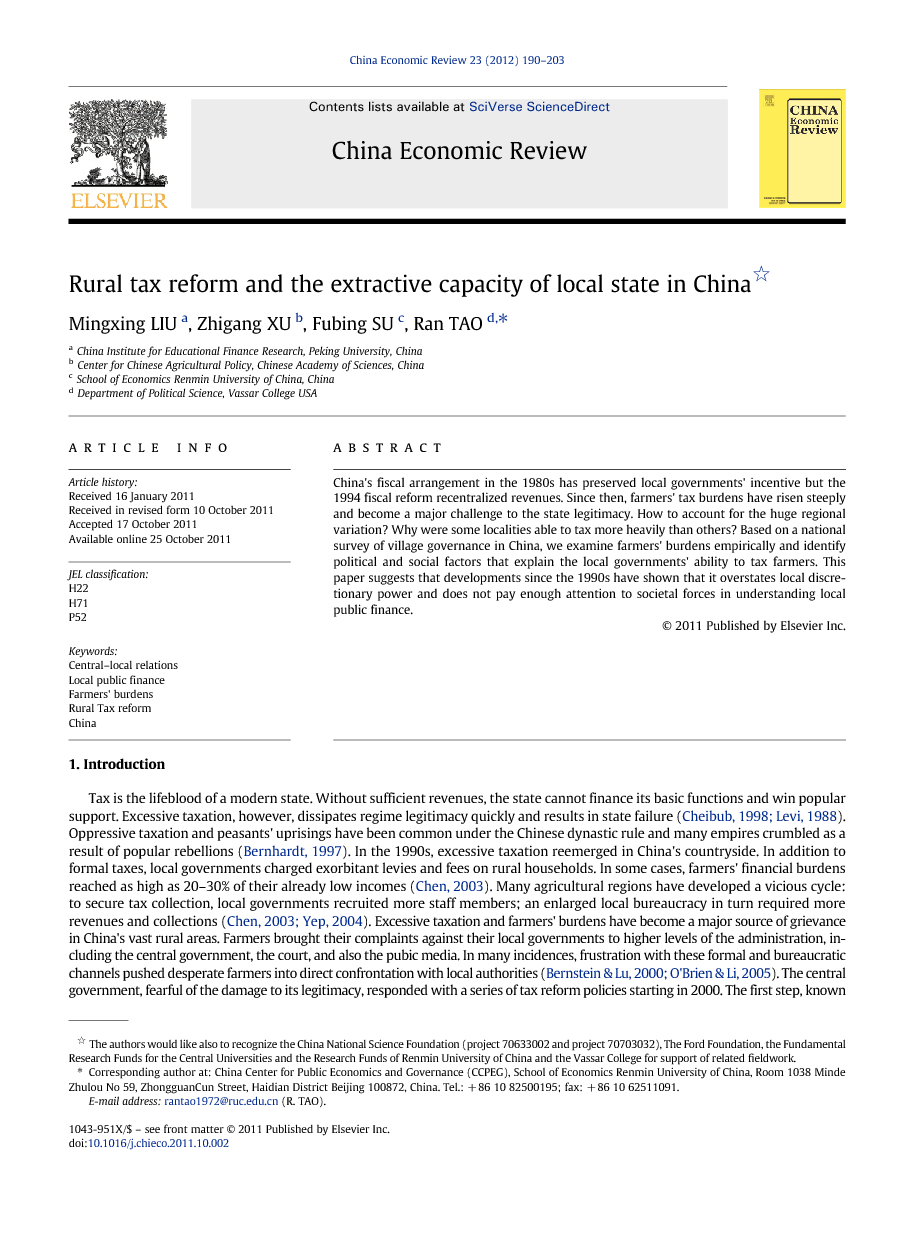 China's fiscal arrangement in the 1980s has preserved local governments' incentive but the 1994 fiscal reform recentralized revenues. Since then, farmers' tax burdens have risen steeply and become a major challenge to the state legitimacy. How to account for the huge regional variation? Why were some localities able to tax more heavily than others? Based on a national survey of village governance in China, we examine farmers' burdens empirically and identify political and social factors that explain the local governments' ability to tax farmers. This paper suggests that developments since the 1990s have shown that it overstates local discretionary power and does not pay enough attention to societal forces in understanding local public finance.

Farmers' burdens in the early 2000s have become a serious challenge threatening local public finance in China. Based on a national survey, we show that the rural tax reform has indeed reduced tax burdens in rural China. However, almost all of the tax reduction can be attributed to the lessening of taxation with central permission. There was very little reduction in the amount of taxation beyond central permission. In some regions local governments even carried out more local fundraising activities and charged farmers high administrative fees to compensate for the revenue shortfalls. In addition to the central–local dimension, local governments' taxation power was checked by its relationship with the society. Farmers' resistance has undermined local governments' capacity to extract funds illegally. And rural self-governing organizations helped to reduce farmers' burdens by becoming a substitute for certain functions of the local government, like providing public goods. According to some scholars, China's local governments have acquired a lot of discretion in local public finance. Our study suggests that the central state is still capable of directing local governments to serve its own interest. The rise of excessive taxation can be seen as a consequence of fiscal recentralization and imposition of unfunded mandates in the 1990s. The reduction of farmers' burdens further indicates the authority of the center. After all, China is a unitary state and the central government still holds a lot of power in deciding fiscal matters of the country. However, the continuing existence of illegitimate fundraising activities also reveals the limit of the seemingly powerful state. The toleration of administrative fees may be the center's strategy to get local governments onboard the agricultural tax reform. It also showcases the central leadership's fundamental dilemma in managing local public finance. A fully centralized fiscal system does not work well in a country with tremendous regional heterogeneity. Efficiency requires the central government to accept local discretion in revenue extraction and public service provision. Our study of rural taxation captures the complexity of the central–local dynamics in China and warns against any simplistic portrayal of an omnipotent central state or totally runaway local states. For non-China scholars, China provides an excellent opportunity for comparative case studies. Despite the myth about absolute power, dictators must exercise their authority through agents, many of which have different interests and have the discretion to modify the policy from below. This perspective of power can shed light on the discussion about power as well as explanation of institutional changes in other authoritarian regimes. This paper also emphasizes the importance of adjusting local state–society relations in China's rural governance. Self-governing organizations in the rural areas have played a substituting role for local public goods provision in some localities. Encouraging community organizational development should be an important component of further rural governance reform in China. But, as Tsai (2007) has argued, the role of community organizations in providing within-village public goods was usually limited. By substituting formal state apparatus, these organizations may actually lead to an undersupply of local public goods in the village. This effect became more pronounced in the aftermath of the rural tax reform. Many villages have reported cutting back teachers' salaries and consolidating primary schools in rural areas. This will likely offset the political gains from abolishing rural taxation (Qu, 2005). For the time being, the central government has been channeling financial resources from the central budgets to compensate for the revenue shortfalls. However, merely increasing the transfer of funds may not be sufficient to create the incentive for local government to provide the needed public services. In another word, the fundamental problem with local taxation is not that local governments extract resources, but how it is done. In the long run, a better functioning local governance in China necessitates much wider and more meaningful participation by both expanding the local democracy and by promoting the developments of grassroots informal organizations. From this perspective, strengthening democratic institutions at grassroots level — that is, village and township elections — may have the greatest potential of bringing accountability to local public finance. With electoral pressure, local leaders should also have incentive to listen to rural residents and provide adequate public goods in their jurisdictions.