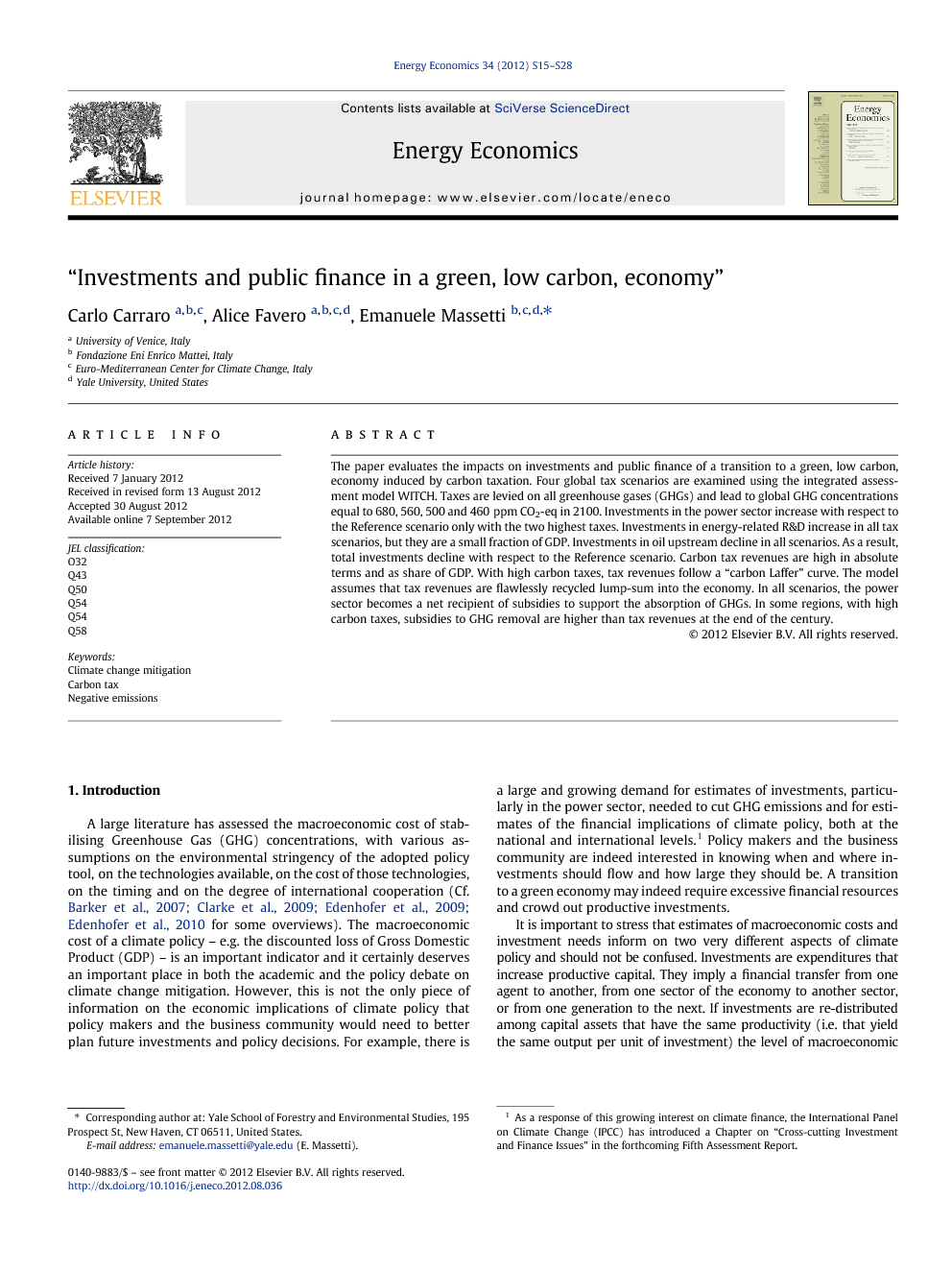 The paper evaluates the impacts on investments and public finance of a transition to a green, low carbon, economy induced by carbon taxation. Four global tax scenarios are examined using the integrated assessment model WITCH. Taxes are levied on all greenhouse gases (GHGs) and lead to global GHG concentrations equal to 680, 560, 500 and 460 ppm CO2-eq in 2100. Investments in the power sector increase with respect to the Reference scenario only with the two highest taxes. Investments in energy-related R&D increase in all tax scenarios, but they are a small fraction of GDP. Investments in oil upstream decline in all scenarios. As a result, total investments decline with respect to the Reference scenario. Carbon tax revenues are high in absolute terms and as share of GDP. With high carbon taxes, tax revenues follow a “carbon Laffer” curve. The model assumes that tax revenues are flawlessly recycled lump-sum into the economy. In all scenarios, the power sector becomes a net recipient of subsidies to support the absorption of GHGs. In some regions, with high carbon taxes, subsidies to GHG removal are higher than tax revenues at the end of the century.

A large literature has assessed the macroeconomic cost of stabilising Greenhouse Gas (GHG) concentrations, with various assumptions on the environmental stringency of the adopted policy tool, on the technologies available, on the cost of those technologies, on the timing and on the degree of international cooperation (Cf. Barker et al., 2007, Clarke et al., 2009, Edenhofer et al., 2009 and Edenhofer et al., 2010 for some overviews). The macroeconomic cost of a climate policy – e.g. the discounted loss of Gross Domestic Product (GDP) – is an important indicator and it certainly deserves an important place in both the academic and the policy debate on climate change mitigation. However, this is not the only piece of information on the economic implications of climate policy that policy makers and the business community would need to better plan future investments and policy decisions. For example, there is a large and growing demand for estimates of investments, particularly in the power sector, needed to cut GHG emissions and for estimates of the financial implications of climate policy, both at the national and international levels.1 Policy makers and the business community are indeed interested in knowing when and where investments should flow and how large they should be. A transition to a green economy may indeed require excessive financial resources and crowd out productive investments. It is important to stress that estimates of macroeconomic costs and investment needs inform on two very different aspects of climate policy and should not be confused. Investments are expenditures that increase productive capital. They imply a financial transfer from one agent to another, from one sector of the economy to another sector, or from one generation to the next. If investments are re-distributed among capital assets that have the same productivity (i.e. that yield the same output per unit of investment) the level of macroeconomic activity is not affected. Macroeconomic costs arise when investments are redistributed from more productive uses to less productive uses. This loss of productivity generates a lower level of output, which is the true net cost of climate policy for the economy as a whole. The Integrated Assessment Modeling community has been prolific in providing estimates of the macroeconomic costs of climate policy but has virtually neglected investment needs. For example, among the large set of papers collected in two recent Special Issues published by Energy Economics – one on the Energy Modeling Forum (Clarke et al., 2009) and the other on the Asia Modeling Exercise (Calvin et al., forthcoming) – none presents estimates of investment needs. There is only a handful of studies that estimate investments flows and their distribution and financial implications using large-scale, sophisticated, energy-economy models (Edenhofer et al., 2009, IEA, 2010, IEA, 2011 and Riahi et al., 2012). Among those, only Riahi et al. (2012) use the full potential of an Integrated Assessment Model (MESSAGE) to provide information on investment needs with a high technological detail under a mix of climate and energy policies which are consistent with a 2 °C above pre-industrial level in 2100. Edenhofer et al. (2009) provide little information on aggregate investments in the power sector. IEA (2010) and IEA (2011) provide estimates with high technological detail but the analysis is limited to 2030.2 This paper contributes to this embryonic literature by providing a detailed assessment of investment needs and public finance in four representative green economy scenarios generated using the Integrated Assessment Model WITCH (Bosetti et al., 2006, Bosetti et al., 2007 and Bosetti et al., 2009a).3 The transition to a green, low carbon, economy is induced by four tax scenarios stabilising GHG concentrations in the atmosphere to 680, 560, 500 and 460 ppm CO2-equivalent (ppm CO2-eq) by the end of the century. As a consequence, global mean temperature increases in 2100 between 3.2 °C and 2 °C above pre-industrial levels. We examine the impact of climate policy on investments and current expenditures in the power sector, on investments in Research and Development (R&D) in the energy sector, on investments in the oil sector and on other aggregate non-energy investments. Investments in the power and in the oil sectors are endogenous in the model, as are energy demand and fuel prices. R&D investments are also endogenous. We complete our assessment of climate finance by providing estimates of carbon tax revenues and their implications on public finance. With respect to Riahi et al. (2012), this paper analyses four climate policy targets instead of one. By focusing on climate policy alone instead than on a mix of climate and energy policies, we can establish a relationship between the stringency of the tax (the long-term concentration target) and investment needs. We also provide estimates of R&D investments in the energy sector and an assessment of carbon tax revenues, which are not part of the analysis of Riahi et al. (2012). Finally, we present separate results for OECD and non-OECD countries. Unfortunately, we cannot provide estimates of investments in demand side energy efficiency and in power transmission and distribution as in Riahi et al. (2012), because they are not modelled in WITCH. The rest of the paper is organised as follows. Section 2 presents an overview of the WITCH model. Section 3 introduces the scenario design and presents basic facts of the Reference scenario and of the policy scenarios. Section 4 discusses the relationship between macroeconomic costs, investments and carbon tax revenues in a green, low carbon, economy. Section 5 illustrates changes in the optimal mix of investments and current expenditures in the power sector, investments in the oil upstream sector and in other sectors of the economy. Section 6 deals with investments in innovation. Section 7 examines revenues from carbon taxes. The final section provides a brief summary of our findings.

The Integrated Assessment Modeling community has been prolific in providing estimates of the macroeconomic costs of climate policy, but has virtually neglected investment needs and the distribution of investments over regions, sectors and time. This is however a crucial information to assess the finance side of climate policy. This paper aims at filling this gap in the literature by providing a detailed assessment of investment needs in four representative carbon tax scenarios generated using the Integrated Assessment Model WITCH. Our main findings can be summarised as follows. In our analysis, the transition to a green, low carbon, economy is induced by global carbon taxation. As a reaction to climate policy, global investments in the power sector increase only in the 500 ppm and 460 ppm stabilisation scenarios during the first half of the century. In the 680 ppm and 560 ppm scenarios, global investments in the power sector decline because electricity demand shrinks due to strong efficiency gains induced by climate policy. The higher cost of low- or zero-emission power generation technologies is offset by a contraction of installed capacity. Most interestingly, we find that for mid-range stabilisation targets, investments in the power sector would remain unaltered with respect to the Reference scenario while GDP would decline. Investments in the power sector are more elastic to carbon pricing than aggregate output. In the highest tax scenario, cumulative discounted investments in the power sector over 2010–2050 increase by 10% with respect to the Reference scenario, while over the same time period costs are approximately equal to 1.3%. In our four scenarios, climate policy reduces investments in the generic capital goods, which is used, together with labour and energy, to produce the consumption good of the various economies. Substituting capital and labour for energy reduces productivity and induces a contraction of the optimal investment level. Investments in oil upstream also decline substantially, depressing further the level of investments in the economy. Investments in R&D increase in all scenarios and show a remarkable expansion in the 500 and 460 scenarios. However, investments in R&D continue to attract a fairly small share of GDP even in the high tax scenarios. Therefore, total investments decline in all scenarios. Financial resources shift to the public sector. Global tax revenues are indeed high, both in absolute and relative terms. Interestingly, tax revenues follow a “carbon” Laffer curve, first increasing and then decreasing with the level of taxation. Therefore, cumulative tax revenues are the highest with the mid-range 560 tax scenario. In 2100, tax income reaches US$ 3.8 trillion in the 560 scenario. In terms of GDP, tax revenues vary from a fraction of percentage point to 3.8% of GDP in the 460 scenario. In all scenarios, when taxes are sufficiently high, it becomes optimal to remove GHGs from the atmosphere by subsidising IGCC power plants with CCS. In the highest tax scenario, some regions absorb more GHGs that they emit. Hence, governments would need to increase fiscal pressure or to reduce public expenditures to finance a net absorption of GHGs. Carbon tax revenues are very high (up to 20% of GDP) in developing countries and in resource-based economies. The political and economic feasibility of implementing such large taxation schemes, even if taxes are recycled within the economy, is at least questionable. Many countries might not be able to manage huge carbon tax revenues in an efficient, effective and sustainable way. The above results can be useful to assess the finance implications of climate policy. Policy makers and the business community are indeed increasingly interested in receiving information on the costs and financial needs of the transition to a green economy. Macroeconomic costs and/or technological changes do not constitute a sufficient information. The amount of resources to be invested and those collected by the public sector and then recycled, the distribution of investments over sectors, regions and time are all important information to better understand the economic implications of climate policy.