عنوان انگلیسی
On the preference for full-coverage policies: Why do people buy too much insurance?
دانلود فوری مقاله + سفارش ترجمه 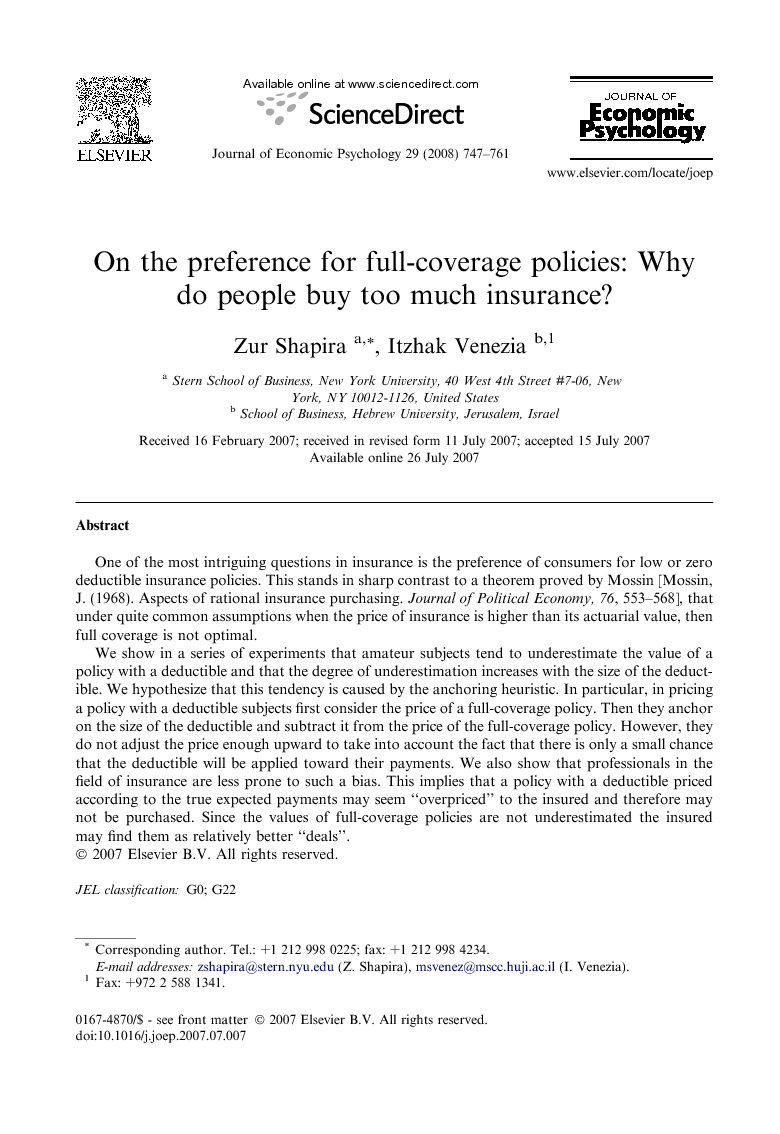 One of the most intriguing questions in insurance is the preference of consumers for low or zero deductible insurance policies. This stands in sharp contrast to a theorem proved by Mossin [Mossin, J. (1968). Aspects of rational insurance purchasing. Journal of Political Economy, 76, 553–568], that under quite common assumptions when the price of insurance is higher than its actuarial value, then full coverage is not optimal. We show in a series of experiments that amateur subjects tend to underestimate the value of a policy with a deductible and that the degree of underestimation increases with the size of the deductible. We hypothesize that this tendency is caused by the anchoring heuristic. In particular, in pricing a policy with a deductible subjects first consider the price of a full-coverage policy. Then they anchor on the size of the deductible and subtract it from the price of the full-coverage policy. However, they do not adjust the price enough upward to take into account the fact that there is only a small chance that the deductible will be applied toward their payments. We also show that professionals in the field of insurance are less prone to such a bias. This implies that a policy with a deductible priced according to the true expected payments may seem “overpriced” to the insured and therefore may not be purchased. Since the values of full-coverage policies are not underestimated the insured may find them as relatively better “deals”.

Our results show that amateurs tend to underestimate the value of policies with a deductible. This bias occurs because subjects are inclined to estimate the value of such policies by calculating the value of an equivalent full-coverage policy, and then subtracting the deductible. In this case, the higher the deductible, the higher the undervaluation of the policy. This bias emanates from subjects’ tendency to anchor on size of the deductible without adjusting enough. The findings suggest that in purchasing insurance policies subjects’ behavior is affected by the anchoring heuristic (Chapman and Johnson, 2002 and Kahneman, 1992), which leads consumers to purchase insurance with low or no deductibles. According to Epley and Gilovich (2006) the anchoring literature deals either with a “phenomenon” (namely, estimates gravitate toward an anchor) or with a “process” where people adjust their final estimates from an initial anchor. They further argue that true insufficient adjustments occur when people adjust insufficiently from values they “generate themselves as starting points from values known to be incorrect but close to the target value.” (p. 312). The authors claim that such self-generated anchors help simplify the complex cognitive process involved in making judgments. Along these lines, it appears that our subjects might have gone through a similar process. They were not provided with an anchor but the amount of deductible was construed by them as a good enough estimate for the price of a policy with a deductible even though they did not verify that it was the correct value. It definitely helped them come up with a plausible value without engaging in an effortful evaluation and they figured out that the error, if existed, could not be substantial. We also find that in comparison with amateurs, professionals are less likely to exhibit the above bias. Professionals are likely to value and price deductible policies correctly (i.e., according to the true expected payments), whereas the general public (amateurs) may find the prices the professionals set for policies with a deductible to be too high compared with their own underestimated expected payments. Note that the professionals in our studies had a similar academic background to that of the amateurs. Yet, the professionals’ experience helped them perform better than the amateurs in the present quantitative experimental setting. Possibly, the professionals’ experience in the field minimizes the tendency to anchor on the deductible when evaluating policies with deductibles. The preference of subjects for low deductibles is often interpreted as an indication of high-risk aversion. Our results suggest that such behavior can also result from cognitive biases. One may argue that such a bias may not have significant effects on market behavior since the more sophisticated insurance sellers may eventually lead the market to a more rational equilibrium. The truth may actually be the opposite. Even if professional insurance sellers are (relatively) immune from this bias, the fact that amateur consumers are affected by it has direct implications since two sides are needed for market transactions. A real life example can illustrate this argument. During the time we ran one of the experiments, the Direct Insurance Corporation, one of the largest insurance companies in Israel advertised insurance rates for car owners. The advertised rates for policies with different levels of deductible for a $30,000 2004 Toyota Corolla, for drivers whose age was 25 or higher, are displayed in Table 4.We used those publicly advertised rates and circulated a survey among MBA students enrolled in a graduate course on “Risk management and insurance” at the Hebrew University. We asked the students to indicate what level of coverage they would choose if they had a car of a similar value and were offered those rates. Forty three students responded to the survey. Twenty-two of them (51%) chose the lower three levels of deductible. Note that in raising the deductible from $137 to $180, an increase of $43, the insured saves $35. Practically, unless the insured is certain that he or she will have an accident, or is extremely risk averse; the lower deductible is not a highly valued alternative. By increasing the deductible from $180 to $245, an increase of $65, the insured saves $42; again unless there is a very high probability of an accident (71%), the higher deductible is more reasonable. We do not have data on the percentage of insureds that buy policies at each level of deductible from the Direct Insurance Company, but it is reasonable to assume that if the insurer advertised this price list, there was demand for all those deductibles. The fact that the insureds in our sample failed to comprehend the implications of the alternatives presented to them has direct market implications. It also complements other studies where investors made costly mistakes, such as in the study of Benartzi and Thaler (2002). Our findings have some ramifications both from the point of view of consumer groups and from the perspectives of regulators in the insurance industry. In the Benartzi and Thaler (2002) study investors appear not to have well defined preferences as their choices depend on irrelevant alternatives, and hence intervention in this market may be desirable. Whereas in their study the bias is due to framing, in our experiments as in Choi, Laibson, Madrian, and Metrick (2004), the bias stemmed from anchoring. A similar argument has been proposed by Gneezy, List, and Wu (2006) who showed that in certain situations subjects preferred the worst outcome of a lottery over the lottery itself. They attribute their finding to the uncertainty effect and claim that in some situations of uncertainty people tend to discount lotteries for uncertainty in a manner similar to the one we discussed above. Finally, the current findings may also be useful in analyzing behavior in other areas where high risk aversion is invoked as an explanation, such as the issue of the risk premium puzzle (Mehra and Prescott, 1985 and Mehra and Prescott, 2003). Future research should examine whether bounded rationality and computational limitations can further our understanding of behavior in other financial puzzles.