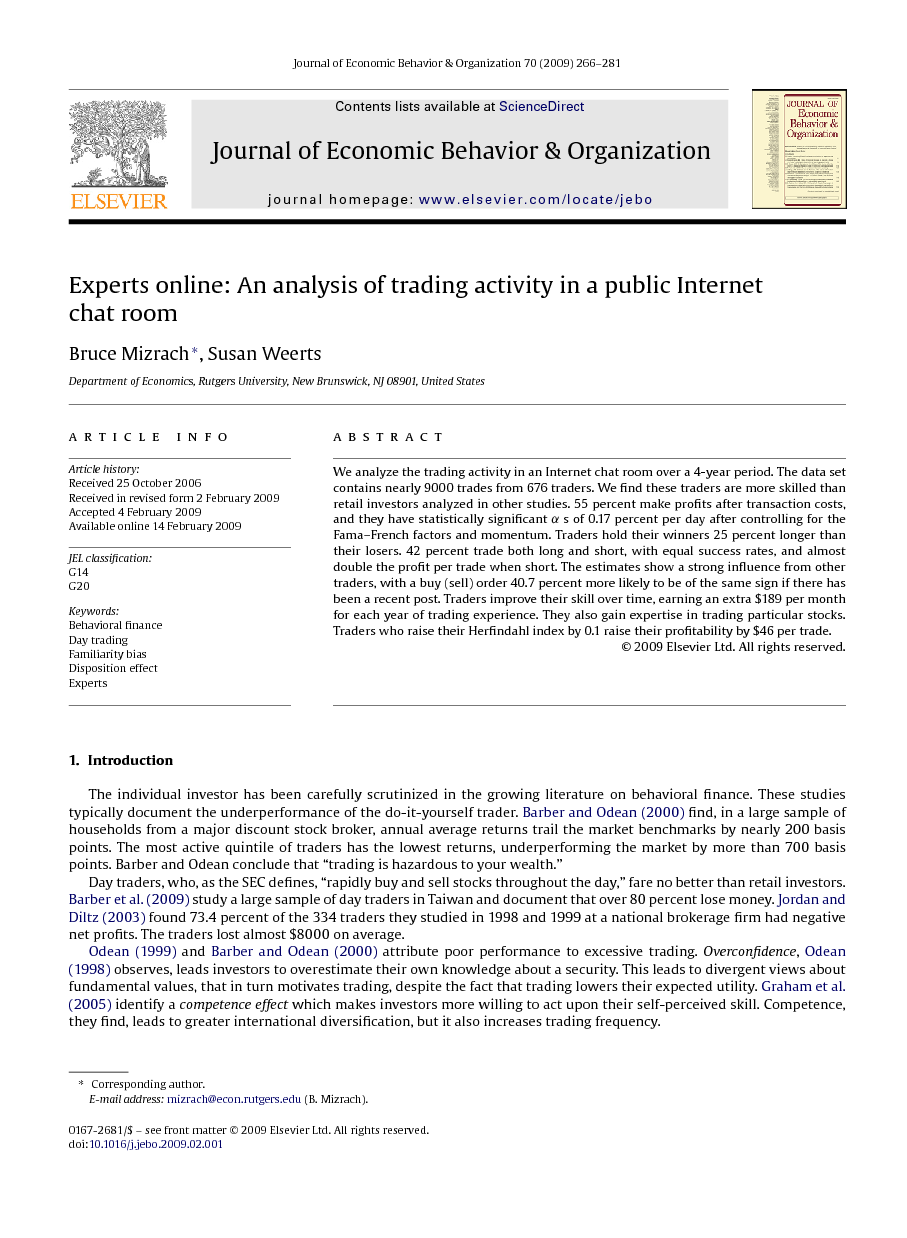 We analyze the trading activity in an Internet chat room over a 4-year period. The data set contains nearly 9000 trades from 676 traders. We find these traders are more skilled than retail investors analyzed in other studies. 55 percent make profits after transaction costs, and they have statistically significant α s of 0.17 percent per day after controlling for the Fama–French factors and momentum. Traders hold their winners 25 percent longer than their losers. 42 percent trade both long and short, with equal success rates, and almost double the profit per trade when short. The estimates show a strong influence from other traders, with a buy (sell) order 40.7 percent more likely to be of the same sign if there has been a recent post. Traders improve their skill over time, earning an extra $189 per month for each year of trading experience. They also gain expertise in trading particular stocks. Traders who raise their Herfindahl index by 0.1 raise their profitability by $46 per trade.

Our group of skilled traders has ignored many of the lessons from their finance classes. They trade very frequently; they focus on the same stocks regardless of market conditions. They make no attempt to diversify. In spite of all these errors, nearly 55 percent earn profits after transactions costs. Trading earns them money, and not surprisingly, they trade often. They are more sophisticated than simple momentum investors. The momentum factor accounts for little of their daily returns. Together with the other Fama–French factors, we estimate a statistically significant α of 0.17 percent per day. Further evidence of their skill can be seen in their ability to earn profits both long and short. Their knowledge also appears to grow and adapt to market conditions. Traders realize losses quickly and hold their winners 25 percent longer. Traders maintain 38 percent of their profits from 1 year to the next. Each year of experience adds to their profits. Concentrating on a small group of stocks enhances their profitability. Goldberg (2006) estimates that, even as day trading ranks have thinned, 27 percent of daily volume on the NYSE and NASDAQ comes from semi-professional traders. We hope that this paper has helped to shed some light on this small but important group.