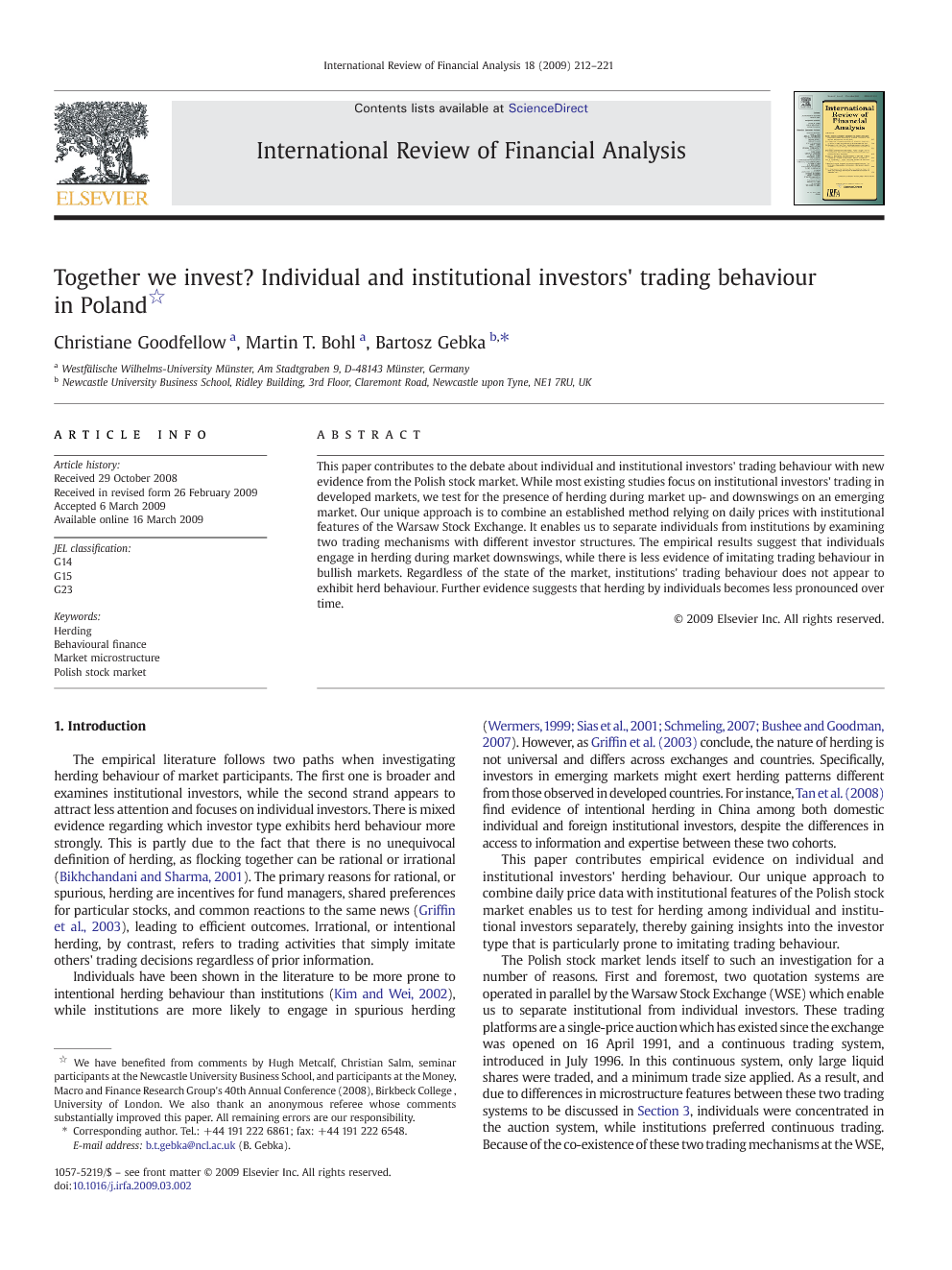 This paper contributes to the debate about individual and institutional investors' trading behaviour with new evidence from the Polish stock market. While most existing studies focus on institutional investors' trading in developed markets, we test for the presence of herding during market up- and downswings on an emerging market. Our unique approach is to combine an established method relying on daily prices with institutional features of the Warsaw Stock Exchange. It enables us to separate individuals from institutions by examining two trading mechanisms with different investor structures. The empirical results suggest that individuals engage in herding during market downswings, while there is less evidence of imitating trading behaviour in bullish markets. Regardless of the state of the market, institutions' trading behaviour does not appear to exhibit herd behaviour. Further evidence suggests that herding by individuals becomes less pronounced over time.

The empirical literature follows two paths when investigating herding behaviour of market participants. The first one is broader and examines institutional investors, while the second strand appears to attract less attention and focuses on individual investors. There is mixed evidence regarding which investor type exhibits herd behaviour more strongly. This is partly due to the fact that there is no unequivocal definition of herding, as flocking together can be rational or irrational (Bikhchandani and Sharma, 2001). The primary reasons for rational, or spurious, herding are incentives for fund managers, shared preferences for particular stocks, and common reactions to the same news (Griffin et al., 2003), leading to efficient outcomes. Irrational, or intentional herding, by contrast, refers to trading activities that simply imitate others' trading decisions regardless of prior information. Individuals have been shown in the literature to be more prone to intentional herding behaviour than institutions (Kim and Wei, 2002), while institutions are more likely to engage in spurious herding (Wermers, 1999, Sias et al., 2001, Schmeling, 2007 and Bushee and Goodman, 2007). However, as Griffin et al. (2003) conclude, the nature of herding is not universal and differs across exchanges and countries. Specifically, investors in emerging markets might exert herding patterns different from those observed in developed countries. For instance, Tan et al. (2008) find evidence of intentional herding in China among both domestic individual and foreign institutional investors, despite the differences in access to information and expertise between these two cohorts. This paper contributes empirical evidence on individual and institutional investors' herding behaviour. Our unique approach to combine daily price data with institutional features of the Polish stock market enables us to test for herding among individual and institutional investors separately, thereby gaining insights into the investor type that is particularly prone to imitating trading behaviour. The Polish stock market lends itself to such an investigation for a number of reasons. First and foremost, two quotation systems are operated in parallel by the Warsaw Stock Exchange (WSE) which enable us to separate institutional from individual investors. These trading platforms are a single-price auction which has existed since the exchange was opened on 16 April 1991, and a continuous trading system, introduced in July 1996. In this continuous system, only large liquid shares were traded, and a minimum trade size applied. As a result, and due to differences in microstructure features between these two trading systems to be discussed in Section 3, individuals were concentrated in the auction system, while institutions preferred continuous trading. Because of the co-existence of these two trading mechanisms at the WSE, we are able to separate individuals from institutional investors and to compare the trading behaviour of these investor groups. Secondly, small local investors played a comparatively important role on the Polish stock market until large open-end pension funds entered the market in May 1999 as a result of the Polish pension system reform. Thirdly, the Polish stock market is an emerging market, on which herding is more likely to be observed than on mature markets due to, for example, incomplete information disclosure (Chang et al., 2000). We test for the presence of herding behaviour in the single-price auction, where individual investors are concentrated, and in continuous trading mostly used by institutions. In light of Lakonishok et al. (1992), Wermers (1999), Chang et al. (2000), and Kim and Wei (2002), we expect to find empirical evidence of Polish individual investors engaging in herding behaviour. By contrast, should there be no indication of herds, this would imply that Polish individual investors are as proficient as institutional investors in mature markets. In addition, we investigate whether herding is exhibited more strongly during up- or downswings of the market, as Christie and Huang (1995) and Chang et al. (2000) report contrary findings. Our results show individuals to engage in herding during market downswings, while there is less evidence of imitating trading behaviour in bullish markets. On the other hand, institutions' trading does not exhibit herd behaviour, regardless of the state of the market. Further evidence suggests that herding by individuals becomes less pronounced over time. This paper demonstrates that an established methodology can be combined with institutional features of a market to differentiate between institutional and individual herding using easily available data on daily prices. By doing so, the researchers can overcome the problem of limited access to information about individual transactions or portfolio holdings. Further contribution lies in the new empirical evidence on herding for an emerging market in its early stage of development. Especially striking is the finding that institutional investors behave like their counterparts in mature markets, and individual investors gain expertise over time. We also report behavioural patterns in up- and down-markets different from those observed in other countries. We review the relevant literature on herding in the next section. In order to give a better understanding of our testing setup, Section 3 describes the institutional background of the Polish stock market, before Section 4 introduces the dataset and the methodology. Section 5 presents the empirical results and Section 6 summarises our findings and concludes.

This paper investigates institutional and individual investors' trading behaviour by testing for the presence of herding on the Polish stock market from July 1996 to November 2000. In order to distinguish between individuals and institutions, we examine two trading platforms separately where stocks can be traded in a single-price call auction and a continuous system. While the former is dominated by individuals (Madhavan, 1992), institutions prefer the continuous system (Kyle, 1985). A further mechanism to differentiate between individuals and institutions is market capitalisation (Falkenstein, 1996). We therefore conduct the analysis by size portfolio for either trading platform. Our findings suggest that individual investors exhibit herding during market downswings and, to a lesser extent, also in market upswings, while institutions do not engage in flocking together regardless of the state of the market. This implies that individuals' investment decisions are prone to sentiment during market stress, while they mostly trust their beliefs and information when stock prices rise. Moreover, Polish institutions trading in the continuous system appear to be as experienced as investors on mature markets, and the information flows on the Polish stock market seem as smooth as on mature markets. Our insights imply for investments in stocks primarily traded by individuals that a larger number of stocks is necessary than in a market that is dominated by experienced institutional investors in order to achieve the same level of diversification (Chang et al., 2000). In a market with herding, asset prices are more strongly correlated than in a market without imitating trading activities. As a result of this raised return correlation, investors need more stocks for the same level of diversification as in a scenario without herding. The empirical evidence further suggests that the trading patterns differ between individuals and institutions across the sample period, with individuals being particularly prone to sentiment-driven investment decisions when the market return declines. This could be attributed to the Polish stock market being an emerging capital market throughout the period under investigation. During more favourable market phases, however, individuals' trading behaviour exhibits less herding and is more likely to result in market outcomes consistent with the predictions of rational asset pricing models. Lastly, having identified a tendency towards diminishing herd behaviour by individuals, and in light of the lack of evidence in favour of herding among institutions, we conclude that the Polish stock market has become more efficient throughout the sample period. Institutional arrangements such as trading systems or legal regulations that foster smooth information flows aid especially individuals in investment behaviour that is consistent with rational asset pricing models. The main contribution of this paper is in demonstrating that the microstructure of the markets can be combined with an established methodology utilising easily obtainable daily price data, which makes it possible to analyse investor behaviour in exceptional depth. The empirical evidence from a new market reported here allows us to extend the notion of Griffin et al. (2003): not only is the nature of herding different across countries and exchanges, it can differ across trading platforms of one stock exchange, too.