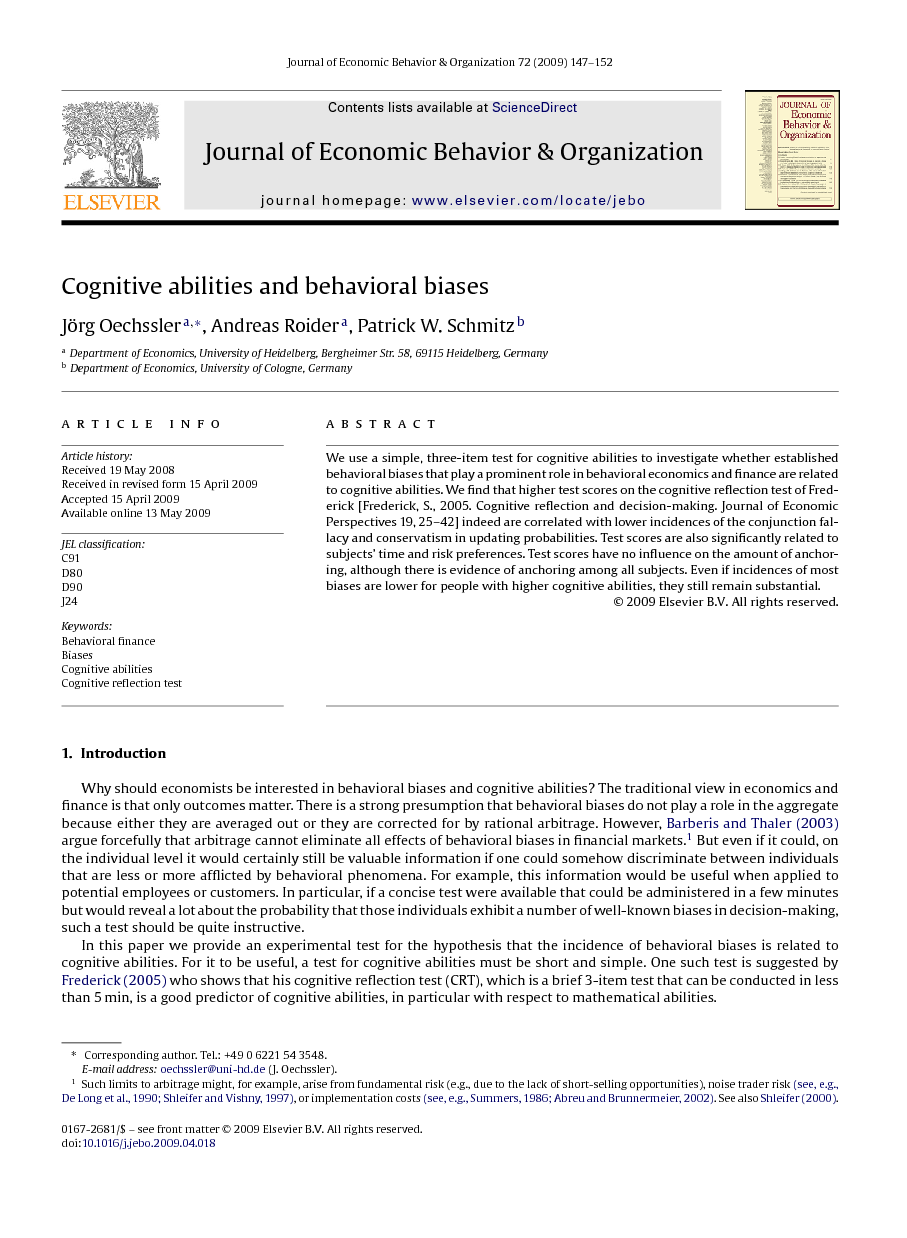 We use a simple, three-item test for cognitive abilities to investigate whether established behavioral biases that play a prominent role in behavioral economics and finance are related to cognitive abilities. We find that higher test scores on the cognitive reflection test of Frederick [Frederick, S., 2005. Cognitive reflection and decision-making. Journal of Economic Perspectives 19, 25–42] indeed are correlated with lower incidences of the conjunction fallacy and conservatism in updating probabilities. Test scores are also significantly related to subjects’ time and risk preferences. Test scores have no influence on the amount of anchoring, although there is evidence of anchoring among all subjects. Even if incidences of most biases are lower for people with higher cognitive abilities, they still remain substantial.

Why should economists be interested in behavioral biases and cognitive abilities? The traditional view in economics and finance is that only outcomes matter. There is a strong presumption that behavioral biases do not play a role in the aggregate because either they are averaged out or they are corrected for by rational arbitrage. However, Barberis and Thaler (2003) argue forcefully that arbitrage cannot eliminate all effects of behavioral biases in financial markets.1 But even if it could, on the individual level it would certainly still be valuable information if one could somehow discriminate between individuals that are less or more afflicted by behavioral phenomena. For example, this information would be useful when applied to potential employees or customers. In particular, if a concise test were available that could be administered in a few minutes but would reveal a lot about the probability that those individuals exhibit a number of well-known biases in decision-making, such a test should be quite instructive. In this paper we provide an experimental test for the hypothesis that the incidence of behavioral biases is related to cognitive abilities. For it to be useful, a test for cognitive abilities must be short and simple. One such test is suggested by Frederick (2005) who shows that his cognitive reflection test (CRT), which is a brief 3-item test that can be conducted in less than 5 min, is a good predictor of cognitive abilities, in particular with respect to mathematical abilities. A number of recent studies have already demonstrated two stylized facts about the relationship between cognitive ability and economic behavior Frederick, 2005, Benjamin et al., 2006, Slonim et al., 2007 and Dohmen et al., 2007. First, individuals with high cognitive abilities seem to be less risk averse when gambling in the positive domain.2 Second, they seem to be more patient.3 In this study, we replicate those earlier studies (and their main findings) with respect to risk and time preferences. But we also extend the hypothesis to a number of biases that play a crucial role, for example, in the behavioral finance literature (see Barberis and Thaler, 2003, for a comprehensive survey). In particular, we study the conjunction fallacy, anchoring, and conservatism with respect to probability updating. We find that individuals with low CRT scores are significantly more likely to be subject to the conjunction fallacy and to conservatism with respect to probability updating. Test scores have no influence on the amount of anchoring, although there is evidence of anchoring among all subjects.