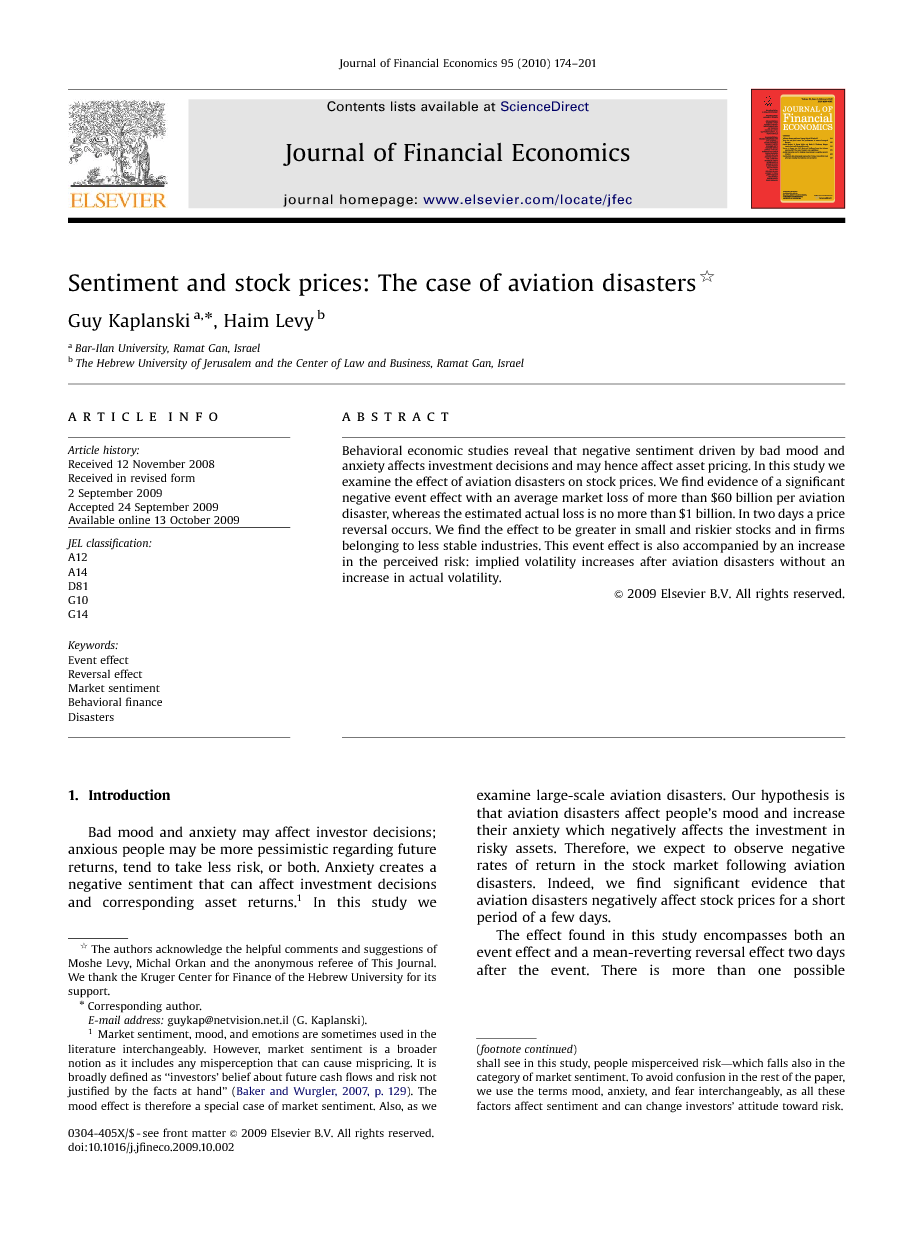 Behavioral economic studies reveal that negative sentiment driven by bad mood and anxiety affects investment decisions and may hence affect asset pricing. In this study we examine the effect of aviation disasters on stock prices. We find evidence of a significant negative event effect with an average market loss of more than $60 billion per aviation disaster, whereas the estimated actual loss is no more than $1 billion. In two days a price reversal occurs. We find the effect to be greater in small and riskier stocks and in firms belonging to less stable industries. This event effect is also accompanied by an increase in the perceived risk: implied volatility increases after aviation disasters without an increase in actual volatility.

In this study, we find that aviation disasters are followed by negative rates of return in the stock market accompanied by a reversal effect two days later. As the transitory decline in the stock market is more than 60 times larger than the direct economic loss, we look for an explanation of this discrepancy in the realm of behavioral economics. Indeed, psychological studies show that exposure to media coverage of aviation disasters can provoke bad mood, anxiety and fear which may induce people to be more pessimistic, not to take risks, or both. Therefore, the hypothesis of this study is that with the increased anxiety following aviation disasters there is a short-term reduction in the demand for risky assets, which in turn affects stock prices. When anxiety subsides, or when sophisticated investors exploit the effect, a reversal in the stock market takes place. We find that the effect is largest for disasters corresponding to American airline companies, smaller but still highly significant for disasters corresponding to European airline companies, and completely disappears for disasters corresponding to the rest of the world's airline companies. In addition, consistent with the prediction of Baker and Wurgler (2006) that market sentiment has a larger effect on stocks with valuations that are highly subjective and difficult to arbitrage, we find the effect to be larger for small firms, firms with more volatile stocks, and firms belonging to less stable industries. While it is possible that anxiety induces an increase in the degree of risk aversion, we find that on the event day the implied volatility, as reflected in the VIX and VXO, significantly increases, which may imply that aviation disasters also affect the perceived volatility. The hypothesis that fear and anxiety, rather than real economic factors, affect people's decisions after aviation disasters is supported by the fact that we find no evidence for a change in actual volatility after aviation disasters. Is there also a flight to safety on event days? Here the results are less clear-cut. Although on event days, on average, the yields on short-term Treasury securities decrease and the U.S. dollar strengthens against other currencies, these two changes are insignificant. It is possible that selling risky assets and investing in various relatively safe assets dilutes this phenomenon; the price of each safe asset changes in the predicted direction, but as there are a variety of relatively safe assets, the change corresponding to each asset is insignificant. The event effect is significant under various definitions of the event day. However, the empirical evidence shows that the effect is more related to the arrival of detailed and disturbing information to the public attention, than to the arrival of the first news on the event itself. Moreover, the effect corresponding to disasters that occur on U.S. soil begins earlier than the effect corresponding to disasters that occur far away. Similarly, over the last three decades, the effect begins earlier than in the three decades preceding that, probably due to the development of the communication media. An interesting area for future research is to study whether the market is efficient, namely whether one can obtain abnormal returns by executing an investment strategy based on the findings of this paper. Another possible avenue along this line is to examine the change in the price of options due to the increase in the perceived volatility, and whether a profitable position can be established in the option market when transaction costs are incorporated.