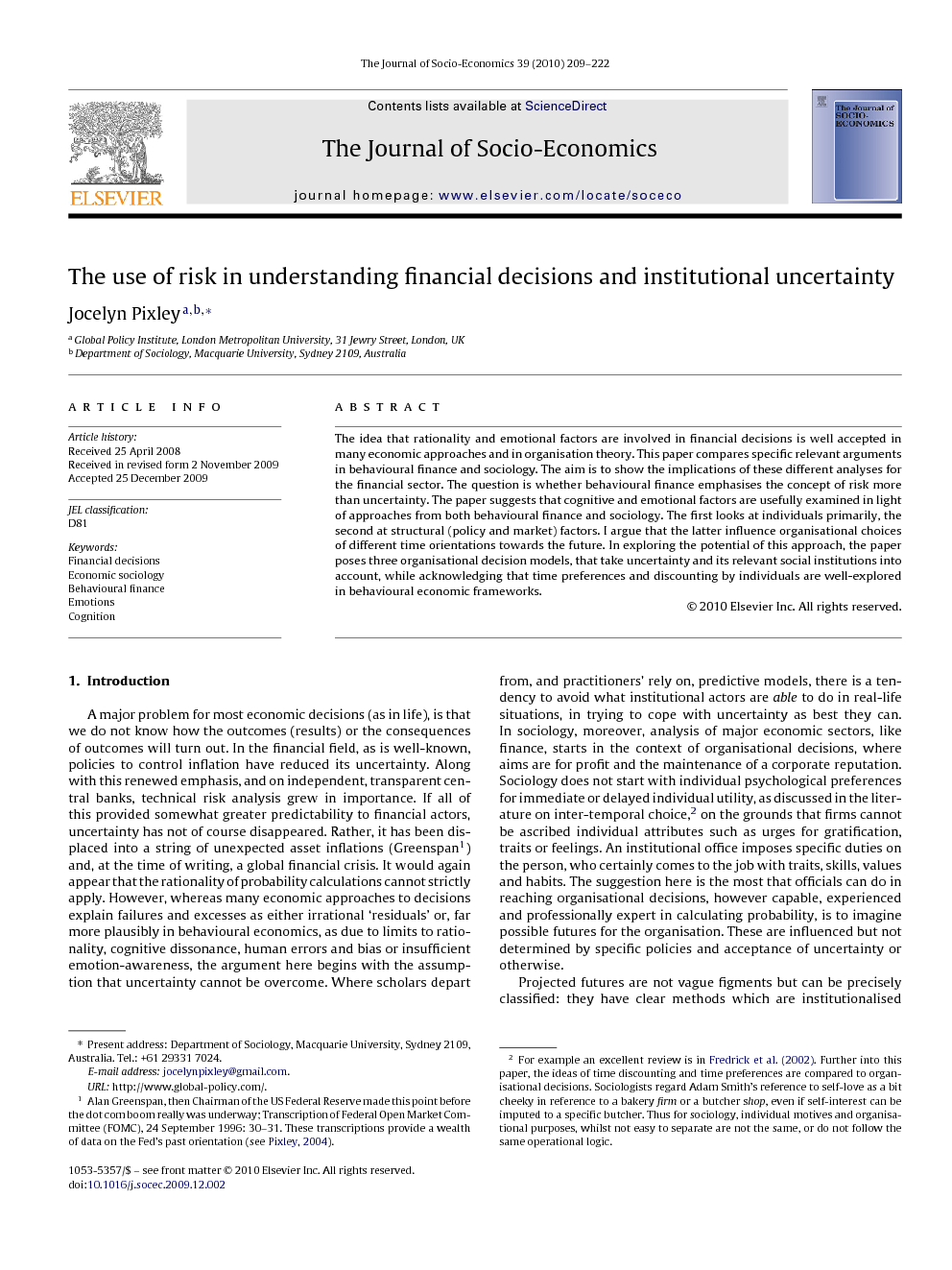 The idea that rationality and emotional factors are involved in financial decisions is well accepted in many economic approaches and in organisation theory. This paper compares specific relevant arguments in behavioural finance and sociology. The aim is to show the implications of these different analyses for the financial sector. The question is whether behavioural finance emphasises the concept of risk more than uncertainty. The paper suggests that cognitive and emotional factors are usefully examined in light of approaches from both behavioural finance and sociology. The first looks at individuals primarily, the second at structural (policy and market) factors. I argue that the latter influence organisational choices of different time orientations towards the future. In exploring the potential of this approach, the paper poses three organisational decision models, that take uncertainty and its relevant social institutions into account, while acknowledging that time preferences and discounting by individuals are well-explored in behavioural economic frameworks.

A major problem for most economic decisions (as in life), is that we do not know how the outcomes (results) or the consequences of outcomes will turn out. In the financial field, as is well-known, policies to control inflation have reduced its uncertainty. Along with this renewed emphasis, and on independent, transparent central banks, technical risk analysis grew in importance. If all of this provided somewhat greater predictability to financial actors, uncertainty has not of course disappeared. Rather, it has been displaced into a string of unexpected asset inflations (Greenspan1) and, at the time of writing, a global financial crisis. It would again appear that the rationality of probability calculations cannot strictly apply. However, whereas many economic approaches to decisions explain failures and excesses as either irrational ‘residuals’ or, far more plausibly in behavioural economics, as due to limits to rationality, cognitive dissonance, human errors and bias or insufficient emotion-awareness, the argument here begins with the assumption that uncertainty cannot be overcome. Where scholars depart from, and practitioners’ rely on, predictive models, there is a tendency to avoid what institutional actors are able to do in real-life situations, in trying to cope with uncertainty as best they can. In sociology, moreover, analysis of major economic sectors, like finance, starts in the context of organisational decisions, where aims are for profit and the maintenance of a corporate reputation. Sociology does not start with individual psychological preferences for immediate or delayed individual utility, as discussed in the literature on inter-temporal choice,2 on the grounds that firms cannot be ascribed individual attributes such as urges for gratification, traits or feelings. An institutional office imposes specific duties on the person, who certainly comes to the job with traits, skills, values and habits. The suggestion here is the most that officials can do in reaching organisational decisions, however capable, experienced and professionally expert in calculating probability, is to imagine possible futures for the organisation. These are influenced but not determined by specific policies and acceptance of uncertainty or otherwise. Projected futures are not vague figments but can be precisely classified: they have clear methods which are institutionalised in organisations and determine new policies and create financial products. For example, futures can be imagined by constructing a few long-term and openly declared uncertain futures in order to reach a decision or, conversely by drawing on a long-term past of booms, the Great Depression and hyper-inflation (see Fig. 1, Fig. 2 and Fig. 3 on pp. 10, 11, 12). Nearly every central banker constructs numerous parallels with historical pasts to arrive ex ante at what past event might plausibly apply to the current decision. This prevalent mode is not, then, about individual time preferences. The most typical time orientation of the commercial financial sector focuses on the present, yet, none of these time-views is an attribute of individuals or their personal psychology in the first instance. Individuals are required, in their official positions, to estimate futures in these specific time-frameworks (Pixley, 2009). For example, well-capitalised firms could choose any time perspective, compared to individuals who may be constrained by socio-economic position and personality-type. But firms may have an imposed competitive framework, or large debt which renders ‘short-termism’ essential for profitability, share value or (sometimes) survival. With such a present-orientation, risk assessment models – with some assumptions that are quite ordinary often described as ‘extreme events’ in the tails of probability distributions (Rajan, 2005) – are cognitive and emotional ‘scripts’ of organisations for rationalising away uncertainty and the necessity of emotions in the collective active sense of esprit de corps.3 This is less likely with the other time-views (which are not infallible either). It is fair to say, though, that financial problems have arisen with exclusive use of short-term models, such as the role of portfolio insurance in the 1987 crash (Jacobs, 1999) and the predictive products which unravelled during 2007. Of course, whether individual creators of each innovative product really believed – ex ante – that their products were infallible, or just another approach in a pragmatic, competitive search for new ways to make profits and keep market share, is less easily answered. In my view, that is the crucial question. Meantime, the notion that emotions and intuition provide a rational, stabilising framework as much – or more than – a destabilising role for decisions, whether collective or individual (Pixley, 2004) is increasingly accepted in a wide literature. The paper first reviews, very selectively, the approaches to decisions in behavioural economics/finance and psychology where affect can be an alternative to cognitive reasoning or can help cognitive reasoning.4 It examines whether these challenges to the rational economic agent of orthodoxy start with an assumption of inevitable uncertainty or depart with other assumptions – more about risk. They certainly include the important one of heuristics, particularly affect. The paper also briefly reviews some organisation approaches. Second, it introduces three time-views, and briefly explores the explanatory potential of these dynamic models within firms and at the field level. The hypothesis is that collective anticipations about the future are framed by time orientations which vary among firms/bureaucracies within the current Anglo-American financial policies that regulate markets. The ways that time-views are chosen in other finance centres, and whether time discounting by individuals is comparable to organisations, are also relevant to this question. By introducing time into the question of how firms decide and act, I suggest that cognition, emotion and ethical responsibilities are equally involved in board-room and firm decisions. All three ways of facing the future could be usefully used in the process.

Formal rationality is not possible in the sense that calculations cannot be made about the unknowable.25 Officials have to cope. The processes of formal rationality are recreated each time the rules of the financial game are changed: as Wiley puts it, we only have ‘cognitive wrappings’ to put around uncertainty and simply make leaps of faith (Wiley, 1983: 42, 40). This paper argues that cognitive and emotional rules prescribe three coping strategies, in different assessments of past, present and future. When the rules of the financial game changed in the 1970s, an emphasis on present-orientation and reliance on probability set in, despite many banks facing failure and bail-outs since then. So, as discussed, major economic decisions are made rationally under the motivation of specific emotions. The neglect of uncertainty is a source of irrationality, not emotions which give direction and motive to decisive action. Although banks invest heavily in IT-driven predictive models, it is difficult to assess the extent that prediction over the short-term is relied upon irrationally by the financial sector, when long-term leverage for arbitrage and so forth is the other still-current practice. A system-wide ‘tranquility of success’ does give motive to a boom just as emotions of pessimism give direction to depression, but is that because competition truly instills a present-orientation or because some banks do accept uncertainty, but pass on very poor outcomes to others? Although emotions are not fully controllable, trust and distrust in the social institutions and conventions that reduce our perceptions of uncertainty are not irrational, in that nothing new would happen, gains and losses would not occur, if our world were predictable. Reason can show that, but rationality (e.g., in rational choice) cannot. Although research in behavioural finance proves conclusively that emotions are involved in decisions, its early tendency to focus on biases and errors in probability gave little space to the problem that it is not possible to predict the future. It emphasised decision-making in the short-run too much. The ‘bias’ towards ‘over-confidence’ among experts is a very useful finding, and includes convictions about a grim future. Yet, to that we should add the self-referential nature of money in the broader context. However professional and trustworthy financial agents may be, financial decisions are always reliant on promises being met. At a systemic level, unpredictably depending on competitors, incentive structures, policies and time-views, people have to believe and to act, even if some of this negative or positive confidence later proves ‘wrong’. Human frailty is ever-present, it will never control the unknowable future, but how humans face time is perhaps mid-way between the emotions that we share with animals, and cognitive patterns taken to time that help us to imagine a future and decide, for good and ill. Individual time preferences and motives may vary, conflict and they are socially shaped. Yet how organisations face time is not readily comparable. Psychological analysis of people's time preferences cannot show why central banks invariably take a past-orientation, nor why banks vary in time-views, yet why the present-view is currently so dominant. Behavioural economics has convincingly repudiated rational choice and yet sociology can show systemic problems that cannot be neglected. Global policies and historical transformations shape the climate of feeling that motivates action at important moments, and becomes institutionalised for varying lengths of time. It would be nice to see combined research on this worrying matter.