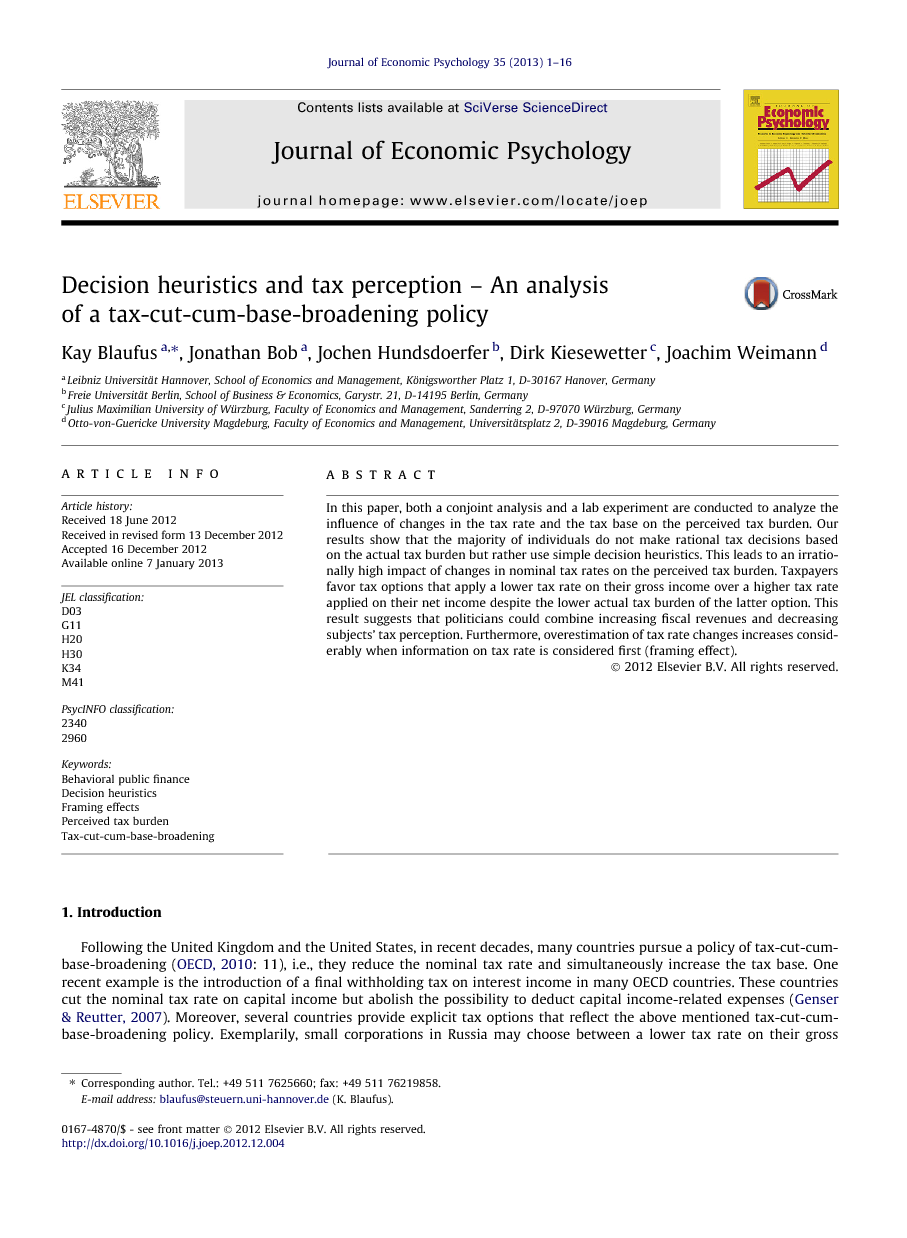 In this paper, both a conjoint analysis and a lab experiment are conducted to analyze the influence of changes in the tax rate and the tax base on the perceived tax burden. Our results show that the majority of individuals do not make rational tax decisions based on the actual tax burden but rather use simple decision heuristics. This leads to an irrationally high impact of changes in nominal tax rates on the perceived tax burden. Taxpayers favor tax options that apply a lower tax rate on their gross income over a higher tax rate applied on their net income despite the lower actual tax burden of the latter option. This result suggests that politicians could combine increasing fiscal revenues and decreasing subjects’ tax perception. Furthermore, overestimation of tax rate changes increases considerably when information on tax rate is considered first (framing effect).

Following the United Kingdom and the United States, in recent decades, many countries pursue a policy of tax-cut-cum-base-broadening (OECD, 2010: 11), i.e., they reduce the nominal tax rate and simultaneously increase the tax base. One recent example is the introduction of a final withholding tax on interest income in many OECD countries. These countries cut the nominal tax rate on capital income but abolish the possibility to deduct capital income-related expenses (Genser & Reutter, 2007). Moreover, several countries provide explicit tax options that reflect the above mentioned tax-cut-cum-base-broadening policy. Exemplarily, small corporations in Russia may choose between a lower tax rate on their gross income and a higher tax rate on their net income. In France and Germany taxpayers may—under certain conditions—choose whether their dividends are taxed under a progressive tariff based on their net income or under a flat tax based on their gross income. The aforementioned tax reforms are usually reasoned by expected efficiency gains and tax simplification (e.g., Kopczuk, 2005). We propose a behavioral approach as an additional explanation as to why politicians pursue such a policy of tax-cut-cum-base-broadening: the use of decision heuristics that lead to an irrationally high impact of nominal tax rate reductions on taxpayers’ perceived burden. Previous economic and psychological research already shows that attitudes toward tax policies are subject to several biases (McCaffery & Baron, 2004). As early as 1960 Schmölders finds evidence that a high percentage of entrepreneurs overestimate their tax burden (Schmölders, 1960: 84f). Especially, if tax complexity is high or if taxes are non-salient, subjects make substantial decision errors (Boylan and Frischmann, 2006, Chetty et al., 2009, Rupert et al., 2003 and Rupert and Wright, 1998). In addition, research shows that price complexity influences buyers’ price perceptions and demands. Breaking down the price into several components (e.g., base price and shipping costs) leads to a decrease in the perceived price and an increased demand for the corresponding commodity (see Morwitz, Greenleaf, & Johnson, 1998). Krishna and Slemrod (2003) discuss the potential meaning of these price research results for tax policy and Chetty et al. (2009) find that using prices plus sales tax instead of the net amounts leads to a significant reduction in demand. The following article is also based on this idea and is, to our knowledge, the first to examine whether the perceived tax burden is dependent upon which price component (tax rate or tax base) is changed. The calculation of the tax burden is regarded as a complex task (Kirchler, 2007: 32). As we know from previous research decision heuristics are used in such complex tasks, particularly. Therefore, it seems reasonable to assume that subjects will use heuristics in our tax framing. Even though there are papers on the use of decision heuristics in tax contexts (e.g., McCaffery & Baron, 2003), a paper on the relationship between decision heuristics and a tax-cut-cum-base-broadening policy is missing. The main purpose of this study is to examine whether the use of decision heuristics leads to a misperception of changes in nominal tax rates compared to changes in tax deductions. We analyze (i) whether decision heuristics are used in choosing between tax systems that differ, exclusively, in the nominal tax rate and the amount of tax deductible expenses, (ii) whether the use of decision heuristics will induce subjects to overemphasize the importance of nominal tax rate changes relative to changes in the amount of tax deductible expenses, and (iii) whether framing effects drive the misperception of nominal tax rate changes compared to tax base changes. To this aim, we conduct (i) a survey study (conjoint analysis) with a sample of German working individuals that represents the population in terms of age, education, gender, and income and (ii) a lab experiment with working individuals who are compensated according to their experimental performance. By combining these two methods we are able to benefit from the respective strengths of both procedures. First of all, conjoint analysis allows us to draw a large (representative) sample. Moreover, we are able to measure preferences on the individual level. This incorporates the advantage of conjoint analysis to identify whether individuals choose a decision heuristic over the rational ranking. On the other hand, conjoint analysis is a mere preference measurement whereas a lab experiment sets monetary incentives. Besides, while in conjoint analysis the task is performed just once, the lab experiment enables us to execute the task multiple times. The remainder of this article is organized as follows. First, in Section 2 we discuss the effects that decision heuristics may have on the perceived importance of nominal tax rate changes and derive our hypotheses. The sample, method, and results are presented in Sections 3 and 4, “Conjoint Analysis” and “Experimental Validation”, respectively. A discussion of the results and the implications for tax policy and research are carried out in Section 5.

If individuals behave rationally according to traditional economic theory, it makes no difference whether their tax rate or (by equal measure) their tax deductions change. By contrast, if one takes into account the idea that individuals tend to avoid cognitive strain and instead use simplified decision heuristics changes in the tax rate may influence the perceived tax burden more strongly than do changes in the tax base. To empirically test the hypothesis regarding the use of heuristics, the resulting overestimation of the importance of changes in tax rates, and the framing effect, we conduct both a conjoint analysis and a lab experiment. In line with behavioral studies incorporating the burden of cognitive strain, our results reveal that the majority of the subjects use decision heuristics. The use of heuristics leads to a noticeable overestimation of the relative importance of changes in tax rates and to an underestimation of the importance of changes in the tax base. We show that the overestimation increases considerably when information about the tax rate is mentioned first (framing effect). Even after the introduction of performance based incentives we observe that subjects still overestimate nominal tax rate changes. However, we find slight evidence for learning effects. After the implementation of a learning environment, the use of heuristics decreases weak significantly, but even after learning the majority of subjects do not make a rational choice. Most subjects still overrate the importance of the nominal tax rate. Our results indicate that politicians could simultaneously increase tax revenues and reduce the perceived tax burden for taxpayers. Taxpayers favor tax options that apply a lower tax rate on their gross income over a higher tax rate applied on their net income despite the lower actual tax burden of the latter option. This result remains stable in a lab experiment where performance-based incentives and a learning environment are established. Consistent with the identified framing effect, emphasizing the nominal tax rate when presenting tax options can reduce the perceived tax burden solely through the display format. Our study offers starting points for future research. First, the present study only considers the effect of non-specified income-related expenses. It would be interesting to analyze whether subjects also underestimate the importance of changes in the deductibility of emotionally loaded costs like commuting expenses. Second, we study the behavior of the German working population not the behavior of tax experts. Thus, it would be worth to explore if our results also hold for specialized decision makers in companies. Third, we do not vary complexity. According to current research (e.g., Blaufus & Ortlieb, 2009), subject’s performance decreases with increasing complexity. Fourth, we abstract from distribution and equity effects that are usually affected by introducing new tax options. Finally, even though considering changes in tax rate and tax base simultaneously is specific to taxes, it would be interesting to see, whether our results regarding overestimation are of relevance for non-tax frames, too. For example, our results could be relevant for consumer price research. According to our results the value of a relative price discount should be perceived as higher when it is applied at a higher discount rate on a narrow base (e.g. product price excluding extras) compared to a lower discount rate on a broad base (e.g. product price including extras).