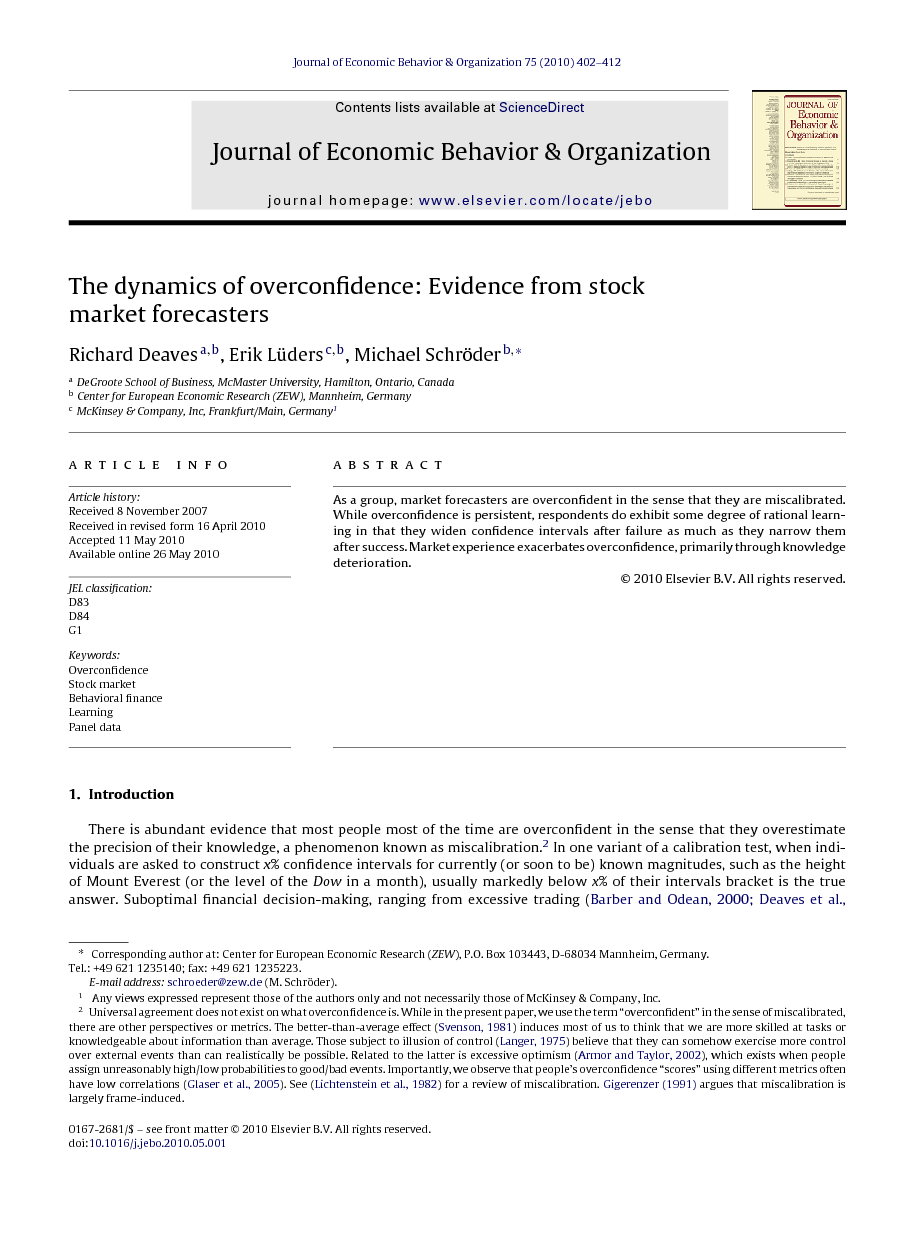 As a group, market forecasters are overconfident in the sense that they are miscalibrated. While overconfidence is persistent, respondents do exhibit some degree of rational learning in that they widen confidence intervals after failure as much as they narrow them after success. Market experience exacerbates overconfidence, primarily through knowledge deterioration.

There is abundant evidence that most people most of the time are overconfident in the sense that they overestimate the precision of their knowledge, a phenomenon known as miscalibration.2 In one variant of a calibration test, when individuals are asked to construct x% confidence intervals for currently (or soon to be) known magnitudes, such as the height of Mount Everest (or the level of the Dow in a month), usually markedly below x% of their intervals bracket is the true answer. Suboptimal financial decision-making, ranging from excessive trading ( Barber and Odean, 2000 and Deaves et al., 2008) and underdiversification (Goetzmann and Kumar, 2008) on the part of investors; or excessive entry into markets (Camerer and Lovallo, 1999), allowing investment to be dictated by cashflows (Malmendier and Tate, 2005) and over-investment (Ben-David et al., 2007) on the part of entrepreneurs and managers, has been argued to flow from various forms of overconfidence. It is not just neophytes who are overconfident: more surprisingly, so are experts in their fields.3 This includes practitioners in business and finance.4 The insight that overconfidence is less likely if feedback is frequent and unambiguous (Fischhoff et al., 1977) leads to the expectation that this behavioral flaw is less common for frequent forecasters of unambiguous events. One example is individuals who earn their living in part by making stock market forecasts. Given the profit motive that is front and center in financial markets, weak performance should make survival more difficult, encouraging a sense of self-awareness by survivors.5 Since both investors and corporate decision-makers use forecasts for portfolio formation and planning purposes, a poor sense of the market's true volatility can inflict harm. If people recall their successes and failures equally clearly, over time they should obtain an accurate view. In this sense, experience should engender wisdom. On the other hand, the prevalence and persistence of overconfidence suggest that the forces able to eliminate it are weak. Most problematically, self-attribution bias leads us to remember our successes with great clarity, if not embellishment (Miller and Ross, 1975).6 Along these lines, in the dynamic model of Gervais and Odean (2001), past successes exacerbate overconfidence, while past failures tend to be downplayed.7 The result is that those who have had the good fortune of being successful in their fields might for a time be more overconfident than new entrants. Eventually, however, experience should reveal to people their true knowledge level. The purpose of this paper is to examine both the statics and dynamics of overconfidence of stock market forecasters. The survey instrument employed is the ZEW Finanzmarkttest which is a monthly survey of financial market practitioners in Germany. Respondents are asked for 90% confidence intervals for the level of the DAX 6 months ahead. While an analysis of forecasting accuracy is far from unusual, the purpose here is quite different. The availability of not just point estimates but also confidence intervals allows for a careful exploration of overconfidence in both its static and dynamic manifestations. Graham and Harvey (2003) make use of a somewhat similar dataset of CFO forecasts and confidence intervals for the U.S. stock market. Their focus is not on overconfidence, however, as they investigate what can be learned about ex ante equity premiums and the relationship between risk and return. We begin by investigating whether, consistent with previous evidence, the respondent group as a whole is overconfident. Next we explore whether survey respondents adjust their confidence intervals in response to past successes and failures. The relationship between experience and miscalibration is then considered. To preview, market forecasters are overconfident. While overconfidence persists, some learning does seem to occur as confidence intervals widen with failure and narrow with success in equal measure. Greater market experience is associated with higher levels of overconfidence. Section 2 describes the ZEW Finanzmarkttest. The next section specifies the hypotheses to be tested. Section 4 details the key empirical findings, and the final section concludes.

The present research has explored the statics and dynamics of miscalibration-based overconfidence. Not surprisingly given previous work on experts, the Finanzmarkttest respondent group was shown to be overconfident. Nevertheless, some rational learning does seem to have taken place as respondents increase the widths of their confidence intervals with failure as much as they decrease them with success. Less amenable to rationality though is evidence at the level of the market, with high past returns inducing increased aggregate overconfidence. Also pointing away from rational learning is the fact that market experience does not lead to better calibration, though self-attribution bias does not seem to be the driving force behind this finding. In short, the evidence on the dynamics of overconfidence is mixed and subject to interpretation. Nevertheless, given that there is abundant evidence that overconfidence is a pervasive phenomenon and certainly difficult to “debias” (Fischhoff, 1982), and that so many financial behaviors have been linked theoretically and empirically to the phenomenon, continued research is without doubt called for.