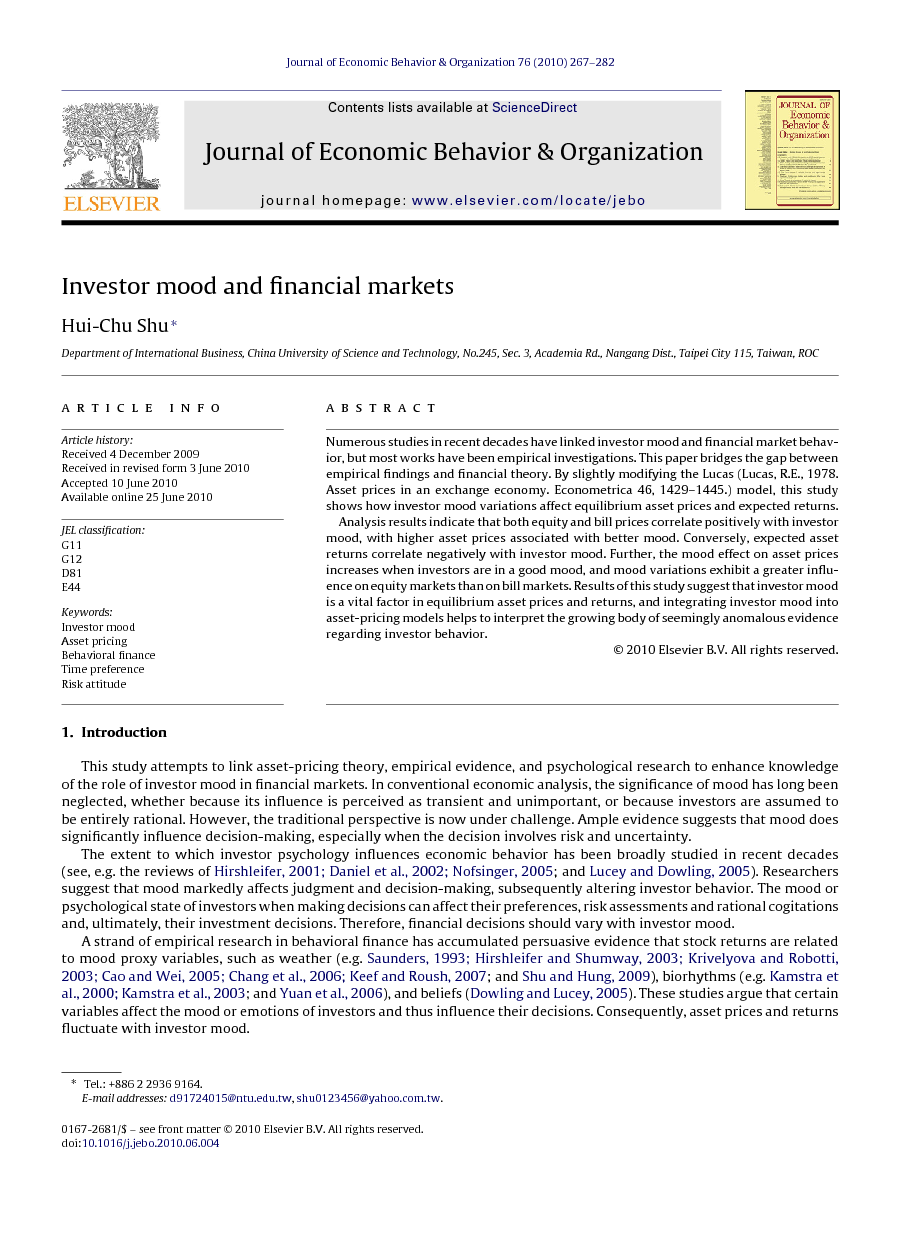 Numerous studies in recent decades have linked investor mood and financial market behavior, but most works have been empirical investigations. This paper bridges the gap between empirical findings and financial theory. By slightly modifying the Lucas (Lucas, R.E., 1978. Asset prices in an exchange economy. Econometrica 46, 1429–1445.) model, this study shows how investor mood variations affect equilibrium asset prices and expected returns. Analysis results indicate that both equity and bill prices correlate positively with investor mood, with higher asset prices associated with better mood. Conversely, expected asset returns correlate negatively with investor mood. Further, the mood effect on asset prices increases when investors are in a good mood, and mood variations exhibit a greater influence on equity markets than on bill markets. Results of this study suggest that investor mood is a vital factor in equilibrium asset prices and returns, and integrating investor mood into asset-pricing models helps to interpret the growing body of seemingly anomalous evidence regarding investor behavior.

This study attempts to link asset-pricing theory, empirical evidence, and psychological research to enhance knowledge of the role of investor mood in financial markets. In conventional economic analysis, the significance of mood has long been neglected, whether because its influence is perceived as transient and unimportant, or because investors are assumed to be entirely rational. However, the traditional perspective is now under challenge. Ample evidence suggests that mood does significantly influence decision-making, especially when the decision involves risk and uncertainty. The extent to which investor psychology influences economic behavior has been broadly studied in recent decades (see, e.g. the reviews of Hirshleifer, 2001, Daniel et al., 2002 and Nofsinger, 2005; and Lucey and Dowling, 2005). Researchers suggest that mood markedly affects judgment and decision-making, subsequently altering investor behavior. The mood or psychological state of investors when making decisions can affect their preferences, risk assessments and rational cogitations and, ultimately, their investment decisions. Therefore, financial decisions should vary with investor mood. A strand of empirical research in behavioral finance has accumulated persuasive evidence that stock returns are related to mood proxy variables, such as weather (e.g. Saunders, 1993, Hirshleifer and Shumway, 2003, Krivelyova and Robotti, 2003, Cao and Wei, 2005, Chang et al., 2006 and Keef and Roush, 2007; and Shu and Hung, 2009), biorhythms (e.g. Kamstra et al., 2000 and Kamstra et al., 2003; and Yuan et al., 2006), and beliefs (Dowling and Lucey, 2005). These studies argue that certain variables affect the mood or emotions of investors and thus influence their decisions. Consequently, asset prices and returns fluctuate with investor mood. However, compared to the extensive empirical evidence that mood affects financial markets, its effects on equilibrium asset prices are relatively unsubstantiated. Although some studies in the past decade have modeled investor psychology, most have focused on psychological bias (e.g. narrow-framing, overconfidence, representativeness heuristic, over- and under-reaction, ambiguity aversion and familiarity) or on concern about future feelings (e.g. loss- and disappointment-aversion) rather than on mood variations. Thus, the influence of shifting investor mood on equilibrium asset prices and returns remains an open challenge. Thus, this study attempts to fill the above gap in the literature by investigating the influence of investor mood variations on financial markets using a simple general equilibrium asset-pricing model. By slightly modifying the Lucas (1978) model, this study demonstrates how slight mood variations can induce financial market fluctuation. Drawing on psychological literature, time preference and risk attitude are employed as mood factors. This analytical work shows that the model satisfactorily explains many financial market phenomena. This study offers a general equilibrium perspective of the claims that better investor mood is associated with higher asset prices, that mood variations have a greater effect on asset prices when most investors are in a good mood than when they are in a bad mood, and that mood influences equity markets more than it affects bill markets since investing in the former entails increased complexity and uncertainty. Above analytical results are consistent with psychological concepts. This preliminary study attempts to link traditional asset-pricing models, behavior finance, and psychology. Traditional asset-pricing models have been argued to fail to account for historically observed asset returns as they ignore investor psychology aspects, and empirical research in behavior finance have documented the impact of investor mood on financial markets (see the review of Hirshleifer, 2001 and Lucey and Dowling, 2005) while lacking explicit economic theoretical explanation. If only traditional models, or behavioral finance, or psychology could provide a single but fragmentary knowledge for the complexity of investor behavior. Standing along, each has its limitations. Merged together, their knowledge and insights become more powerful, meaningful, and applicable to the reality. This work links the psychology literature with mood factors and shows that introducing mood factors into a traditional asset-pricing model adequately explains several empirical findings in behavior finance research and also improves understanding of mood in financial markets. Briefly, this study contributes to the literature by identifying the economic effects of investor mood variations on equilibrium asset prices and returns. In addition to connecting psychology research and asset-pricing theory, this study also bridges the gap between theory and practical evidence. By associating theory, empirical findings, and psychology, this study improves understanding of the role of mood in financial markets. Above all, this study contributes to the growing literature on mood and investor behavior (e.g. Loewenstein, 2000, Mehra and Sah, 2002, Lo and Repin, 2002 and Falato, 2009). The rest of this paper is organized as follows. Section 2 reviews pertinent psychological literature on how mood affects judgment, decision-making, time preferences and risk attitude. Section 3 then summarizes the empirical findings that this study attempts to explain. Next, Section 4 introduces the proposed model and derives the closed-form expressions for the prices and expected returns of equities and bills. Section 5 analyzes the influence of mood variations on asset prices and returns. Conclusions are finally drawn in Section 6, along with recommendations for future research.

Wisdom is cultivated by studying the past and by intelligently applying the lessons learned to the present. Importantly, integrating knowledge from other domains into financial and economic research can help to understand otherwise puzzling aspects of financial markets. This study adopts a conventional asset-pricing model to show that mild investor mood variations have rich implications for financial markets. Mood states, a well recognized factor in human perception and behavior, has an impact on risk attitude and time preference and significantly affects the equilibrium of asset prices and returns. Thus, understanding mood factors can help to resolve some of the most prominent documented market anomalies. To gain further insight into investor behavior, financial economists have growingly accepted psychological explanations. However, embedding investor mood in theoretical analyses is still at the early stage of research. This analysis provides a general equilibrium perspective over a broad set of important empirical findings regarding how investor mood fluctuations affect financial markets. Although the causal association between market anomalies and investor mood is well documented in the behavioral finance literature, most reported data are empirical. This study fills the gap between practical findings and asset-pricing theory. Specifically, this study offers a novel explanation for financial market volatility. The cause of over-volatility in equity markets has attracted much academic interest, but is still unsolved. This study suggests that considering varying investor mood can help to explain violent fluctuations in equity markets. This study also suggests that varying time preference substantially affects equity markets. Increased time preferences significantly increase equity prices and reduce expected equity returns. Thus, if investor time preferences are even slightly altered by certain factors, the equity markets may accordingly swing violently. The effect of varying risk attitude is smaller but still non-negligible. Overall, this analysis provides a theoretical interpretation for how mood fluctuations influence asset pricing, and it suggests that considering investor mood in asset-pricing models can help interpret the growing body of seemingly anomalous evidence in financial markets. As human behavior is motivated by both thought and feelings, neither should be ignored in financial decision-making. The results of this study suggest that equally weighting thoughts and feelings goes a long way toward interpreting investor behavior. However, for an enhanced understanding of how investor mood affects financial asset prices, further study is needed to determine what influences investor mood and emotion, how mood fluctuations spread, and why mood influences investor attention to certain groups of stocks. Further, if investor mood can predict asset price movements, it may be possible to measure overall investor mood in advance to predict market prices. If so, investors can benefit from exploiting the prediction. Thus, designing and developing a measurement method is a promising area of future research.