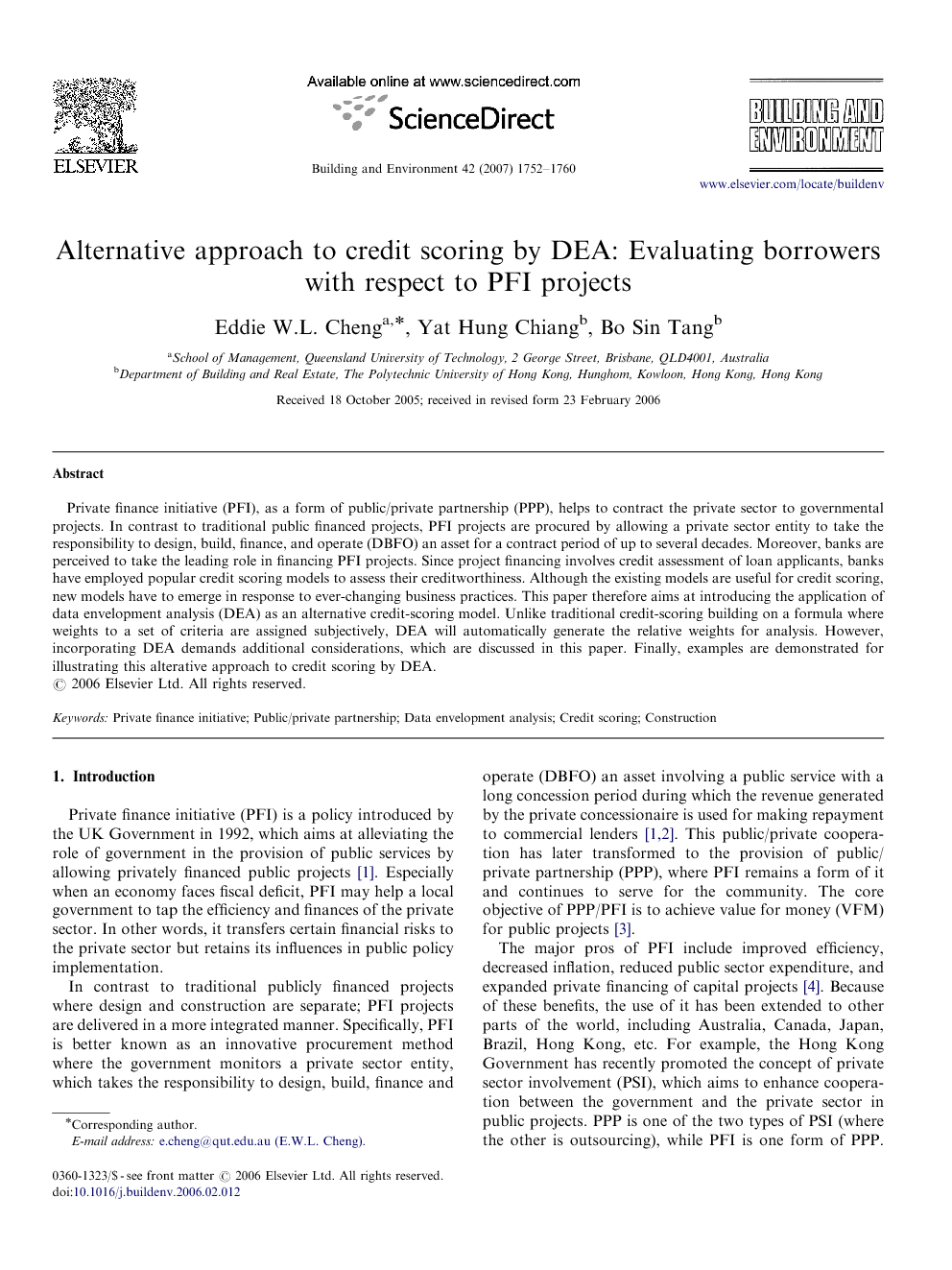 Private finance initiative (PFI), as a form of public/private partnership (PPP), helps to contract the private sector to governmental projects. In contrast to traditional public financed projects, PFI projects are procured by allowing a private sector entity to take the responsibility to design, build, finance, and operate (DBFO) an asset for a contract period of up to several decades. Moreover, banks are perceived to take the leading role in financing PFI projects. Since project financing involves credit assessment of loan applicants, banks have employed popular credit scoring models to assess their creditworthiness. Although the existing models are useful for credit scoring, new models have to emerge in response to ever-changing business practices. This paper therefore aims at introducing the application of data envelopment analysis (DEA) as an alternative credit-scoring model. Unlike traditional credit-scoring building on a formula where weights to a set of criteria are assigned subjectively, DEA will automatically generate the relative weights for analysis. However, incorporating DEA demands additional considerations, which are discussed in this paper. Finally, examples are demonstrated for illustrating this alterative approach to credit scoring by DEA.

Private finance initiative (PFI) is a policy introduced by the UK Government in 1992, which aims at alleviating the role of government in the provision of public services by allowing privately financed public projects [1]. Especially when an economy faces fiscal deficit, PFI may help a local government to tap the efficiency and finances of the private sector. In other words, it transfers certain financial risks to the private sector but retains its influences in public policy implementation. In contrast to traditional publicly financed projects where design and construction are separate; PFI projects are delivered in a more integrated manner. Specifically, PFI is better known as an innovative procurement method where the government monitors a private sector entity, which takes the responsibility to design, build, finance and operate (DBFO) an asset involving a public service with a long concession period during which the revenue generated by the private concessionaire is used for making repayment to commercial lenders [1] and [2]. This public/private cooperation has later transformed to the provision of public/private partnership (PPP), where PFI remains a form of it and continues to serve for the community. The core objective of PPP/PFI is to achieve value for money (VFM) for public projects [3]. The major pros of PFI include improved efficiency, decreased inflation, reduced public sector expenditure, and expanded private financing of capital projects [4]. Because of these benefits, the use of it has been extended to other parts of the world, including Australia, Canada, Japan, Brazil, Hong Kong, etc. For example, the Hong Kong Government has recently promoted the concept of private sector involvement (PSI), which aims to enhance cooperation between the government and the private sector in public projects. PPP is one of the two types of PSI (where the other is outsourcing), while PFI is one form of PPP. The construction industry in Hong Kong has a long history in handling partnership between public and private parties, such as participating in subsidized housing through the Public Sector Participation Scheme (PSPS) and other build–operate–transfer (BOT) projects [5]. Thus, there are no major barriers anticipated in the promotion of such a partnership-driven policy as PFI in Hong Kong. Similar to many other innovations, PFI cannot emerge without flaws. First, funding is a major problem for PFI projects [6]. Small and medium-sized companies have argued that PFI is just a fantasy rather than a real opportunity for them. On account of their relatively weaker financial background, it is not possible for them to compete with their larger counterparts unless they are able to obtain sufficient monetary backup by financiers (e.g., banks). Second, it has been argued that financiers have impeded the commencement of a project due to their prolonged negotiation with borrowers, causing delays in reaching commercial agreements. The contractual process can be made faster if financiers are brought to an earlier stage of the tendering process. Getting the financiers to be involved earlier could be initiated by the borrower itself or stated as part of the initial project agreement by the project provider [2]. In considering these views, we can see that less costly but supportive credit rating models become a key factor encouraging and facilitating interested parties bidding for such projects. One kind of these models is credit scoring, which is now prevailing in the banking industry to evaluate creditworthiness of commercial borrowers. Credit-scoring assessment has changed the way how the society is dealing with commercial lending. Credit scoring is a tool that has been used for commercial lending since the mid-1990s. It helps to justify if a commercial loan is worth lending. Credit scoring is expected to increase credit availability for small businesses because borrowers can obtain unsecured credit from distant lenders through direct marketing channels [7]. As banks are perceived to take the leading role in financing PFI projects, loan applicants have to face credit-scoring assessment. Frame et al. [7] found that credit scoring was adopted by 42% of responded banks for automatically approving or rejecting loan applications and influenced 32% of them in altering loan terms. Unexpectedly, they discovered that only 13% of banks made their own credit-scoring models. Instead, most banks rely on a generic scorecard for decision making [8]. It is not to say that generic scorecards have to be avoided, but banks are advised to be wary of the risk associated with these commercially available services that may not totally match their business objectives. Although, there is a number of useful credit-scoring models available in the market, development of new models is underway in response to ever-changing business practices. Also, the prevailing rating systems usually rely on assessment criteria with predetermined weights assigned to them. The subjectively assigned weights need to be adjusted regularly so that a more reliable credit score is computed to truly reflect the financiers’ market niche. This prompts the authors of this paper to introduce the application of data envelopment analysis (DEA) in credit scoring. DEA is an effective tool for multi-criteria decision-making (MCDM). Since weights of criteria (or the so-called factor weights) are automatically assigned, it helps to eliminate the need of assigning weights. This study is intended to introduce this alternative way for undertaking credit scoring, which is apt for assessing the borrowers pertaining to a PFI project. This DEA technique is an alternative approach to credit scoring. The rest of the paper starts with an introduction of the basics of credit scoring. Then, it presents the essentials of DEA and provides the reasons why DEA is apposite to the estimation of credit scoring. Two examples are demonstrated for illustrating the utility of DEA in credit scoring. Finally, conclusions are made with some remarks.

PFI projects need active participation of the private sector. In order to increase the number of bidders for PFI projects, banks’ involvement is crucial as they provide the financial backup for borrowers. Among other methods, credit scoring is a popular method for rating borrowers pertaining to their creditworthiness. Existing credit-scoring models rely heavily on identifying important assessment criteria. These models mainly involve a subjective process of assigning weights to the criteria. A more objective means is to apply DEA in credit scoring. This helps to minimize or eliminate the problems (e.g., time-consuming, difficulty) encounted during the subjective process for assigning weights. Therefore, the present paper introduces an alternative approach to credit scoring by DEA for assessing borrowers for PFI projects. Two DEA models are presented and examples are demonstrated. If there is an effective way for conducting credit assessment of borrowers, all parties will benefit. By employing the proper method, banks can provide a fast and accurate credit assessment. By receiving a fast loan approval, borrowers are able to apply for PFI projects. By mustering more bidders for PFI projects, the government can raise the standard and quality of the procured projects. The DEA models are merely opted for credit scoring. Other risk analyses are required for assuring the right lending decision having been made. For example, monitoring borrowers’ performance during the concession period necessitates other methods such as survival analysis.