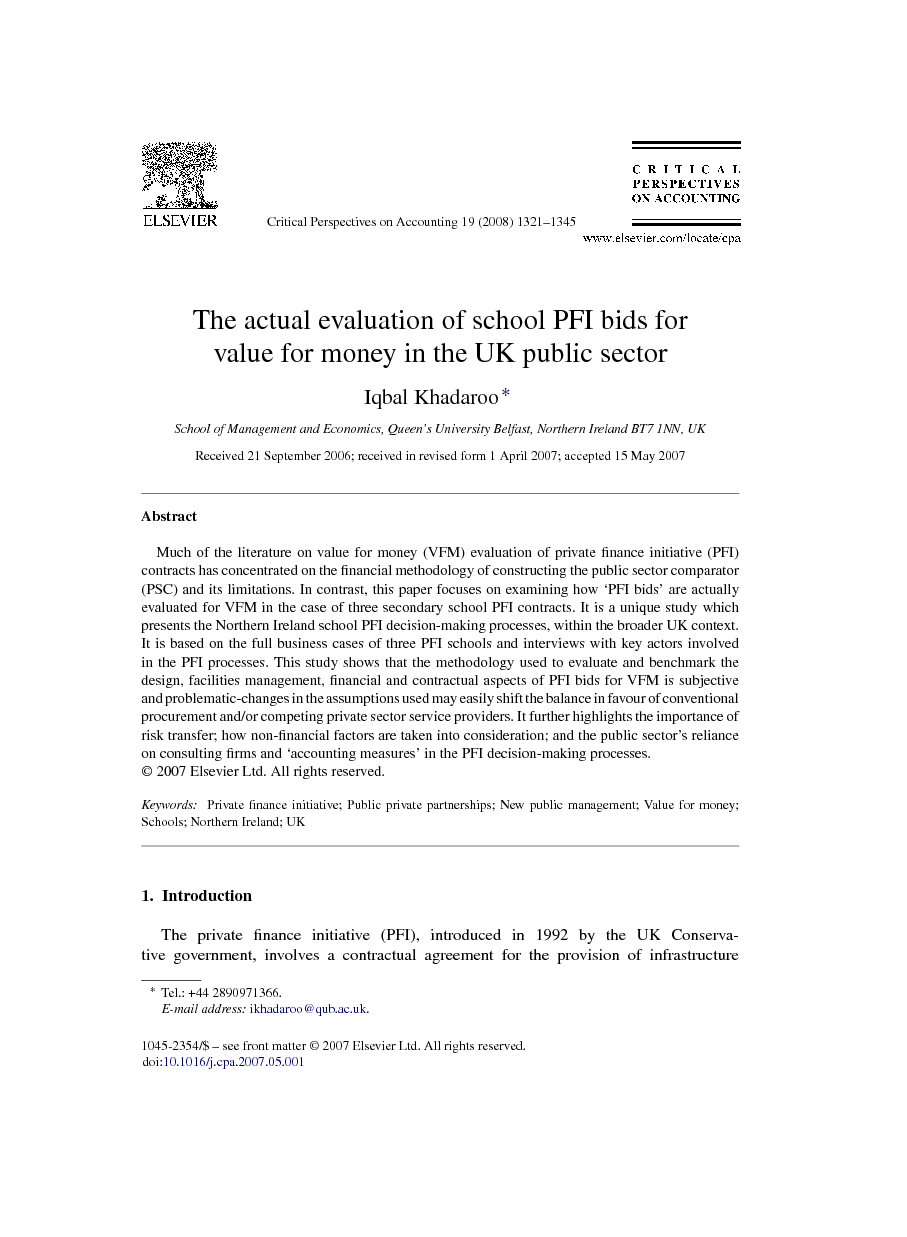 Much of the literature on value for money (VFM) evaluation of private finance initiative (PFI) contracts has concentrated on the financial methodology of constructing the public sector comparator (PSC) and its limitations. In contrast, this paper focuses on examining how ‘PFI bids’ are actually evaluated for VFM in the case of three secondary school PFI contracts. It is a unique study which presents the Northern Ireland school PFI decision-making processes, within the broader UK context. It is based on the full business cases of three PFI schools and interviews with key actors involved in the PFI processes. This study shows that the methodology used to evaluate and benchmark the design, facilities management, financial and contractual aspects of PFI bids for VFM is subjective and problematic-changes in the assumptions used may easily shift the balance in favour of conventional procurement and/or competing private sector service providers. It further highlights the importance of risk transfer; how non-financial factors are taken into consideration; and the public sector's reliance on consulting firms and ‘accounting measures’ in the PFI decision-making processes.

The private finance initiative (PFI), introduced in 1992 by the UK Conservative government, involves a contractual agreement for the provision of infrastructure related public services by a private sector consortium, in return for a stream of payments payable by the public sector. In 1997, it was adopted by the successive Labour government as part of the broader public private partnerships (PPP) reform agenda to modernise public services (Broadbent and Laughlin, 2005). The government posits that PFI offers better value for money (VFM) than conventional procurement, achieved through ‘optimal’ risk-sharing between the public sector and the private sector, and innovative design and delivery of public services by the private sector (HM Treasury, 1997 and HM Treasury, 2006). VFM, as illustrated later in the paper, is demonstrated through the ‘accounting quantification’ and comparison of the costs and benefits of the conventional public sector procurement option with the PFI option. Government departments mostly rely on HM Treasury guidance (for example, HM Treasury, 2003) and consulting firms to legitimise their preferred procurement option and demonstrate VFM. Since its introduction, the PFI policy has been subject to many theoretical and empirical debates. Most studies have explored the PFI decision-making processes and have raised concerns over accountability and VFM (see for instance, Broadbent et al., 2003, Broadbent et al., 2008, Broadbent and Laughlin, 1999, Edwards et al., 2004, Edwards and Shaoul, 2003a, Edwards and Shaoul, 2003b, Heald, 2003, Pollock et al., 2002, Shaoul, 2002, Shaoul, 2003, Shaoul, 2004 and Shaoul, 2005). For example, Heald (2003) explored the implications of risk transfer on VFM and the accounting treatment of PFI contracts on the public sector's balance sheet. From a distribution of economic wealth perspective, Shaoul (2005) critically examined the financial methodology used to appraise PFI projects in the case of hospitals. Recently, researchers have started to explore post project evaluation of PFI contracts to assess VFM and accountability in the underlying processes (see for example, Broadbent et al., 2004, Edwards et al., 2004 and Ismail and Pendlebury, 2006). To date, much of the literature on VFM evaluation of PFI contracts has concentrated on the public sector comparator (PSC) and its limitations. In contrast, this paper focuses on examining how school ‘PFI bids’ are evaluated for VFM after the initial decision to proceed with PFI has been made. It is a unique study of the Northern Ireland's experience of school PFI contracts, within the broader UK context. It is important to understand the methodology and the criteria used to evaluate PFI bids for VFM because it is in these processes that performance expectation regarding the delivery of PFI services are formed and transformed into binding legal agreements. The financial and non-financial criteria used to benchmark PFI bids for VFM may need to be followed by the respective government departments to monitor the progress of the PFI contract over its term of 25 years or more (Broadbent et al., 2003). This paper is organised into six further sections as follows. The next section provides a brief review of prior studies on VFM evaluation of PFI contracts to highlight the gap in the literature that this paper has attempted to address. The third section explains the research methodology used for collecting empirical data. The fourth section explains the PFI decision-making processes in the context of secondary schools in Northern Ireland. The fifth section discusses the risk-adjusted PSC used by the public sector to appraise PFI contracts for VFM. The penultimate section illustrates the methodology and criteria used to evaluate PFI bids for VFM. The final section discusses the empirical findings and concludes the paper.

PFI is deeply rooted in the government's ideological commitment to adopt new public management reform in an era where limited public funds are available for infrastructure development. The government has constantly used the VFM rhetoric to legitimise the increasing use of PFI to deliver public services. This paper has provided some empirical evidence on how PFI decisions are made in the education sector in Northern Ireland and how school PFI bids are actually evaluated for VFM at the micro organisational level (Broadbent and Laughlin, 1999). This study further demonstrated the importance of risk transfer; illustrated the use of ‘accounting measures’ to quantify the qualitative factors; and highlighted the public sector's reliance on professional accounting firms in the PFI decision-making processes. More specifically, this paper provides some evidence to suggest that the school PFI decision-making processes in Northern Ireland were heavily controlled by the local education authority and the DENI. There was a lack of ‘strategic’ planning of the education estate although the DENI is now developing a database detailing the state of repair of the schools in Northern Ireland. The PFI procurement process was dominated by the PFI and PSC comparison while inadequate attention was paid to the consideration of the implication of PFI on: the broader education estate, non-PFI schools, other parts of the public sector, and future generations of users and taxpayers. The fact that interviewees perceive PFI as the only option to obtain a new school casts doubts on the degree of objectivity in the VFM assessment process. The economic analysis of the PSC supports prior studies (see for example, Shaoul, 2005) that the financial benefits of the school PFI contracts were marginal (and negative in the case of two schools) and were dependent on the adjustments for risk transfer. Nevertheless, these projects were allowed to proceed by the DENI on the grounds that they were ‘pathfinders’. Moreover, the paper illustrated the process of ‘quantifying’ the various qualitative considerations used to evaluate PFI bids for VFM. It provided evidence that the PFI and PSC comparison includes assessment of non-financial criteria, at least in the case of the PFI option. However, the criteria used and the weightings were subjective and arbitrary; changes in the weightings may easily change the choice of the preferred bidder and/or shift the balance in favour of the traditional public sector procurement option. The problematic concept of VFM was reduced to a ‘cost per unit of benefit’ and formed the basis for making the final PFI decision and selecting the preferred service provider. However, an equivalent ‘cost per unit of benefit’ could not be computed for the conventional procurement option. The interviews further indicated that the headteachers and teachers in school 1 were more satisfied with the PFI building and services actually delivered primarily because of their ‘active’ involvement in the procurement process. The school has also been more specific in terms of framing the criteria used to appraise the PFI bids for VFM. There are additional complications stemming from the contractual nature of PFI and arrangement for monitoring of services. It is based on the premise that the services delivered would be ‘self-monitored’ and reported by the private sector. It also puts the burden for reporting service failures to the schools which are not signatory to the PFI contract. Although the payment mechanism is related to the service level agreement specified in the contract, the schools have no power over the private sector contractor and are unable to question the integrity of their monitoring reports and the underlying internal control systems. Moreover, the services criteria specified in the PFI contract may themselves become obsolete, for example, due to changes in the curriculum. Therefore, the public sector may be tied up into paying for unwanted facilities which in turn would have repercussions on the other parts of the education estate and the public sector. Moreover, the assessment of VFM in PFI contracts may be hindered by the lack of transparency and public accountability in PFI processes (see also, Edwards et al., 2004)—for example, the local authorities had to obtain legal advice and the approval of the private sector to release the full business cases of the PFI schools. Moreover, the actual PFI contract itself is not in the public domain. The scope of this research has been limited to studying the bid evaluation processes of school PFI contracts in Northern Ireland and as such any generalisation of the findings should be undertaken with caution. There are variations in actual practices in different parts of the public sector, across similar types of projects (as illustrated in this paper) and geographically. For example, Grimsey and Lewis (2005) pointed out that while ‘fully developed UK-type PSC approach’ is commonly used in Australia, it was not used in the road PFI projects in Ireland. A further limitation is that this project was not explicitly concerned with post project evaluation of school PFI contracts, although where relevant, it explored the interviewees’ perception of the VFM evaluation criteria at the post-implementation stage. Moreover, it did not explore differences in perceptions across interviewees and over time, which would have been beyond its scope. Future research might explore how PFI bids are evaluated for VFM in other parts of the public sector and in other countries to identify the VFM evaluation methodology used and highlight best practices. It might also be useful to further explore how VFM is actually perceived among the different types of stakeholders involved in PFI projects and how their perception of VFM changes over time. Such a longitudinal analysis would involve the development of “a more robust design for post project evaluation” and a follow-up of the financial and non-financial criteria used to evaluate PFI at the procurement stages (Broadbent et al., 2008, p. 30). Only through longer term evaluation that it would be possible to draw definitive conclusions on the VFM merits of the PFI policy.