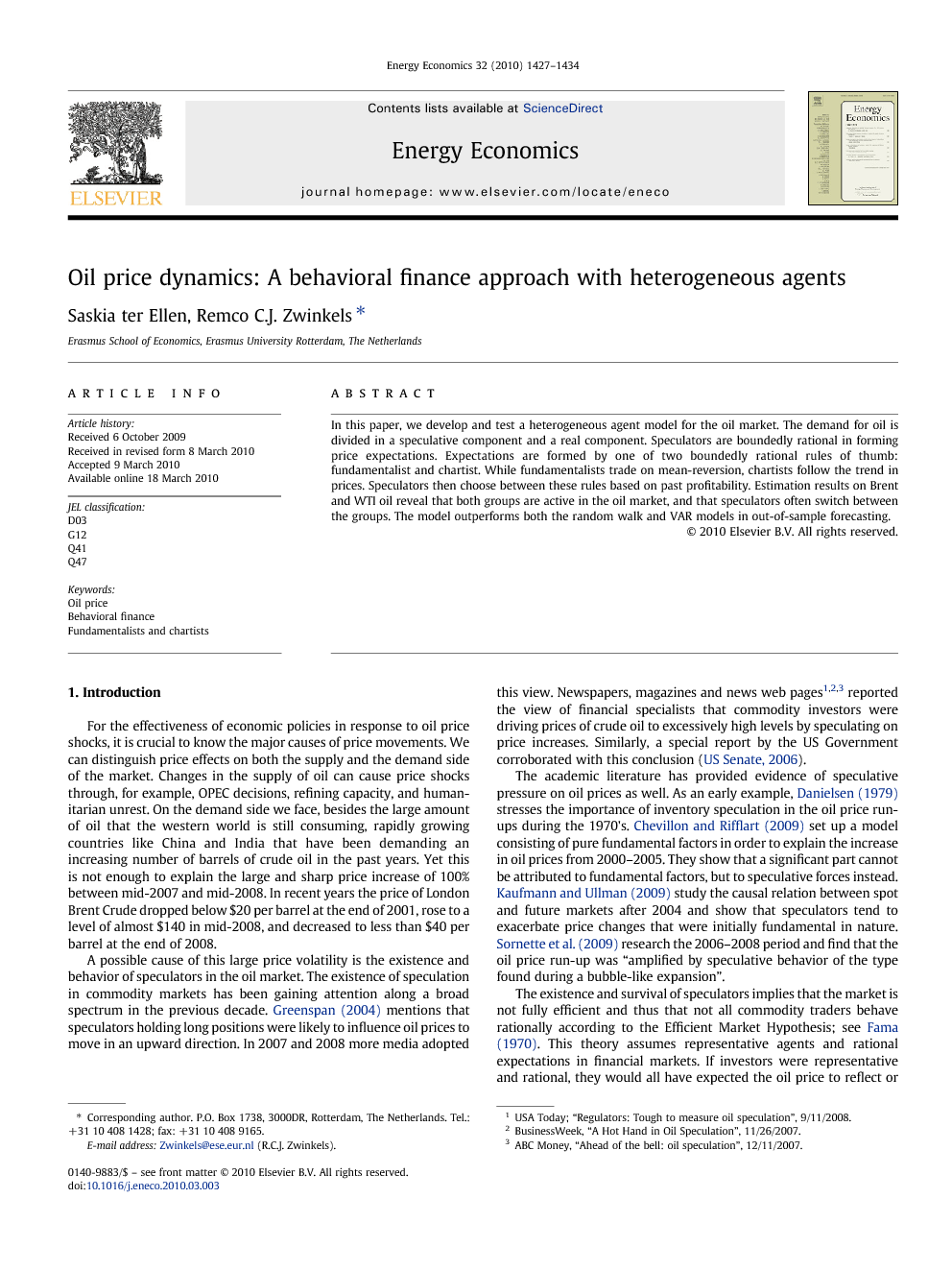 In this paper, we develop and test a heterogeneous agent model for the oil market. The demand for oil is divided in a speculative component and a real component. Speculators are boundedly rational in forming price expectations. Expectations are formed by one of two boundedly rational rules of thumb: fundamentalist and chartist. While fundamentalists trade on mean-reversion, chartists follow the trend in prices. Speculators then choose between these rules based on past profitability. Estimation results on Brent and WTI oil reveal that both groups are active in the oil market, and that speculators often switch between the groups. The model outperforms both the random walk and VAR models in out-of-sample forecasting.

In this paper we studied the presence and relevance of heterogeneous agents on oil prices. For this purpose we developed a simple and stylized heterogeneous agents model that incorporated the beliefs of and interaction between two types of investors, the fundamentalists and chartists, and their relation to the real consumers and suppliers of oil. The speculators could switch between different forecasting strategies. When acting like fundamentalists, investors expect the price to mean revert to its fundamental value. In the case of the implementation of technical analysis, investors expect prices to follow destabilizing trends. The performance of the two approaches depends on their performance in the previous months. The estimated results indicate heterogeneous expectations of investors in oil markets, as both strategies generated significant results. Prices are therefore, at least partially, determined by the various price expectations of the heterogeneous agents. Fundamentalists, who predict the oil price to converge on its fundamental value, have a stabilizing effect on the price of oil. On the other hand chartists usually have a destabilizing effect on the price of oil. Since they extract price movements from the past and predict that they continue moving in the same direction, their expectations drive the oil price further away from its fundamental value. The effects of the consumers and suppliers of oil are opposite such that their net effect on price changes is zero. The strongest results are given by the out-of-sample tests. The HAM is able to outperform the random walk model and VAR model on all horizons for both markets. The model put forward here is obviously highly stylized and simplified. For example, the agents that are distinguished in this paper are assumed to be homogeneous within their group. Furthermore, the functional forms of the two groups can be debated. Maybe even more pressing is the fact that the oil price depends on a much broader range of factors, like political issues, supply side (OPEC) strategies, refining capacity, etc. However, the HAM does provide a parsimonious model with economic interpretation, which is able to outperform standard econometric models. As such, it is a step forward.