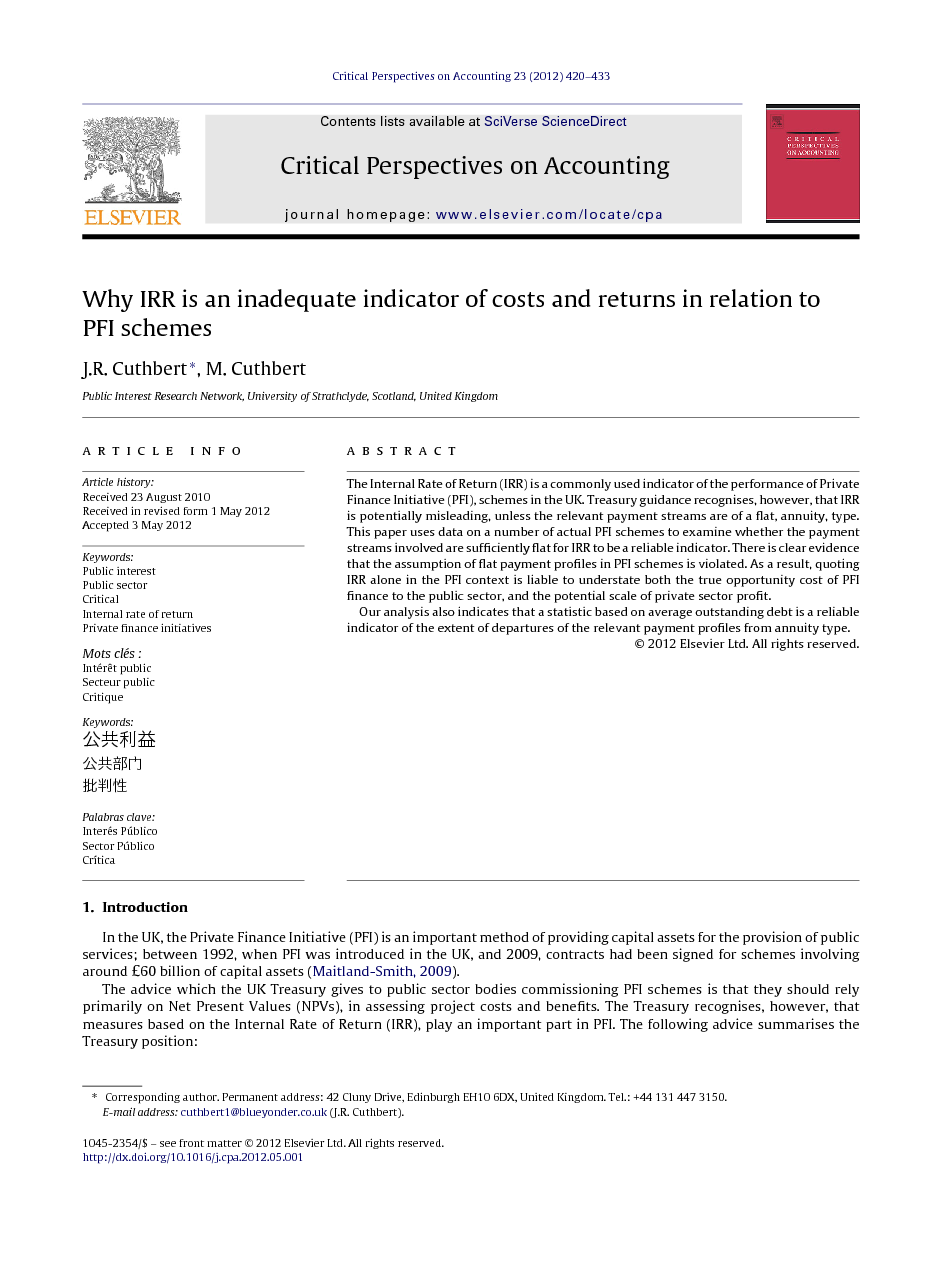 The Internal Rate of Return (IRR) is a commonly used indicator of the performance of Private Finance Initiative (PFI), schemes in the UK. Treasury guidance recognises, however, that IRR is potentially misleading, unless the relevant payment streams are of a flat, annuity, type. This paper uses data on a number of actual PFI schemes to examine whether the payment streams involved are sufficiently flat for IRR to be a reliable indicator. There is clear evidence that the assumption of flat payment profiles in PFI schemes is violated. As a result, quoting IRR alone in the PFI context is liable to understate both the true opportunity cost of PFI finance to the public sector, and the potential scale of private sector profit. Our analysis also indicates that a statistic based on average outstanding debt is a reliable indicator of the extent of departures of the relevant payment profiles from annuity type.

The primary finding of the study is that there is clear evidence that key payment profiles in real life PFI schemes do depart materially from flat, annuity style profiles; in other words, the Treasury assumption of flat payment profiles in PFI schemes is violated. This violation appears to happen in a consistent way, depending on the type of payment stream being considered. Moreover, the effect of these departures is material from the point of view of the IRR applications which we are studying. The implication is that quoting IRR alone in the PFI context is potentially significantly misleading, and is liable to understate the true opportunity cost of PFI funding to the public sector, and to grossly understate the potential scale of private sector profit. Secondly, our analysis indicates that a statistic based on average outstanding debt is a reliable indicator of departures of the relevant payment profiles from annuity type. This means that IRR alone should not be used in the type of PFI application considered in this paper. If IRRs are quoted, this should always be done in conjunction with an ancillary statistic, based on averaging outstanding debt over the period of the relevant transaction. Further, public sector PFI negotiators should be using average outstanding debt, in conjunction with IRR, as an indicator of potential excess profits in PFI schemes. Finally, our study indicates the importance of being able to examine actual data on how individual PFI schemes are projected to behave. Without access to the kind of financial projection data examined here, it would not have been possible to ascertain that the fundamental Treasury assumption of flat payment profiles did not actually hold in relation to PFI schemes; and hence it would have been impossible to ascertain just how misleading an indicator IRR is in the PFI context. The kind of financial projection data which we have analysed is, however, difficult to obtain. We conclude that there is a real need for protocols to be established to ensure that this kind of data is made available for researchers as a matter of course.