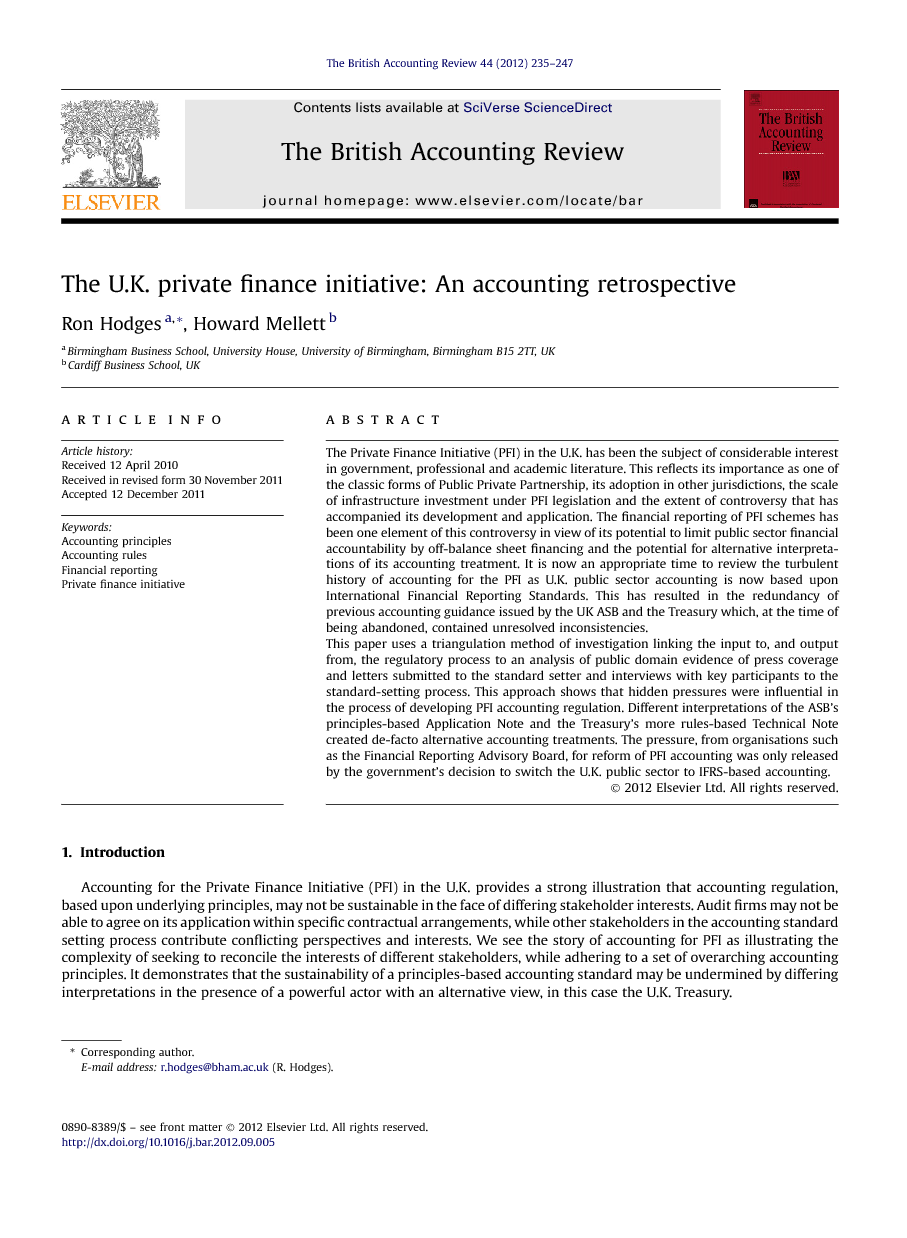 The Private Finance Initiative (PFI) in the U.K. has been the subject of considerable interest in government, professional and academic literature. This reflects its importance as one of the classic forms of Public Private Partnership, its adoption in other jurisdictions, the scale of infrastructure investment under PFI legislation and the extent of controversy that has accompanied its development and application. The financial reporting of PFI schemes has been one element of this controversy in view of its potential to limit public sector financial accountability by off-balance sheet financing and the potential for alternative interpretations of its accounting treatment. It is now an appropriate time to review the turbulent history of accounting for the PFI as U.K. public sector accounting is now based upon International Financial Reporting Standards. This has resulted in the redundancy of previous accounting guidance issued by the UK ASB and the Treasury which, at the time of being abandoned, contained unresolved inconsistencies. This paper uses a triangulation method of investigation linking the input to, and output from, the regulatory process to an analysis of public domain evidence of press coverage and letters submitted to the standard setter and interviews with key participants to the standard-setting process. This approach shows that hidden pressures were influential in the process of developing PFI accounting regulation. Different interpretations of the ASB's principles-based Application Note and the Treasury's more rules-based Technical Note created de-facto alternative accounting treatments. The pressure, from organisations such as the Financial Reporting Advisory Board, for reform of PFI accounting was only released by the government's decision to switch the U.K. public sector to IFRS-based accounting.

Accounting for the Private Finance Initiative (PFI) in the U.K. provides a strong illustration that accounting regulation, based upon underlying principles, may not be sustainable in the face of differing stakeholder interests. Audit firms may not be able to agree on its application within specific contractual arrangements, while other stakeholders in the accounting standard setting process contribute conflicting perspectives and interests. We see the story of accounting for PFI as illustrating the complexity of seeking to reconcile the interests of different stakeholders, while adhering to a set of overarching accounting principles. It demonstrates that the sustainability of a principles-based accounting standard may be undermined by differing interpretations in the presence of a powerful actor with an alternative view, in this case the U.K. Treasury. The PFI has been controversial since its inception in 1992 and it continues to have a high political profile.1 It has received the support of both Conservative and Labour governments in the UK and related capital outlays have been substantial; for example Treasury figures, at February 2010, indicated that 667 PFI projects had been signed with implied capital funding of over £56 billion and involving estimated commitments of £267 billion (Treasury, 2010). Such figures indicate the significance of the related accounting policy; in particular, the question of whether PFI obligations should be scored on or off balance sheet from the public sector viewpoint. The Office for Budget Responsibility (OBR) noted in its Fiscal Sustainability Report that Public Sector Net Debt at March 2010 ‘included about £5.1 billion (0.4 percent of GDP) in respect of PFI deals that were recorded as on balance sheet in the National Accounts’ but that ‘the total capital liability of on and off balance sheet PFI contracts was closer to £40 billion (2.9% of GDP)’ (OBR, 2011, p.42). Accounting for PFI is examined in this paper by considering how the Accounting Standards Board (ASB) adapted its regulatory proposals from an exposure draft (ASB, 1997) (ED) to the publication of an application note to FRS5 (ASB, 1998a) (FRS5A). All the changes made from the ED to FRS5A are triangulated with evidence from articles in the professional and financial press together with written submissions sent by respondents to the ASB. This evidence is used to identify those changes from the ED to FRS5A which are not explained by such public domain evidence and which reveal that other pressures must have been influential as the majority of recommendations proposed in the written submissions were not adopted by the ASB in FRS5A. The Treasury responded to FRS5A by revising its own Technical Note 1 How to Account for PFI Transactions (Treasury Taskforce, 1999) (TN), which was intended to guide the application of FRS5A in public sector financial statements. Interviews with key actors involved in the development of FRS5A and the TN are used to illuminate the process of developing the ED into FRS5A. In practice, different interpretations of FRS5A and the TN created de-facto alternative accounting treatments. The result was that PFI assets and the related borrowing obligations could end up on both or neither of the balance sheets of the private and public sector partners to a PFI scheme (FRAB, 2006b). For example, Heald and Georgiou (2011) suggest that the Audit Commission was more likely to accept a TN-based view to support an off-balance sheet treatment than the National Audit Office. Similarly, private sector auditing firms took different views on the appropriate accounting treatment when tested with identical scenarios (FRAB, 2006c). In its 2007 Budget (para. 6.59) the U.K. Government announced that the accounts of central government departments and the wider public sector would be produced using International Financial Reporting Standards (IFRS) from 2008. The implementation was subsequently deferred to 2009 in the 2008 Budget2 (para. C.103). One of the effects of this move to IFRS was that the existing guidance on accounting for the PFI issued by both the ASB and the Treasury ceased to be applied to public sector financial reporting, being replaced with IFRS-based guidance (Treasury, 2011a, chap. 6, pp. 11–16). The contribution of this paper lies in its detailed examination of the forces that attempted to influence the content of FRS5A and the subsequent effect of this on the practice of PFI accounting. Its originality stems from three features of the paper. First, it provides a detailed triangulation method, relating the input and output of the regulatory process to available public domain evidence to identify that unseen influences must have been present. The authors are not aware of any published work that has adopted this approach previously to analyse the development of accounting regulation. Second, the paper is able to review retrospectively the complete cycle from initial development to effective withdrawal of FRS5A and hence build on prior work that, necessarily, dealt with only the contemporaneous position. This paper covers the development of FRS5A, leading to the interpretation of its principles through the TN which culminated in considerable disquiet on the part of the Financial Reporting Advisory Board (FRAB). Third, the paper analyses the initial impact on PFI accounting of the move to IFRS-based reporting. The switch to international standards released the pressure towards a fundamental revision of PFI accounting under UK GAAP (FRAB, 2007) and has resulted in the increased recognition of PFI deals in the balance sheets of UK public sector entities (Treasury, 2011b).

The approach used in this paper has shed light on the reasons for the problems encountered when developing and applying an accounting treatment for the public sector reporting of PFI schemes. Prior research has revealed the sharp divide in the interests and opinions of groups of PFI stakeholders suggesting that there was little common ground between them. The submission letters and press comments of important stakeholders such as the Treasury and both the private and public sector counterparties to PFI deals seem antagonistic to the ASB’s position. This paper reveals that the submissions by accounting firms and professional bodies can also now be viewed as only partially satisfied by the process as the majority of changes proposed by them were ignored; perhaps the individual firms saw enough flexibility for their particular, but different, interpretations to be covered. The principles-based approach adopted by the ASB in FRS5A may be seen as an attempt to achieve a common understanding to thwart misinterpretation (Nelson, 2003), but it did not encompass the practical issues involved in its application to specific contractual schemes, leaving these to the Treasury to determine through its TN. Furthermore, the ASB’s lack of formal authority over public sector accounting in the UK opened the door to the Treasury’s interpretation and guidance, on the basis that ASB standards, created for private sector application, needed to be modified for use in the public sector. Such modifications appear to be a routine aspect of U.K. public sector financial reporting, although they may be layered and opaque (Ellwood, 2008). Although this paper deals with a relatively specialised aspect of accounting practice, the research method described could be used to analyse the influences on any accounting standard setting body operating a system of due process involving the publication of discussion papers, position statements and regulatory proposals together with lobbying evidence such as written submissions to the standard setter, minutes of internal meetings and reports of open meetings and round-table discussions. This paper has illustrated a ‘black box method’ to study the development of accounting standards and has demonstrated the need to study accounting regulation in a more holistic manner than simply using written submissions. Extending consideration to the press can give an indication of what was going on behind the scenes but still, even taken in its entirety, the information in the public domain is not sufficient to explain the observed changes; interviewing participants can provide rich insights to help bridge this gap.This study has several limitations. First, it does not purport to identify the influences that affected the drafting of the ED; in other cases, it may be possible to move further back in the process and examine, for example, the wording of research reports or discussion papers and then analyse the changes between these documents and the subsequent ED. Second, the approach cannot directly identify the exact nature of the unseen influences that have shaped accounting regulation. In this case, we are able to assert that such influences must have existed and exerted influence over the regulatory outcome. In order to identify the possible sources of those influences, it is necessary to obtain other forms of evidence which are outside public domain sources; for example interviews with members and technical staff of the standard setting body and those who may have lobbied them during the exposure period. Third, this study is unable to provide a direct explanation of why the ASB arrived at its solution. A rationalist view would be that the ASB applied strict logic, based on accounting concepts, while a more critical analysis would see the outcome being at least influenced by intuitions of public policy. This retrospective analysis has identified that the process of developing PFI accounting regulation was flawed in two significant respects. First, the proposals of the ASB lacked the support of important PFI stakeholders and second, the availability of an interpretive TN from the Treasury, created an unstable accounting environment resulting in alternative interpretations of FRS5A. A fundamental review of PFI accounting in the U.K. was only avoided by switching UK public sector accounting to an IFRS basis.