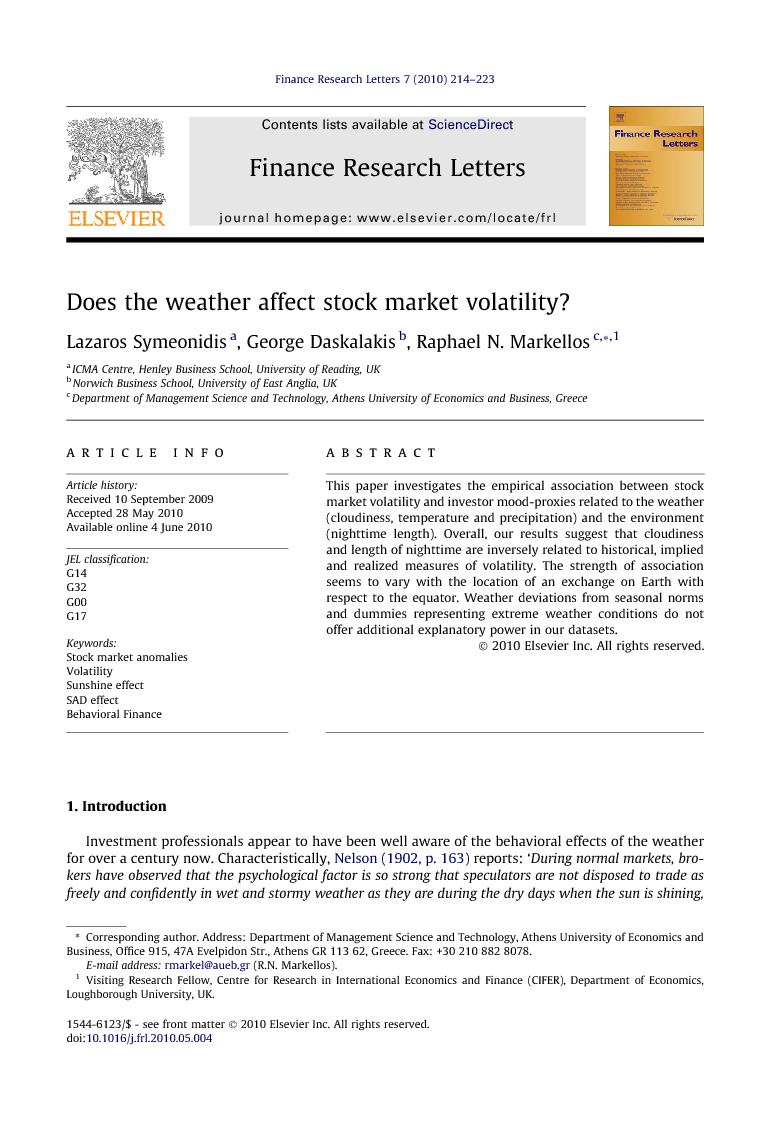 This paper investigates the empirical association between stock market volatility and investor mood-proxies related to the weather (cloudiness, temperature and precipitation) and the environment (nighttime length). Overall, our results suggest that cloudiness and length of nighttime are inversely related to historical, implied and realized measures of volatility. The strength of association seems to vary with the location of an exchange on Earth with respect to the equator. Weather deviations from seasonal norms and dummies representing extreme weather conditions do not offer additional explanatory power in our datasets.

The empirical results in this paper suggest that SAD and cloudiness are negatively associated with various measures of stock market volatility. In line with Dowling and Lucey (2008), we find that historical volatility according to a GJR-GARCH(1, 1) model is significantly inversely related to the mood-proxies associated with cloudiness and variation in nighttime hours for 26 stock exchanges and cities internationally between 1982 and 1997. Despite the fact that we use a latitude-corrected SAD-proxy, we find that the effect of this variable depends on the location of a city on Earth with respect to the equator. Our results concerning implied volatility and realized volatility offer some additional support. Specifically, implied volatility indices for the CBOE and realized S&P 500 index returns tend to be negatively related with cloudiness and variation in nighttime hours. However, the underlying coefficients are statistically significant only in a pooled sample of four implied volatility indices. The direction of association for the SAD-proxy and the VIX implied volatility index is consistent with that reported by Kaplanski and Levy (2009). Our disparity with respect to statistical significance is possibly due to the adoption of a different sample. In general, our analysis suggests that absolute deviations of weather variables from seasonal norms and dummies related to extreme weather conditions do not offer additional explanatory power in attempts to model volatility. Our results are consistent with the explanation that good mood is associated with increased trading and volatility, respectively. As mentioned, it could also be the case that we are simply observing the indirect result of the ‘leverage effect’. Our results are unlikely to be influenced by data-snooping since we use several different but comparable volatility datasets to evaluate our hypothesis and we validate our results, when possible, using subsamples of our original data. It would be useful to evaluate also the economic significance of our results, as in Hirshleifer and Shumway (2003). However, building volatility trading strategies is far from straightforward since it requires combined derivative positions. This note adds to the empirical literature but does not extend our theoretical understanding of the relationship between weather and financial markets. The psychological effects involved in weather are both interesting and complex and deserve further research. A potentially useful direction could consider the heterogeneity in trade responsiveness to weather and environmental-related changes in mood. For example, Levy and Galili (2008) show that males, low income, and young individuals tend to be net buyers on cloudy days. To the extent that these groups have differences in characteristics such as risk aversion, the variations in investor mix could affect intertemporal market returns and volatility. We believe that it would also be interesting to explore rational causes in addition to the behavioral explanations that have been discussed. For example, extending the arguments by Goetzmann and Zhu (2005), if market participants tend to leave early on rainy days in order to beat the rush, then we can expect a negative impact of cloudiness on liquidity and volatility, respectively. Indeed, as Loughran and Schultz (2004) demonstrate, trading volume is significantly lower during blizzards in a city, since investors may take longer to get to work as a result of, for example, the need to shovel snow or dig out cars. This leaves less time for trading. In general, during bad weather it can be expected that commuting times of investors will also be significantly longer. Alternative explanations could be based on the effect of weather on the cognitive behaviors of market participants (see Keller et al., 2005, inter alia). It could be that volatility increases due to weather-related shifts in information consumption by investors. It is well known that social interaction has a significant effect on stock prices (Hong et al., 2004). It could be that during sunny weather investors tend to socialize and communicate more which increases the amount of effective information and volatility.