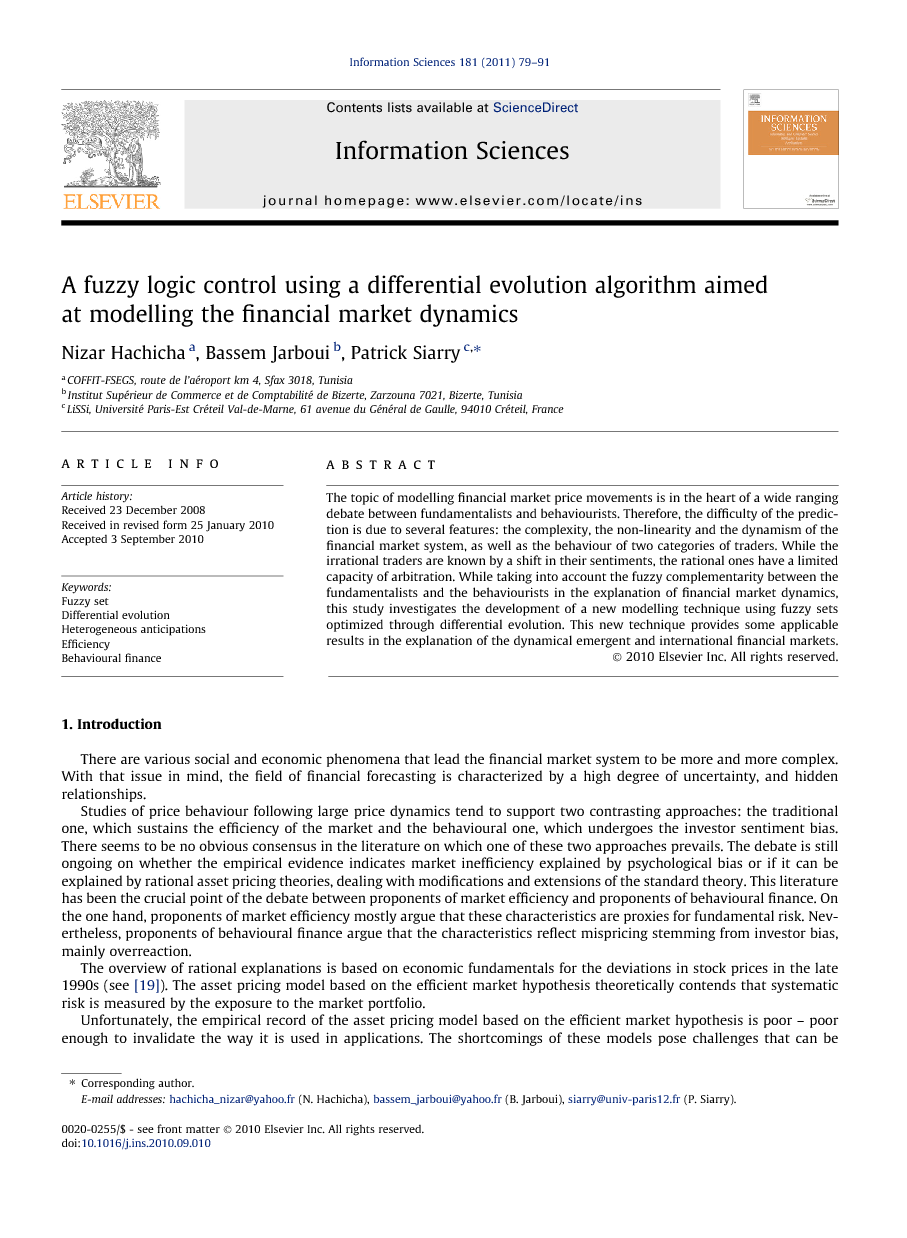 The topic of modelling financial market price movements is in the heart of a wide ranging debate between fundamentalists and behaviourists. Therefore, the difficulty of the prediction is due to several features: the complexity, the non-linearity and the dynamism of the financial market system, as well as the behaviour of two categories of traders. While the irrational traders are known by a shift in their sentiments, the rational ones have a limited capacity of arbitration. While taking into account the fuzzy complementarity between the fundamentalists and the behaviourists in the explanation of financial market dynamics, this study investigates the development of a new modelling technique using fuzzy sets optimized through differential evolution. This new technique provides some applicable results in the explanation of the dynamical emergent and international financial markets.

The results of return modelling through our optimized fuzzy system showed an improvement compared to the classical logical system (for both the emergent market and the international market). This improvement was materialized by the reduction of the RMSE. The new system exhibited in this study proved an obvious capacity to take into account the extreme values. The results of the optimized membership functions and fuzzy rules were nearly identical for both markets. The principal findings that can be highlighted from this study are three in number. First, market returns and size effect always present a strong and meaningful effect for the two sectors and the two markets. Second, book to market effect is uncertain: either it presents a positive and meaningful effect, or a negative effect or it does not present any effect. Third, the effect of sentiment investor differs, according to the sector. For the banking sector, this effect does not have any impact on the return. On the other hand, for the non banking sector, it presents a high explanatory power. This result is in concordance with the efficiency theory and the behavioural finance. According to these theories, the banking (non banking) sector presents the nearest (farthest) portfolio efficiency. Our results confirmed our prediction and our choice of the appropriate employed technique within our modelling. Apart the obvious explanatory power provided by our system in the stock price dynamics, we found: • For the banking sector portfolio in the international market reputed the most efficient among the four portfolios, the psychological variable is not introduced in the explanation of the stock price dynamics. In the other side, i.e. for the non banking sector portfolio in the emergent market, reputed the most inefficient among the four portfolios, we observed that the micro-structural and the psychological variables take a large explanatory power in the explanation of the price process. • For the two mediator portfolios between efficient and inefficient, i.e. the non banking sector portfolio in the international market and the banking one in the emergent market, results were hyper-obvious. We found an impact of the micro-structural variable in the stock price dynamics, but with a small extent compared with the non banking sector portfolio in the emergent market. On the other hand, the intervention of the psychological factor appeared only for the important value. Those findings verify that those portfolios pass through efficient periods and inefficient ones. Those findings add several important points to the modelling world of the stock price dynamics justified by the strong explanatory power, namely the concretization and the modelling of all explanatory theoretical ways in a complementary and simultaneous manner: • the non-necessity to verify the market efficiency to know which model we can take into account in our modelling; • the utility of taking into account the uncertainty of the participation of the explanatory variables in the stock price dynamics; • the utility of taking into account the nature of the relation between the explanatory variables and the stock price dynamics. This relation is supposed to be linear in the literature review. Finally, from the findings of our model, we can judge the efficiency degree of each portfolio, as well as of each market, considering the contribution or not of the micro-structural and psychological variables.