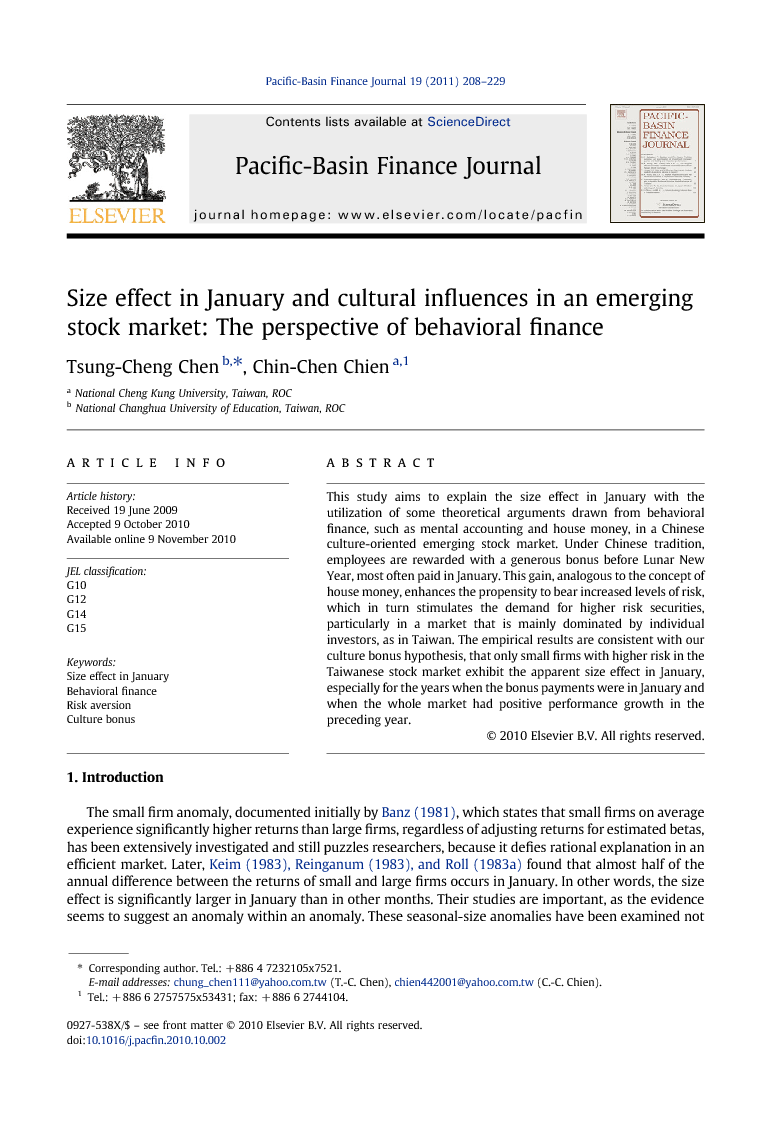 This study aims to explain the size effect in January with the utilization of some theoretical arguments drawn from behavioral finance, such as mental accounting and house money, in a Chinese culture-oriented emerging stock market. Under Chinese tradition, employees are rewarded with a generous bonus before Lunar New Year, most often paid in January. This gain, analogous to the concept of house money, enhances the propensity to bear increased levels of risk, which in turn stimulates the demand for higher risk securities, particularly in a market that is mainly dominated by individual investors, as in Taiwan. The empirical results are consistent with our culture bonus hypothesis, that only small firms with higher risk in the Taiwanese stock market exhibit the apparent size effect in January, especially for the years when the bonus payments were in January and when the whole market had positive performance growth in the preceding year.

The small firm anomaly, documented initially by Banz (1981), which states that small firms on average experience significantly higher returns than large firms, regardless of adjusting returns for estimated betas, has been extensively investigated and still puzzles researchers, because it defies rational explanation in an efficient market. Later, Keim, 1983, Reinganum, 1983 and Roll, 1983a found that almost half of the annual difference between the returns of small and large firms occurs in January. In other words, the size effect is significantly larger in January than in other months. Their studies are important, as the evidence seems to suggest an anomaly within an anomaly. These seasonal-size anomalies have been examined not only in sophisticated stock markets such as the US, UK, and Canada, but also in the Asia-Pacific emerging markets.2 Yates et al. (1997) documented that people living in Asian cultures tend to suffer from more behavioral biases than those in Western cultures. Kim and Nofsinger (2008) further indicated that it will be useful to understand the cognitive biases of Asians from the perspective of behavioral finance. Especially in an emerging market of mainly individual investors rather than institutional investors, such as Taiwan, the security market is a good place to look for anomalies, and learn why they exist.3 Moreover, in contrast to the numerous studies related to the pattern or relationship of stock returns and firm size, there has been very limited research related to the cause of the size effect in January, although risk mismeasurement, economic cycle, different information, and tax-loss selling hypotheses have been suggested. The purpose of this paper is thus to explore the cause of the small firm anomaly in January for Taiwan, from the interaction view of culture with behavioral finance. Under Chinese tradition, employees are rewarded with a generous bonus before Lunar New Year, most often paid in January, for working hard in the past year and to encourage them to work harder in the following year. For example, in 2006 China Steel Corporation, CPC Corporation, Chunghwa Telecom, and Fubon Financial Holding Company granted bonuses equivalent to 5, 4.6, 6.6, and 5 times monthly salaries, respectively. In the literature related to seasonality, several studies have exhibited the impact of Chinese culture on Asian stock markets, namely Chinese New Year effect, that there is a consistently up-moving trend prior to the Chinese Lunar New Year (Wong et al., 1990, Cadsby and Ratner, 1992, Tong, 1992, Lee et al., 1993, Yen and Shyy, 1993, Chan et al., 1996, Yen et al., 2001 and Mcguinness, 2005). We posit that the implications of these culture bonuses on the size effect in January can be developed by incorporating important behavioral features, due to the limited processing ability, which are usually neglected in previous studies.4 First, the concept of mental accounting states that most people behave as if they have a mental accounting system which violates the principle of fungibility (Thaler, 1985 and Thaler, 1999).5 Specifically, some mental accounts, such as the house money account or the windfall income account, are less risk averse than others, such as the regular income account. Second, in contrast to monthly salaries, the Lunar New Year bonus should be analogous or closer to the house money or windfall income.6 Notably, a larger bonus than expected is more likely to be viewed as house money by investors, and this increases rather than decreases their propensity to take risk.7 Likewise, as the Chinese New Year is an auspicious and euphoriant holiday that people generally have more optimistic prospects for the future, and thus underestimate risks, these culturally driven bonuses should increase risk-taking and willingness to buy stocks when the money is received. Thus, we predict that the Lunar New Year bonus in the form of a lump sum will be treated differently from regular income, even if being paid the bonus is a sure thing, and so it should make individuals less risk averse in January. This will cause a surge in demand for higher risk securities in a market that is mainly dominated by individuals. Moreover, in general small firms have higher risk than large ones. Therefore, we propose a culture bonus hypothesis and expect that the demand for small-cap stocks, especially those with high volatility which are generally regarded as having higher risk, will increase and cause the size effect in January to appear in Taiwan's stock market. We use the monthly stock returns data, and utilize the Fama–MacBeth method for empirical purposes. For completeness, we test the culture bonus hypothesis as well as alternative hypotheses offered in prior research. We also conduct exhaustive sensitivity tests for robustness. All the findings are consistent with the culture bonus hypothesis that the Taiwanese stock market, especially for firms with higher risk, exhibits the small-cap effect in January. Moreover, after taking into account the time and amount of the bonus payments, the results indicate more support for the culture bonus hypothesis. The major contribution of this research is to expand the existing literature into another dimension that incorporates cultural factors with behavioral finance, and fill the gap in the literature on the causes of seasonal-size anomalies for Pacific-Basin Chinese stock markets. The next section describes all the hypotheses that have been tested for the size effect in January in previous studies. Section 3 describes the data and methodology. Section 4 presents the empirical results and analyses, and the final section concludes this paper.

The small firm anomaly in January has been examined extensively for several decades and still puzzles researchers as well as practitioners. This paper attempts to explore this issue in an emerging stock market of mainly individual investors with a Chinese cultural orientation from the perspective of behavioral finance. As stated by Kim and Nofsinger (2008), the topic of behavioral finance in Asia is important and interesting, and will be useful in understanding the cognizance of Asians and the impact of the participants' decision-making on financial markets. We analyze how the tradition of rewarding employees based on a generous bonus before Chinese Lunar New Year can change attitudes toward risk, and how this change can affect the individuals' decision making in choosing the targeted shares. Taiwan's stock market is mainly dominated by individual investors, and is thus more likely to be affected by changes in investor attitudes toward risk when they are awarded their bonuses. The individual investors become less risk averse and prefer high risk shares, as represented by small-cap stocks, especially those with a higher volatility. Thus, if the small firm anomaly in January can be explained by concepts from behavioral finance, then we would find this phenomenon in Taiwan, particularly for small-cap stocks with higher risk. We utilize the Fama–MacBeth method to test our hypothesis, named the culture bonus hypothesis, as well as several alternative hypotheses offered in previous studies. We do not test the tax-loss selling hypothesis, because no tax is imposed on capital gains from security trading in any of the three markets. We also do not test the different information hypothesis, because there is no such information system as the Institutional Brokers Estimate System Tape (IBES) in Taiwan. However, we test the risk mismeasurement and the economic cycle hypotheses for completeness. Our hypothesis is supported by the finding that only the higher risk firms experience a strong small firm effect in January for Taiwan. Notably, this effect is more evident when the bonus payments were made in January, and when the market had positive performance growth in the preceding year. Moreover, the risk mismeasurement and the economic cycle hypotheses were not confirmed for Taiwan. Our findings suggest that a relationship exists between the size effect and cultural influences, and that behavioral finance remains a rich field for future research.