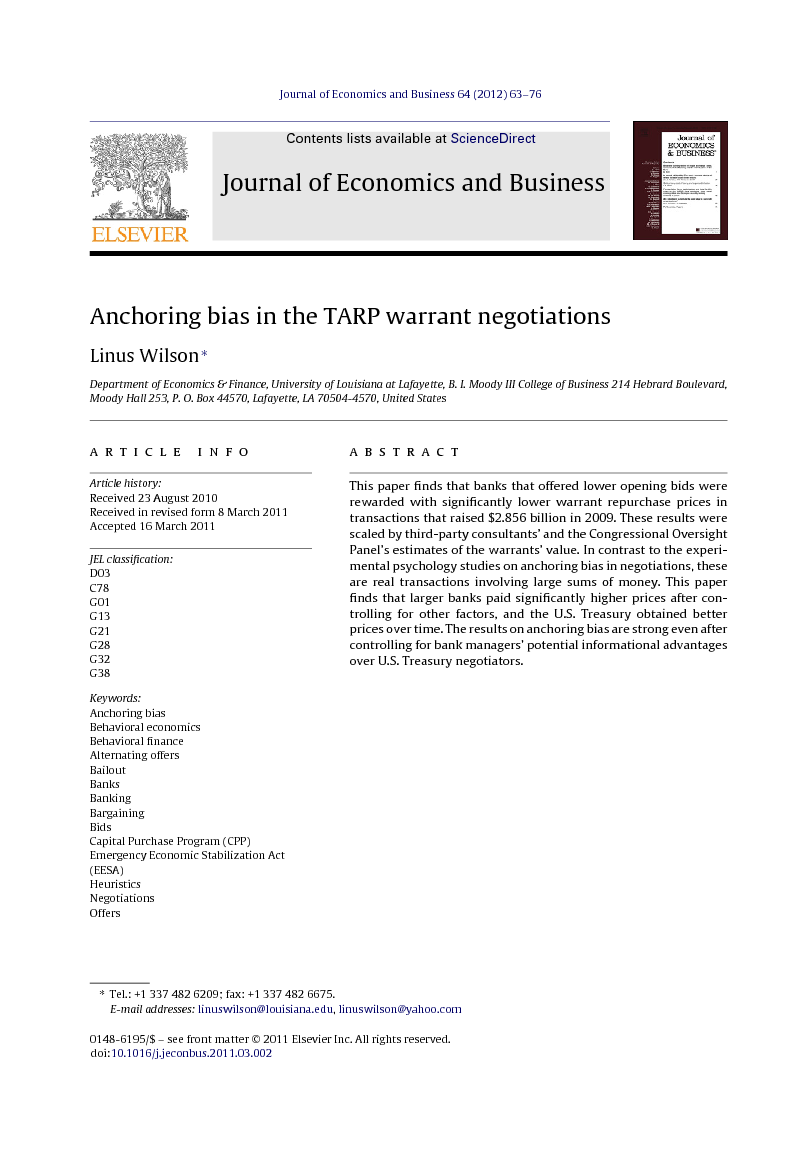 This paper finds that banks that offered lower opening bids were rewarded with significantly lower warrant repurchase prices in transactions that raised $2.856 billion in 2009. These results were scaled by third-party consultants’ and the Congressional Oversight Panel's estimates of the warrants’ value. In contrast to the experimental psychology studies on anchoring bias in negotiations, these are real transactions involving large sums of money. This paper finds that larger banks paid significantly higher prices after controlling for other factors, and the U.S. Treasury obtained better prices over time. The results on anchoring bias are strong even after controlling for bank managers’ potential informational advantages over U.S. Treasury negotiators.

This study indicates that banks that started out offering lower prices in warrant negotiations with the U.S. Treasury paid lower prices. According to model 3 in Table 2, a bid that was 50 percent of a third-party consultant's opinion of fair market value, would lead to a 5.68 percent lower price than an opening bid of 60 percent of fair market value. (In other specifications, the anchoring bias effect was even stronger!) Unlike laboratory studies involving small sums of money, the twenty-eight negotiations studied led to nearly $2.9 billion changing hands. Thus, anchoring bias appears to be important for big negotiations as well as small ones. The U.S. Treasury's apparent susceptibility to anchoring bias could cost U.S. taxpayers hundreds of millions—if not billions—of dollars. Since banks make the first bid and all subsequent bids until acceptance in the TARP warrant negotiations, anchoring bias favors banks at the expense of taxpayers. These results of anchoring bias are strong even when controls for the presence of the asymmetric information are introduced. The data in the current study are, of course rely on correlation, not controlled experiments. The author did not randomly manipulate initial bids. Thus, no claims can be made about a causal relationship between initial bid and final purchase price. In order for that relationship to be considered an example of the anchoring bias, it would have to be the case that the initial bid is irrelevant information, unrelated to the true value of the warrant. Although banks are free to make any initial bid they like, it is possible that initial bids carry information about the true worth of the warrant. That is, initial bid and final purchase price may both be driven by other information about the warrant's value. I addressed this possibility by scaling bids and purchases prices by an objective evaluation of worth and by statistically controlling for asymmetric information held by bank managers but not the Treasury Department. Even after these statistical controls, the relationship between initial bid and final purchase price remained robust, suggestive of an anchoring effect. These results indicate that the U.S. Treasury could have obtained better prices for the TARP warrants if its negotiators were not swayed by the bids of the banks. The U.S. Treasury negotiators should follow the advice of Galinsky and Mussweiler (2001) about focusing not on the offer but on the alternatives to a negotiated settlement. These taxpayer representatives should ignore these irrelevant anchors and focus on the valuations of their advisors. Very little significance should be placed on the opening bid. The TARP warrants have value both as securities that can be sold to third party investors and as options that can be exercised at some point in the future. In short, taxpayers may have better options than any lowball initial offer by the warrant issuer may suggest. This study also found evidence that the prices as a percent of the third-party consultant's estimates fair market value trended upward over the period, albeit at a decreasing rate. This is consistent with the theory that the U.S. Treasury learned how to get better deals as time went on. This finding is also consistent with the hypothesis that a combination of the press coverage, the Congressional Oversight Panel (2009b)’s report, criticism from studies such as Wilson (2009b), and Congressional involvement pressured U.S. Treasury negotiators and bankers to make more lucrative deals for taxpayers. Ironically, any time trend effects cannot find any support in regressions scaled by the Congressional Oversight Panel (2010)’s estimates of the TARP warrants agreements. Thus, we should exercise some caution before we conclude that the U.S. Treasury has gotten better deals for taxpayers over time. Yet, there is evidence that larger banks paid a higher percent of the third party constants’ and Congressional Oversight Panel's (COP) estimates of fair market value. This also could be due to the greater political pressure on the larger banks.